Census Flashback: Party Till You Drop

In anticipation of Life of the Party, which is about Melissa McCarthy returning to college and wreaking havoc on the frat scene, this week I'll be visiting the hallowed halls of the psychosexual campus slasher Rush Week. 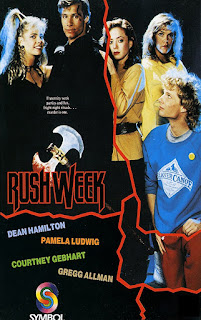 Just when you think you've seen every college-set slasher that the subgenre has to offer, the indefatigable 80's horror morass regurgitates yet another one. 1988's Rush Week has all the hallmarks of a slasher I shouldn't care about very much. Too non-paranormal to keep up with the post-Elm Street trend that made the late 80's so weird, too generic to justify the lack of gore that resulted from the MPAA's severe crackdown on the genre after it dominated theaters for the better part of a decade. Fortunately, Rush Week actually wasn't a slog, which is oh so unusual at this point in the project. Let's dive in, right after some good, wholesome plot synopsis! 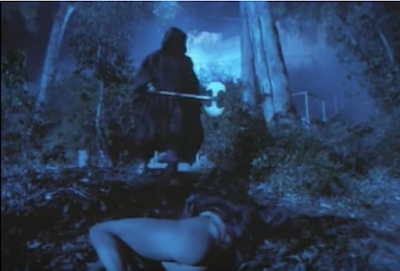 Part of a balanced breakfast.

So, it's Rush Week at Tambers College, and as is oh so likely to happen when a bunch of nubile fraternity and sorority students cavort together, a cloaked, axe-wielding murderer is cutting a trail of carnage across the proceedings. The only person who seems to notice that people are mysteriously disappearing is Toni Daniels (Pamela Ludwig), a new journalism student who has been working with the college paper.

Even though everyone in her life suspiciously warns her away from investigating these murders, including her carefree hippie professor Cosmo Kincald (Gregg Allman, of the Allman Brothers Band. Yeah, I don't know why either), the weirdly-obsessed-with-moral-purification-and-the-sanctity-of-death Dean Grail (Roy Thinnes), and her dreamy new love interest Jeff Jacobs (Dean Hamilton), a frat president who's clearly hiding a dark secret about his past. And that's just the tip of the suspect iceberg. I won't go too far into that, but I do want to mention some slasher royalty we have among us. As Julie Ann McGuffin, the killer's first victim, we have Halloween 4's Kathleen Kinmont, and as a totally useless pervy frat guy literally credited as "Peeper" we have Friday the 13th: A New Beginning's unforgettable Dominick Brascia.

Anyway, the killer is clearly trying to wipe out the moral corruption of the Greek system, as exemplified by Jeff's fraternity's increasingly wicked prank war with a rival frat. Naturally, this is accomplished by killing the women involved with said fraternity, because it ain't a slasher movie without a healthy dose of misogyny. 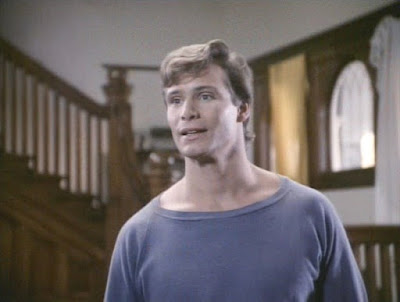 And Dean Hamilton isn't objectified nearly as much as I want him to be.

I've already mentioned what I could tell before even viewing one second of Rush Week. This isn't a gooey, gory romp through the best kills the slasher has to offer. No, it's almost pathetic in how boring and rote its murder sequences are: Killer raises the axe. Girl cowers in just such a way that you think her top might slip off. Killer swings the axe. Cut to next scene. This is repeated no fewer than three times with nary a drop of blood to be found, and by the time the final two kills show up with their run-of-the-mill but at least drippy special effects, the momentum has long been lost.

Usually, gore is the only reason to watch these movies, because it's not like the filmmaking or plots tend to be anything to write home about. But Rush Week does succeed in a lot of little ways that don't quite make it great, but at least worth watching in spite of that very major drawback. For one thing, it's actually a pretty solid whodunit. The red herrings are probably a bit obvious in how hyperbolically creepy they are (and one late-in-the-game plot twist makes so little sense, it might actually count as surrealism), but focusing the plot on a plucky young reporter rather than a generic campus cop or something really does help keep you invested.

It's just plain fun to follow Toni Daniels through the various obstacles and clues she faces along the way to discovering who the killer is, and the fact that the people who are backing up her research are all women (including several sources, a biology student who can test blood, and a computer whiz) makes up for at least an ounce of how skeevy the rest of the movie tends to be. Plus, Pamela Ludwig is actually kind of good. Legitimately great even, in at least one scene. In the moment before her first kiss with Jeff, you can see her face awash in a whirl of different emotions; distrust, desire, nervousness, calculation, and eventually surrender. It's one of the only slasher romantic scenes that's actually hot, and it's all because of the microscopic, expertly handled facial cues we get to watch as she sorts out her feelings. 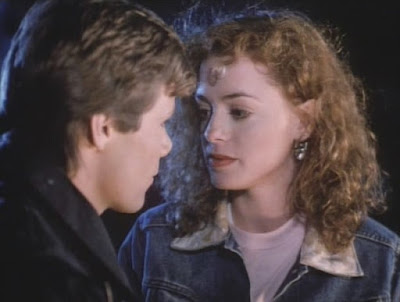 OK, maybe it doesn't work in a freeze frame, but she's terrific, I promise.

So we have a semi-talented lead, and she's given semi-amusing dialogue. A personal favorite of mine is "Is it alright if I call you Toni?" "You can call me anything you like." "Can I call you tomorrow?" It's not Billy Wilder, set-the-Earth-on-fire work, but it's just something a little more than you can usually expect to get from one of these films. There are people who were actually trying when they were making this movie, and that does count for a lot.

There's also no denying that the killer here is actually pretty scary. To start, his weapon is consistent from start to finish (this almost never happens), which is great because it's a massively imposing medieval axe that cuts a striking silhouette. But the costume itself is actually kind of alarming. At first all you see is a cloaked figure, getting only the barest glimpses of a face in the shadows. But the more you see of the killer, the more you realize that his face won't tell you anything, because it's a mask that's just lifelike enough to be convincing in shadow, but nevertheless completely uncanny and menacing when it's revealed. Check it: 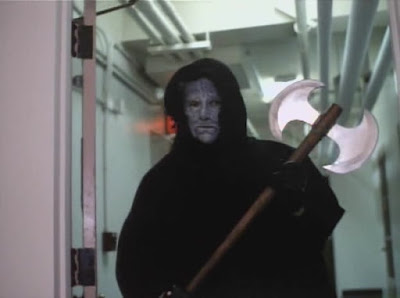 Again, maybe screenshots don't do this movie justice. Or maybe I'm just in this project waaaaay too deep.

Well, whatever. It's an entertaining thrill ride for the most part, and I'm not gonna spit on that. There are still those little reminders that this is a crummy slasher movie, both on the filmmaking level (take the foley work, which goes completely out of control anytime it has to render footsteps - they never match the characters' walks, to the point that you think somebody might actually be following them), and the way it treats the female characters who aren't Toni.

I can have fun with gratuitous nudity as much as the next guy (a girl meditating topless in a college classroom is certainly a first), but some of the material here is just gross, especially with the character of Alma. She's literally just a prostitute who the frat hires to satisfy their pledges (a truly unusual slasher character, from the beginning), who they play their cruelest, most vicious prank on for absolutely no reason, and who does not deserve the bloody comeuppance she is handed. I'm actually glad the kills aren't prolonged, gory, or numerous, because the way they play out time and time again is by far the least appealing aspect of a movie that's actually quite charming quite a bit of the time.

Rush Week is good for what it is, even though what it is isn't a very good thing at all. But in the terms of what I've had to sit through for Census Bloodbath, it's a slam dunk. That's probably a sad thing, but I've made this bed and I've got to lie in it.

Killer: [Dean Grail (Roy Thinnes)]
Final Girl: Toni Daniels (Pamela Ludwig)
Sign of the Times: A major plot point revolves around the fact that Toni got a message on her computer, and only very few people have the technical skill to figure out how to do that.
Best Kill: Dean Grail is decapitated by axe in what is more or less the only gore moment in the movie, so it's not much of a contest.
Scariest Moment: Arnold the Creeper is pursuing Toni through the halls of the science building and immediately runs afoul of the real killer, who bursts through a doorway and murders the hell out of him.
Weirdest Moment: An accordion player prances around the preppy frat's party.
Champion Dialogue: "You can't row a boat with a limp rope."
Body Count: 5
TL;DR: Rush Week lacks the gore it needs to be an exemplary late-80's slasher, but the plot and characters are strong enough that it's nevertheless enjoyable.
Rating: 6/10
Word Count: 1529
Also sprach Brennan at 7:48 AM