When I Sleep, I Dream And It Gets Me By 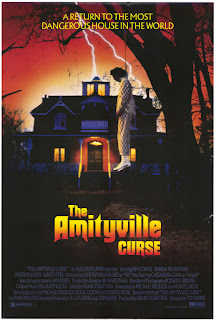 And… here’s where this marathon is going to get tough, as if it wasn’t a hard pill to swallow from square one. After fending off the direct-to-video doldrums for four entries and eleven years, the swiftly declining haunted house series succumbed to the pull of its mediocre horror destiny with its fifth entry, The Amityville Curse.

At this point, I can’t help but worry that my reviews will begin to deteriorate, as there are only so many variations on “boring and poorly made motion picture goes through the motions of a haunted house thriller” that I can pull out of my brain. But let’s see if I can squeeze a few more drops out of this godforsaken franchise, shall we? 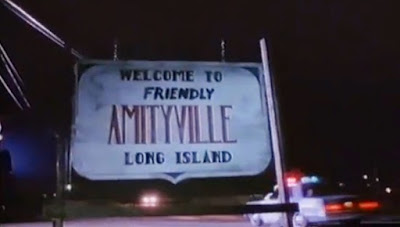 Lord knows Hollywood seems to be able to.

Well, at least there’s some semblance of a plot. Let’s talk about it. Twelve years after a priest (Jan Rubes) is shot to death in a confessional, his dilapidated house is bought by newlywed couple; Marvin (David Syerin) and Debbie (Dawna Wightman). It’s a surprise they’ve managed to stay together even this long, because they quite transparently loathe each other. Debbie is a psychic who has been receiving visions in her dreams of evil forces lurking in the house, and Marvin is a psychologist skeptic who scoffs at everything she believes in and stands for.

The couple is joined for the week by three friends who for some reason have agreed to drop everything and help them remodel the house. They promptly set into acting like a bunch of randy teens because this is a horror movie, even if they’re patently too old to be behaving this way. These bizarre houseguests include horny sex couple Abigail (Cassandra Gava) and Frank (Kim Coates of Sons of Anarchy in an early role), and Bill (Anthony Dean Rubes), about whom we know nothing other than he has a penchant for wearing stripes. Bill is by far the most mysterious thing in the movie, much more so than the shadowy presence who is bumping off the people in the house, starting with the one-eyed neighbor Mrs. Moriarty (Helen Hughes).

Also, spooky paranormal things happen, but they really take a back seat to scenes of remodeling and half-baked drama about Abigail’s fidelity. 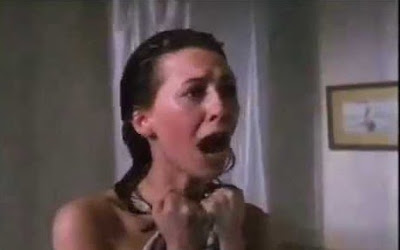 Though that drama is so blink-and-you’ll-miss-it that you’d need a Clockwork Orange machine for it to even register.

As you may have noticed, this is the movie where the franchise really starts to lose the plot. Even the “haunted floor lamp in California” entry has stronger ties to the events of The Amityville Horror than Curse, which contents itself to merely present a paranormal story that takes place in the same town. As if Amityville, Long Island was built over a Hellmouth or something. As much as it behooves the franchise to break from the limiting confines of the “true” Amityville story, you just can’t expect to succeed when you oust the franchise’s most consistent and compelling character: the house, with its iconic arched, angry windows.

That house and its excellent expressionistic design went a long way toward delivering the chills even in the chintziest, most boring sequences the franchise had to offer. And The Amityville Curse is nothing if not chintzy and boring. The anonymous, squat pile of bricks at the center of Curse sucks out every last molecule of atmosphere, revealing the disappointingly bare foundation that all of these films have been built on.

The Amityville Curse revels in its own tedium, unspooling scene after scene of character interactions that have just enough flavor for you to despise every one of the players involved, but yet not enough to actually pique even the slightest amount of interest in their dealings. The plot seems to center around the vague shape of a mystery, but it’s so ineptly handled that the Huge Twist is something I just took for granted like 20 minutes in. There’s nothing to latch onto for at least an hour, other than a handful of lines written with an iota of pith and one or two shock gags that you can find scary if you really focus. 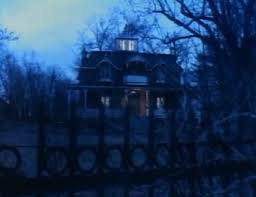 Forgive me for trying to feel something while sitting through this movie.

The only truly interesting thing about The Amityville Curse is that, by the end of the third act, it completely forgets that it’s a ghost movie. You see, the mysterious figure who has been murdering the hell out of folks turns out to be an actual flesh and blood human being, and just like that we have a slasher film on our hands. The Amityville Curse is so much of a slasher, in fact, that had this been released a year earlier, I would have had to strongly consider including it in Census Bloodbath.

And wouldn’t you know it, Debbie is actually a pretty capable Final Girl. Drawing inspiration from other hardcore heroines in terrible movies like The Demon or Lady Stay Dead, she gets creative when she’s in survival mode, using saw blades as Frisbees and even giving us a passable gore gag when crushing the killer’s fingers in a door.

Of course, this trick didn’t make me like The Demon or Lady Stay Dead any more, so it certainly doesn’t do the trick with The Amityville Curse. Ten relatively thrilling minutes don’t make up for all that wasted time sitting through this movie when I could have been doing something more interesting and rewarding, like watching a leaky roof drip water into a bucket, or pricking my own finger with a thumbtack.