We Were Both 16 And It Felt So Right 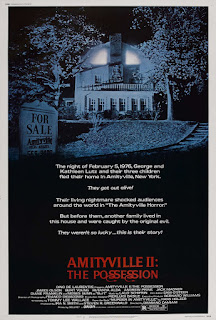 It’s rare that a sequel surpasses the original, but especially in the horror genre. Fear thrives on the feeling of the unknown, and the nature of a sequel intrinsically diminishes that. There are but a scant few Part 2’s that could even dream of considering themselves superior to their predecessors, but I would like to take this moment to herald a film that has now joined that elite group: Amityville II: The Possession. Mind you, The Amityville Horror was an exhausting bore, so it’s not like it was much of a challenge. 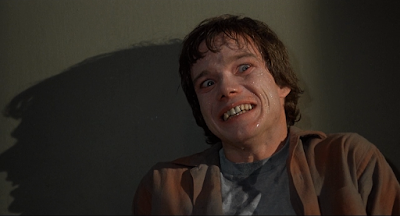 This is gonna be a great October, I can feel it.

Amityville II is a confusing beast. It’s generally accepted that it’s a prequel to the original film (it’s loosely based on the DeFeo murders, which occurred before the Lutz family took residence), but there’s nothing in the movie itself to suggest any sort of coherent time frame. It begins and ends with a “For Sale” sign, which could fit it literally anywhere in the Amityville chronology. And though the story allegedly takes place in the mid-70’s, the production crew didn’t make even a nanoscopic attempt to make it look that way, chucking it full of Sony Walkmen, Rocky posters, and abominable hairstyles that could only have existed in the aesthetic dark age that we called 1982. 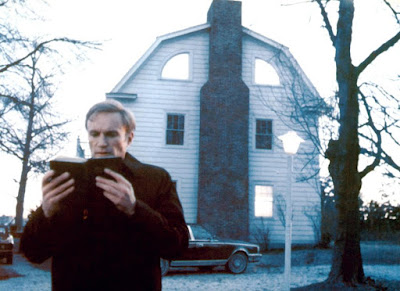 And unlike Rod Steiger previously, Olson is actually in this movie.

Only two films in, the Amityville franchise had already changed hands. The original film came from American International Pictures, which died a painful death shortly after the release, despite its phenomenal box office take. So  he sequel landed in the hands of infamous Italian schlock producer Dino De Laurentiis. Say what you will about the man, but this was the best thing for the nascent series. Whatever the sequel was going to be, it couldn’t’ help but be stupid, and De Laurentiis knew how to make stupid movies fun.

And Amityville II doesn’t mess around. Practically from minute one, the rubbery 80’s effects are flowing in full force. Just like in the original, the shock gags slowly boil into a crescendo, but here we start with bonkers mayhem like paint brushes flying around the room and whole dish racks exploding. This is a full-on effects spectacle, at the expense of anything but the most broad-strokes characterizations, but the trade-off is well and truly worth it for a film that isn’t so boring you’d want to crack the disc in half and stab it into your leg just to feel something.

It’s more of a campfest than anything, as cemented in by Burt Young’s over-the-top, belt-slinging greaseball character and Rutanya Alda’s reliably demented, bug-eyed performance. Plus, it’s just plain weird, casually introducing an incest plot line between Sonny and Patricia that’s more or less calmly accepted or ignored by the world at large. There’s also this tendency for the blocking to constantly arrange the characters like they’re posing for a family portrait. It attempts to drive home the impact of their family unit shattering, but it’s mostly just hilariously awkward. 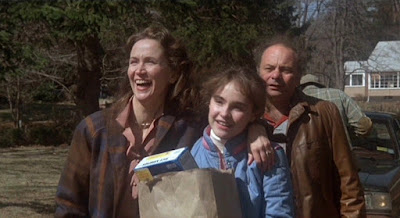 But really, Amityville II is pretty well put-together. The roving camera makes use of the house (and especially the creepy eye-like windows) in an actually spooky way, and there are a smattering of images that remind you that directors can do more than just point the lens at action if they really want to. There’s also a tremendously clever bit of sound design involving a ticking clock that I found genuinely chilling.

For an hour or so, Amityville II chugs along, amiably delivering silly effects showcases and Sonny’s theoretically disturbing descent into madness. Then it abruptly slams on the brakes, grinding to a halt with the late, unfortunate decision that what people really wanted to see was more of this Father Adamsky fellow. For forty grueling minutes, we’re forced to watch James Olson being put through the aces of a horrifyingly transparent Exorcist rip-off. The movie never regains its footing after that, forcing viewers through a crushing gauntlet of boring scenes of characters we’ve never met and couldn’t possibly care about. It fails to be redeemed by the allegedly showstopping effects of the final ten minutes because of how grotesquely detailed it is in mimicking the plight of one Father Karras. 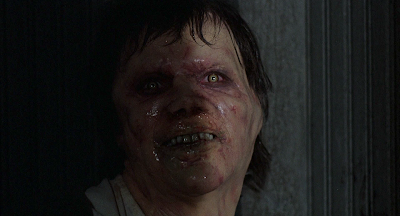 The power of Christ compels you to shut this movie off!

The ending of this movie is so imbalanced and tedious that I very nearly forgot every last scrap of enjoyment I gleaned from the genuinely charming opening hour. My advice would be to eject the DVD at about 71 minutes, then use that extra time to rearrange your sock drawer, a task that I promise you’ll find more interesting than the third act of Amityville II.

But still, it does clear that low, low bar of improving upon The Amityville Horror when you average it all out. I wouldn’t call that a recommendation, but if you had the stomach for the first one, you can certainly brave wading at least one film deeper into this alarmingly sprawling franchise. Why this series felt the need to continue I’ll never know, but if the films all improve upon the last at this rate, Amityville Dollhouse will be a flat-out masterpiece.