It's Everywhere I Go, It's Everything I See 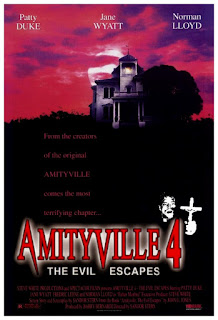 I’m writing some of these reviews ahead of time because there are so damn many to get through, and cramming all these viewings into the span of one month would strain my hair-pulling muscles. If you’ll permit a peek behind the curtain, I’d like to tell you that it’s been a full month and a half since I’ve sat through an Amityville film. As much as I enjoyed Amityville 3-D, it took that long for my spirit to recover from the lashing that the original Amityville trilogy inflicted upon it.

It was with great trepidation that I stuck my toe back into the water of this franchise, but I’m pleased to report that – for the time being, anyway – Amityville has seemed to settle at the blissfully dumb register of mid-range horror sequels, which is really all I ask. After 3-D’s dismal box office got the franchise booted out of theaters and set on hiatus for six long years, the TV movie gods saw fit to resurrect it in the shape of a Patty Duke vehicle dubbed Amityville 4: The Evil Escapes. And this is not a drill, it’s about a haunted lamp. 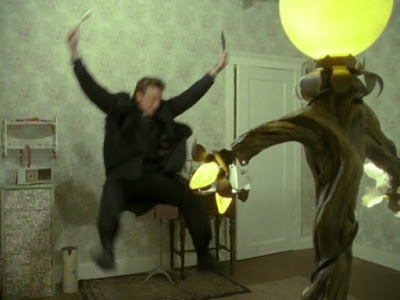 I live for these moments.

Amityville 4 opens the way every haunted house sequel should: six priests descend upon that dastardly Long Island home with the glaring eyes it pretends are windows, and they exorcise the f**k out of it. They appear to be successful, minus the fact that the studly, cleft-chinned Father Kibbler (Fredric Lehne, who has had a thriving career appearing in one to three episodes of every show you’ve ever watched on a hotel TV set while waiting for your turn to take a shower) was sent to the hospital after a nasty encounter with a possessed floor lamp that looks like it sprouted straight out of the opening credits of Hannibal.

Wouldn’t you know it, but a hapless antique shopper (Days of Our Lives stalwart Peggy McCay) with a pronounced sense of irony picks up the very same lamp at a yard sale and ships it off to her sister Alice (Jane Wyatt) for her birthday, but not before cutting herself on a jagged edge and dying of a mysterious infection. As luck would have it, the lamp arrives at Alice’s seaside California abode on the very same day as her mostly estranged daughter Nancy (Patty Duke), who was recently made a widow by a husband her mother never approved of. In tow are her three kids: teen daughter Amanda (Zoe Trilling, for whom this would not be the last horror sequel – her credits include Night of the Demons 2 and Leprechaun 3), pre-adolescent son Brian (Aron Eisenberg of Star Trek: Deep Space 9) and blonde moppet Jessica (Brandy Gold), who almost immediately begins talking to the lamp as if its her dead father.

As tensions rise between mother and daughter, the haunted lamp uses its power over household appliances to terrorize the family as it attempts to possess Jessica, for reasons of… I don’t know, evil or something. 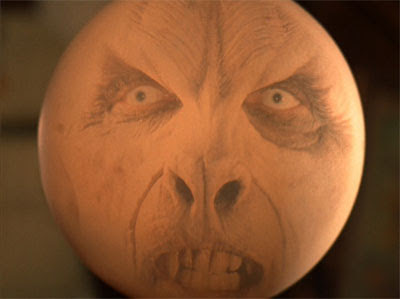 Look, the fact that there’s even a plot at all is remarkable. Let’s not push it.

Sandor Stern, the auteur who wrote and directed Amityville 4, has a prior link to the franchise, having penned the screenplay for the original film. One would think this would be a detraction, given how messy and overlong that movie is, but honestly it’s a recipe for bad movie magic. With the street cred of having created the massively successful The Amityville Horror, its seems like he was given carte blanche to duck down whatever narrative rabbit holes he wished, and he did so with ravenous gusto.

Amityville 4 is bananas. It doesn’t have the budget to give us the truly ridiculous rubber creature antics of The Possession or 3-D, but the crackerjack “haunted lamp” idea is just the tip of the iceberg. We get people strangled with lamp cords, severed garbage disposal hands attacking plumbers, and what can only be described as a basement chainsaw battle between a young boy and an elderly maid. The script drops the ball on some of its most interesting ideas (the chainsaw sequence could have led to some good intrigue that sputters and stalls almost instantly, and the “Golden Girls vs. haunted lamp” movie the opening scene promises would almost certainly have been better than what we get), but the random fragments it has are still totally nuts.

Also, apropos of nothing, there’s a scene shot at the same high school as A Nightmare on Elm Street, so that’s rad.

But as much as Amityville 4 fails to cash in on some of the more interesting plot threads, the story at the core is completely solid. It’s all blandly functional boilerplate, there’s no two ways about it, but it’s a decently acted, reasonably engaging way to pass the time between fun fair fright gags. It might help a teensy bit that all the male side characters are extremely easy on the eyes, but in these marathons I must use every foothold I can get.

I’m not here to pretend that this movie is a great piece of filmmaking or a compelling diamond in the rough. But it’s affably dumb, and what more could you want from the fourth entry in a franchise that was already rotten from the beginning? The filmmaking doesn’t come anywhere close to the heights of The Amityville Horror, but The Evil Escapes has an eminently watchable quality that the original lacks.

It might not boast the subtly chilling horror of muzzle flashes as viewed through the windows of a house in a nerve-shattering static shot, but it has a moment where an elderly woman suddenly develops super-strength and throws a floor lamp through an attic window onto a rocky beach, whereupon it explodes like it has been soaked in kerosene. That’s good enough for me.

P.S.: I didn’t have anywhere to put this in the article, but I had to mention the fact that there’s a sequence that opens with the teen daughter dumping two entire huge bowls of salad into a garbage disposal, and if that’s not the most beautifully insane way to motivate a scene, I don’t know what is.