I Can Make Believe That You're Here Tonight 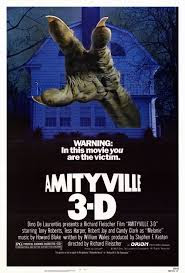 This is the moment I’ve second most been looking forward to in our Amityville marathon (the number one anticipated moment being Ryan Reynolds taking a bath, but we’ve got quite a lot to trudge through first): the infamous 3-D entry! Not only is Amityville 3-D the third film in the franchise, it’s the final third of the trifecta of Part 3-D’s that plagued the early 80’s, after Friday the 13th and Jaws had both had their wicked way with the format.

The 3-D gimmick promises a lot. It promises hilariously obvious sequences of people slowly poking long objects into the frame. It promises lengthy, unmotivated shots of glass bursting or flies buzzing that make way less sense in the unconverted 2-D edition. But most of all, it promises that the movie will embrace 80’s cheese in a profound, completely earnest way that the other entries steadfastly refused to.

This is what I need from a motion picture.

Finally the franchise has dropped the “based on a true story” conceit, untethering itself from the constraints of boring, hoax-fueled reality and instead telling a fictional story based around the real life house. Things immediately go bonkers, in the best way possible. Here’s the plot.

John Baxter (Tony Roberts) is a famed paranormal debunker who buys the Amityville house for two reasons. 1) to prove that the myths and ghost stories surrounding it are a bunch of hooey, and 2) the rent is spectacularly cheap and he needs a place to live now that he and his wife Nancy (Tess Harper) are divorced. They fight over whether this is the proper place for their daughter Susan (Lori Loughlin), who is constantly pushed into séances and other wicked shenanigans by her mischievous best friend Lisa (Meg F**king Ryan).

John insists that her fear of the house is brought on by superstition and paranoia, but the house insists otherwise and a series of increasingly disturbing events begin to occur within its walls.

Fortunately, the rent is to die for.

I’m just gonna let it all hang out: Amityville 3-D is the best of the original Amityville trilogy. It’s probably uncouth to heap such praise on a gimmicky haunted house sequel, but it’s a heady cocktail containing the best of the previous two entries. It maintains the goofy, effects-lade Dino De Laurentiis charm of Part 2, marrying that to the persistent slow boil of the original while trimming the fat that marred both those entries with a turbo-charged chainsaw.

The only thing the film truly lacks is a sense of the motivation of the evil presence in the house. It’s not trying to accomplish anything other than just being generally evil any way it can. That lowers the stakes just a teensy bit, but in exchange we get an unusually coherent plot with reasonably well-etched characters. Baxter’s attempt to find a way to define himself outside of his marriage just so happens to coincide with his pathological need to debunk ghost stories, creating a ripe conflict when his ex-wife demands that her daughter not be allowed to set foot inside his new home. There’s a complexity here that blasts the previous episodic narratives right on out of the water.

Plus, these characters are given life by a set of actors who actually had the talent to maintain reasonably successful careers, toning down the camp sensibility that made it hard to take Part 2 seriously as a horror film. And one of them is Meg Ryan! I’ve discovered a lot of skeletons in actors’ closets in my time, but this is by far one of my favorites. 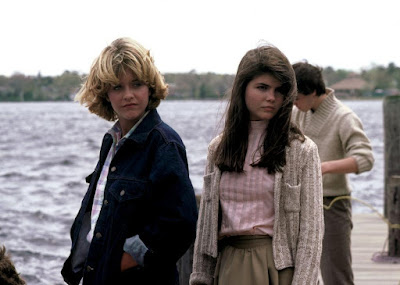 I’ll have what she’s having.

By dint of including actually interesting characters, Amityville 3-D also manages to generate some choice frissons of tension that really work. They can sometimes center around silly effects setpieces, like a memorable gag set in an elevator, but they’re subdued just enough to retain a crucial glint of reality.

Not only does Amityville 3-D place its scare gags in an arrangement that actually builds up to something, they’re also some of the best in the series. A personal favorite of mine would be the walls slowly closing in on John as he works in the bathroom. And I dare any Amityville film to conjure up an image as starkly bone-chilling as the scene where Nancy sees her daughter silently climbing the stairs, dripping wet, just as John is at the lakeside, watching her be pulled from the depths by paramedics.

Sure there are some ludicrous and indefensible developments (the Portal to Hell in the basement being a huge one), but it’s all part of the roller coaster ride the film provides. For every nugget of decent family drama, you get a Frisbee slowly arcing directly into your face. It’s not a Bergman film. As long as you have it in your heart to accept the goofy along with the intense, you’ll have a good time. 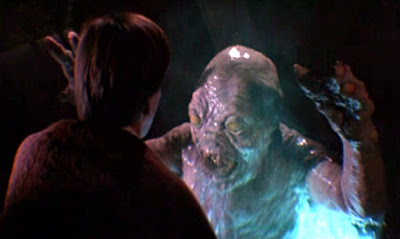 And be warned: it gets GOOFY.

I’m actually a little scared by how much I enjoyed this movie. This franchise got off to a rocky start. And considering the fact that this entry was a box office failure, forcing the next half-dozen entries to be released direct-to-video, we will surely plummet back down to a rocky middle. So I don’t want to get my hopes up. But this third entry has been an oasis; a bright spot that has renewed my motivation to push forward through the franchise with vigor.

I wouldn’t go so far as to say Amityville 3-D justifies the existence of the entire godforsaken franchise, but it’s at least a reminder of why I attempt these projects. It’s a diamond in the rough, made even more valuable by the swill it finds itself surrounded with. It perhaps doesn’t stand in the pantheon with the best of 80’s horror, but it’s a solid, reliable spook-em-up. Really, that’s all I want from any of these movies.