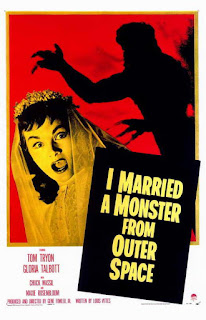 October is just flying by, isn’t it? We’re already on our second Cardboard Science review (in my annual crossover with Hunter Allen of Kinemalogue), and Halloween is right around the corner! But why don’t we take a breather from desperately trying to figure out what our costumes are going to be, sip on a mug of warm cider, and rejoice in the most spectacularly titled 50’s sci-fi movie there ever would be: I Married a Monster from Outer Space. 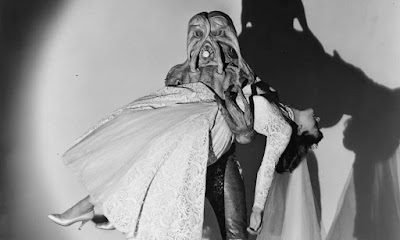 I couldn’t come up with a better title if a million dollars were on the line.

The thing that I find most unique about this movie is how, unlike its similarly titled brethren like I Was a Teenage Werewolf or I Bury the Living, the title character making that particular exclamation is – get this – a woman. I know, right? Almost accidentally, the premise gives protagonist status to an actual 50’s housewife and, whether it intends to or not, it draws its horror from the Rosemary’s Baby vein of a woman struggling against the fact that so much of her world is dominated and controlled by the men in her life.

That woman is Marge Bradley (Gloria Talbott), who is happily engaged to her strapping fiancé Bill Farrell (Tom Tryon, who really does cast a striking figure with his impossibly broad frame and chiseled cheekbones). Unfortunately, on the way home from his bachelor party, Tom is kidnapped by an alien creature that disguises itself as him and returns home. After the wedding, “Bill” acts unusually cold and distant, and a year later Marge is beginning to regret how much different her husband seems to be from the man she thought she was marrying. She finds out exactly how different he is one night when she follows him on a midnight stroll to his spaceship and witnesses his alien form firsthand.

Her desperate pleas to authorities for help lead her to discover that the aliens are slowly taking over all the men in town, and she’s forced to stay with Alien Bill – putting up a front that nothing is wrong – until she can find somebody who believes her and who hasn’t already been taken over. 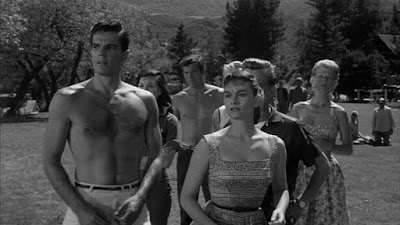 But can you really blame the aliens? Who wouldn’t want to climb right into that body?

Again, I gotta say, good work with the subtext, folks. There’s something about 50’s sci-fi that’s just inherently political beneath the dumb, low budget sheen. It’s the same reason I love horror so much. The genre is subversive and even cavalier with its messaging, and the metaphor at the center here is chilling. It takes the concept that men change after they’re married and ramps it up a couple dozen notches. Instead of stagnating in the loss of the thrill of the chase and taking the ol’ ball and chain for granted in favor of nachos and football, Marge’s man instantly becomes a cold, impassive block of marble that she can’t begin to understand or break through. I might even go so far as to call it an abuse allegory, though the movie certainly shies away from that interpretation.

I meant it when I compared it favorably to Rosemary’s Baby, though there is one big difference between the two movies (though admittedly Rosemary came out a flat decade later): I Married a Monster from Outer Space is boring as hell. As much as that subtext is extremely interesting, there’s not a single peg of plot to hold it up. Three things happen in this movie: Marge runs around hysterically, Bill gives brooding stares out the window, and aliens slowly take over random people’s bodies with superimposed black smoke. There’s no real conflict here, and when the aliens’ plan is finally revealed (SPOILERS: Their race is dying and they want to impregnate Earth women, but they also find themselves falling in love with them), it’s not exactly an evil plot to blow up the world or something.

The aliens are certainly bad, but they’re not really evil, and they fall like dominoes when the time comes, so they never really pose a credible threat. And maybe this is just me and the way the chips fell this month, but I’m a little tired of Body Snatching shenanigans. I get that it’s a cheap and clever way to circumvent your effects budget, but not every alien invasion has to involve human meat puppets. I’ll give this film a pass, because these scenes are very crucial to the central themes, but they’re dishwater dull and make a 77-minute feel seem like a slog. 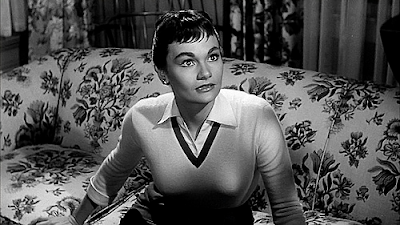 That’s quite an achievement, but unfortunately there’s no Oscar for that.

All that said, once the climactic battle kicks in, there are some pretty decent creepy effects shots of bodies melting into goo. And one or two moments were the smallest bit spine-chilling, so this is one of the only entries in the 50’s sci-fi canon to provoke any kind of tangible fear in me. And let us never discount the fact that Tom Tryon’s jawline makes any of his scenes completely bearable to watch, even if he seems incapable of rearranging his face into any emotion other than “stoic constipation.”

Really, it’s frustrating just how frequently the movie jumps from fun froth with bite to an implacably tedious snoozefest. Around every corner is something like this beautifully crafted 50’s time capsule dialogue from a father of newborn twins: “That Southern belle of mine is really ringing. I think she’s trying to build her own Confederate army.” But all of that is constantly undercut by scenes like Marge following Bill through the woods, which goes on for what feels like twenty minutes of the actors picking their way through that arid Santa Clarita landscape that all these movies try to convince us is a forest.

I can manage that cognitive dissonance enough to come around to liking the movie, but not so much that I actually recommend it. Just look up some Tom Tryon screenshots and call it a day.