If I Could Find You Now, Things Would Get Better 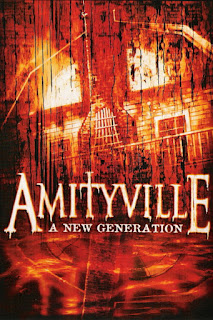 This deep into the series, two films from the end, it’s almost disappointing when a movie turns out to be decent. That would mean that this whole slog has been worthwhile, and I don’t know if I’m mentally sound enough to want to admit that. But alas, such is the case with 1993’s Amityville: A New Generation, hot on the heels of the also pretty OK Amityville 1992: It’s About Time.

To account for its success, I could point to the source material. A New Generation pulls yet another haunted object from the dusty, heavily fictionalized tome that was Amityville: The Evil Escapes (which provided the haunted clock to It’s About Time and the haunted floor lamp to Amityville 4: The Evil Escapes). It’s true that I’ve enjoyed all of these charmingly dumb films more than their miserable peers, but I’m loathe to give credit to such a lazy, exploitative piece of work.

Besides, all signs point to the influence of a titanic figure of retro horror who never gets the credit she deserves: casting director Annette Benson. An unsung heroine of the 1980’s, Benson is responsible for the casts of movies like A Nightmare on Elm Street, Night of the Comet, and Christine. She’s second only to Fern Champion in her run of hits, and yes of course I know about 80’s slasher casting directors, are you surprised? Now, I’m not saying she’s the only person responsible here, but there is a noticeable step up between this film and the previous one. The most recognizable cast member since Amityville sank into the direct-to-video swamp has been freaking Kim Coates, so it’s astonishing that she gathered even the small coterie of semi-recognizable faces she did here, seven films in. And that has made all – or at least a healthy portion of – the difference. 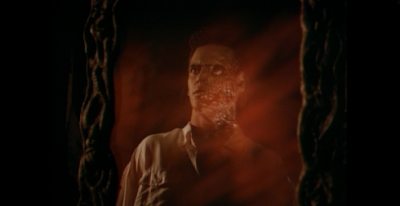 The haunted object coming down the pike this time is an ornate mirror, gifted by a mysterious hobo named Bronner (Jack Orend) to Keyes Terry (Ross Partridge, most recently spotted in Stranger Things as the Byers patriarch), a bohemian photographer with tragically 90’s sexyhair and a penchant for layering oversized button-downs. He lives in an impossibly enormous loft with his gainfully employed girlfriend Llanie (Lala Sloatman) and his painter roommate Suki (Julia Nickson), who falls in love with the antique and proudly displays it in her room.

Unfortunately, the mirror (which hung in the original Amityville house or whatever, OOOooooOOO) acts as a portal for vicious demonic forces, who introduce a chain of death and destruction into the lives of Keyes, Suki, Llanie, their landlord Dick (David Naughton of An American Werewolf in London), their sculptor friend Pauli (Richard Roundtree, AKA Shaft!), and local investigator Detective Clark (Terry O’Quinn of Lost and The Stepfather). The film also finds room for horror genre stalwart Lin Shaye, who always spices up whatever project she’s given. Score another point for Benson. 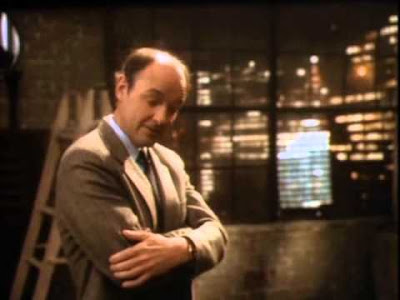 Swish! Nothing but Annette!

I really really liked Candyman 3: Day of the Dead. No, I didn’t lose my train of thought. I just want to remind you that I may be a crazy person before I tell you that Amityville: A New Generation is my second favorite movie in the franchise so far. Maybe I just have a weakness for 90’s DTV quickies with their weird high concepts and leftover 80’s cult actors, but there really is something here that wasn’t there before.

Aside from the unusually competent cast (I won’t say “overqualified,” because who really is shocked to see any of these names appear in a forgotten horror title?), A New Generation has a reasonably solid, coherent plot (Keyes finds that this mirror is a link to his buried past) that strings together a healthy set of pretty excellent scare gags, at least on the sliding scale of a beaten-down reviewer this far into a franchise marathon.

No Amityville film since the original trilogy has produced a sequence as compelling and visually bizarre as the moment where Suki’s mirror-inspired paintings of demons (attached to the wall via a series of swinging nooses) dance up and down, tear themselves apart, and launch her into an expressionistic tunnel of their own tattered remains. And that’s far from the only interesting idea at play here. I wouldn’t necessarily call anything in the film ‘scary,” but it’s definitely the product of someone exercising their creativity and not just submitting to the doldrums of the cookie cutter sequel format. 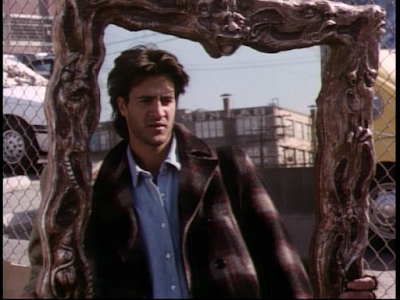 In short, it’s the Citizen Kane of Amityville movies.

Let me give you some insight into the process of how this movie got on my good side. Take the sexy/terrible hair and hilarious 90’s fashions of the cast of Friends, toss them with the pretentious aspirations and bohemian self-indulgence of the Rent crew, then drizzle on a heaping helping of paranormal antique mayhem, and you’ve got yourself a recipe for a fun-ass movie. Sure, it’s an off-brand version of all the things it reminds me of, but throw in some dimestore Suspiria music and Lin Shaye and we’re off to the races! So what if I’m an easy lay? I just want to have a good time.

Plus, A New Generation is pretty much the only Amityville film since the original trilogy to evoke the evil eye windows of the house in any meaningful way. In the decade since that glorious set was left behind, many films have tried to create their own interpretation of that iconic look (Amityville 1992: It’s About Time had a tract home that looked more like a squinting Milhouse than a glaring, angry façade), but this film harnesses its quasi-Elm Street nightmare sensibility to turn a pair of emergency doors into a striking, evocative silhouette. Also, you gotta love the world’s worst cop Terry O’Quinn, who waves off the violent ravings of a madman in favor of a juicy quip.

Do I recommend that you rush out and immediately rent Amityville: A New Generation from your local Blockbuster? Hell no! But this late in the season, it has been a real oasis of quality for me, and I feel newly refreshed in my approach toward Amityville Dollhouse and the looming finale to this godforsaken series.