In which we review two horror films directed by African-Americans covered on month 5 of Scream 101 season 2. The African prince Mamuwalde is turned into a bloodsucking monster by Dracula himself, and two centuries later he is released upon 1970’s Los Angeles to pursue the reincarnation of his lost love while a police medical official investigates the sudden spike in local murders.

Mixing Blaxploitation with 70’s horror wouldn’t necessarily seem like a recipe for success, unless you’re a cult film obsessive like Yours Truly. Well, it turns out the naysayers were wrong, because Blacula is kind of incredible. It won’t knock your socks off with pure terror, being as it is a low budget shocker from the pre-Exorcist era of 1972, but it’s – like – alarmingly good.

Sure, there is still plenty of high camp on offer here. I won’t pretend there isn’t. There’s a character named Skillet for crying out loud, but it’s all part of the fun. Blacula is one of those perfect time capsule films, as many low budget horror flicks tend to be. When you’re working on the cheap, filmmakers tend to have actors bring their own clothes and use real life locations that are readily available, and this peek through the lens into black culture of the early 70’s is remarkable. And there’s an ebullient performance of the song “There He is Again” by The Hues Corporation that I wouldn’t trade for the world.

But there’s a point about ten minutes in where everything changes. You’re basking in the stilted acting and the too-sweaty lead, expecting a minor fillip of 70’s camp detritus, but then that opening credits sequence hits, and you realize something monumentally important. Somebody out there really cared about making Blacula. This hand-drawn sequence is an utterly terrific stylized dance between a blood drop shaped like a woman and a staking bat flapping behind her. It’s perfectly, exhilaratingly James Bondian. This isn’t the kind of thing you commission for a tossed-off hack job.

And then the movie kicks into high gear, commenting on the black experience in a white-dominated society, where anyone black (or gay – although Blacula doesn’t treat them well, it’s inclusive enough to depict an interracial same-sex couple without much hemming and hawing) is pretty much already treated like a monster. Sure, it makes plenty of puns on the word “black” as well, but it has so much more on its mind.

Plus, though the gore is virtually nonexistent minus one gonzo final shot, Blacula’s design is a fun blend of old and new, shaping his afro into a classic vampire widow’s peak and giving him a bizarrely angular set of sideburns that provide him an uncanny, animalistic look.

Look, Blacula ain’t perfect. Its particular vintage will tell you that much, as will the disastrously tinny audio quality. But it’s been a long time since I’ve seen a horror film more than 40 years old that was so effortlessly engrossing and fun to watch, yet still retaining its brain and some sense of dignity.

Tales from the Hood (Listen to our episode right here.) 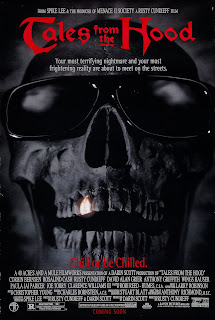 Three urban dealers attempt to pick up drugs from a sinister mortician who tells them four stories about how various corpses wound up dead.

Pretty much intrinsically, anthology films tend to be hit or miss. Often, they’re a collection of loosely linked short films strung together by a gossamer web of an interstitial plot. This is not so in the few masterpieces produced by the subgenre, which tend to have a single director and writer at the helm. This was the case with the George Romero-Stephen King project Creepshow, and I’m pleased as punch to confirm this is also the case with Tales from the Hood, which might just be my favorite anthology film I’ve ever seen.

Before we dig into the meat of each story, let’s look at the film as a whole, which – delightfully – Tales from the Hood actively invites us to do. The four stories are integrated with the main plot in such an organic way, it shakes off the lethargy of many anthologies, which dive mindlessly into story after story. Here, each tale feeds thematically (and eventually directly) into the development of the characters in the interstitial plot, to the point that it becomes a full, engaging story of its own.

The entire movie is a heavy-handed but delightful exploration of black social issues including police brutality and the vicious cycle of black-on-black violence (Spike Lee produced this film, surprise surprise), but in the process it also tells lever, engaging horror stories so it’s certainly the best of both worlds. And Clarence Williams III gives the Cryptkeeper a run for his money as the bombastically campy yet sinister horror host.

Let’ run through those segments real quick, shall we?

A Story that rings even truer today than in 1995, this tale of a black activist murdered by the police is a classic story of revenge served cold… as the grave. Following a powerfully brutal opening, this segment becomes an incredible effects showcase, including a clever design communing organic material with drug paraphernalia. It’s sleek, simple, and effective.

“Boys Do Get Bruised”

Probably the best segment of the entire film, this story hinges on a reveal that’s a little too obvious, but it’s a tale of suburban terror that calls to mind the best of Wes Craven, again leading up to a showstopping display of cartoonishly gruesome special effects.

Another story that pricks even more sharply today. An ex-KKK member is running for governor. This one fills in the requisite “evil doll” slot with another astonishing effects bonanza: this time an effortless integration of live action and stop motion.

Although this is by far the worst of the film’s four segments, it really put the film’s overarching themes through their paces. A flop sweat-fueled Clockwork Orange story about gang violence, it suffers from an extended, extremely annoying strobe effect during a key emotional scene and ends poorly, but at least it’s short.

These four segments combine into one dazzling whole, a politically-minded EC Comics throwback with real talent behind the wheel. The effects are, as I mentioned, spectacular, as is Christopher Young’s chameleonic score. Tales form the Hood is just plain fun, delivering a po-faced, often harrowing message with buoyant charm.