Well Princess, It Looks Like You Managed To Keep Me Here A While Longer 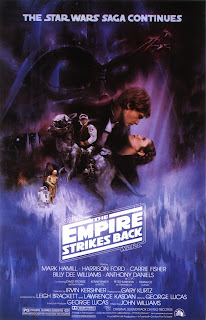 Our continued journey into the original Star Wars trilogy has immediately taken us from one of the most incalculably important blockbuster films of all time to the pinnacle of sequeldom: one of the few part 2’s that most cinephiles agree is an improvement on the original. Whether or not I subscribe to that belief will soon be revealed…

Not that it actually matters in the grand scheme of things.

The Empire Strikes Back (or Star Wars: Episode V, as the opening crawl would proudly and befuddlingly proclaim) gets right to the point, now that all the pesky mythmaking has been dispensed of in Star Wars (now retconned with the pointless subtitle Episode IV: A New Hope – Big Brother insists it has always been this way). We join our hero Luke Skywalker (Mark Hamill) at the Rebel stronghold on the ice planet Hoth. The Empire discovers their whereabouts and the forces flee after a battle that boldly insists that, where Star wars was a dazzling spectacle the likes of which you’d never seen before, this was turning things up to 11. 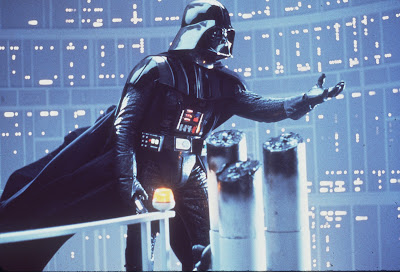 This is easily the shortest Star Wars plot summary I’ve ever written, and for good reason. There’s really not a hell of a lot of story here, as the film divides most of its time between the swashbuckling radio serial adventures of the Millennium Falcon crew and Luke’s spiritual journey in the swamp. Both of these halves are strong and have their own unique merits, but by the end they fail to cohere into something resembling a distinct storyline. The Empire Strikes Back is the interstitial link between the first and last entries in a trilogy, and it really feels like it.

But I’ve said it before and I’ll say it again. Star Wars movies just don’t have very solid plotting, so this is pretty much par for the course. The real sin in this narrative is committed on Princess Leia, who has had a spine-ectomy in the years between A New Hope and now, converting from a headstrong, silver-tongued firecracker to a cooing damsel in distress opposite Harrison Ford, with whom we’re begged to believe she has chemistry. It might be the result of the performances or just the profound chastity of the Star Wars universe, but the only sparks that are flying here are from Chewbacca repairing the warp drive. 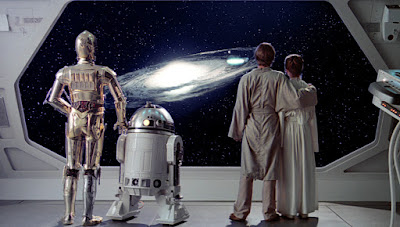 Sorry, guys. I’m sure you can find a nice, cheap pitchfork sharpener on Amazon.

But Star Wars has never been about story. It’s about a universe, and boy does Empire build on what is mostly implied by Star Wars. We explore the meaning of the Force more, yeah yeah whatever (the magic powers are cool, but I’m sick of ancient yogis trying to convince Luke not to use his awesome laser sword to slice the crap out of everything), but we also get to really stretch our limbs and see what majestic planets and mighty creatures it has to offer.

The sheer ambition of Empire is astonishing, but by pushing the envelope even further, it also opened itself up to more effects that didn’t quite age well. Honestly the proportion of stiff puppets of obvious rear projection shots is probably slightly higher than the relatively low budget original, but on that same token its successes are much more resounding. The cloud city of Bespen, the asteroid cluster, the swamps of Dagobah, and the chilly wasteland of Hoth are realized in grand Space Opera fashion.

And now that George Lucas has stepped down from his wobbly director’s chair, boy does the action sing. From the get-go there’s much more movement clarity and geographical precision in the flying battles: You can actually tell who’s in which ship, what exactly they’re doing, and what direction the lasers are firing (from which cannon), which is invaluable fuel to get your heart pumping. And when the film’s climactic light saber battle arrives, all caution is thrown to the wind. It’s a glorious sequence, a broadly expansive bit of light-show combat through the steam-filled underbelly of Bespen that is the single most visually striking scene in the entire trilogy, making expert use of color, light, and the camera in addition to its groundbreaking effects, something the films so frequently forget to do. 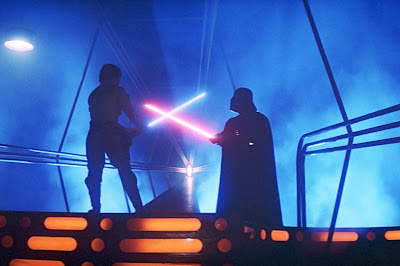 So, there you have it. The Empire Strikes Back polishes the gem that was Star Wars into a dazzling sparkle of adventure cinema. It builds on that already iconic universe (as does John Williams with his score, heaping even more bombastic themes into the mix) and bestows it with actual filmmaking skill in addition to fine technical craftsmanship.

Unfortunately, this comes at the expense of the already weak characters. They drift aimlessly though the beautifully environs of this movie, hardly even trying to glom onto a morsel of an arc or – heaven forbid – a sustained conflict. And Mark Hamill slips to the back of the acting pack with an explosive overreaction in an iconic moment. Don’t pretend you don’t know what I’m talking about. Luckily Yoda is a solid clean-up hitter, bringing an indelible Frank Oz energy that makes the Hamill scenes not only watchable but incredibly fun.

So, is Empire Strikes Back better than Star Wars? In many quadrants, it’s an unequivocal improvement. But in just as many, it doesn’t capture quite the same scrappy magic. For me personally, it’s still a toss-up, but a good one. Both are incredible works of blockbuster filmmaking that I’m grateful have brought so much joy to so many people around the world.