We Meet Again At Last 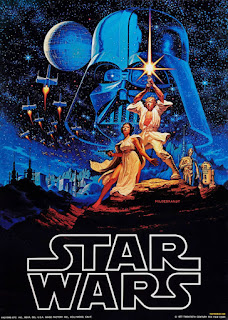 2016 was such a rough year for celebrity deaths that it was practically impossible to find the time to pay tribute to all of them. As I continue to spend January sifting through the wreckage of the year that was and creating a clean slate for a year that will require everything that I’ve got, here begins our belated, beloved tribute to the late, great Carrie Fisher. 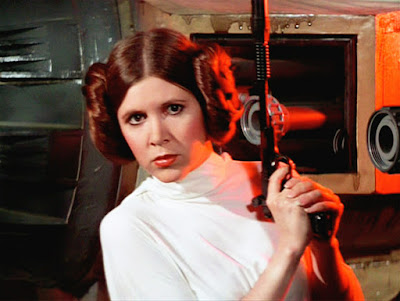 Plus, it’s probably a crime that I’ve written a movie blog for three years and haven’t covered the original Star Wars trilogy yet.

So, Star Wars. A long time ago in a galaxy far, far away and all that. Never have I felt more impotent as a reviewer, because first of all there’s no way anyone reading this needs to be persuaded as to whether or not to watch the movie. Second of all, even if you haven’t seen it, there’s almost no reason to include a plot summary because there may not be a person in the world who doesn’t at least know the broad strokes of the story. I’m watching these with a person who has never seen them before (a delicacy in this day and age) and a week ago he could have told you just as much about Luke Skywalker, Princess Leia, and their lineage as he can today. But format dictates a summary, so here we go.

The evil Empire is developing a planet-killing weapon for which Felicity Jones and other Rebel troops have obtained the secret plans. These have landed in the hands of one Princess Leia (Carrie Fisher, may she rest in peace), right before her ship comes under attack by imperial baddie Darth Vader (David Prowse with VO by James Earl Jones). She quickly hides the plans in the droid R2-D2 (Kenny Baker, may he also rest in peace) and bids him to use an escape pod to flee the ship with his partner C-3PO (Anthony Daniels). Thus they land on Tatooine (though, to my knowledge, the planet’s name isn’t given in the movie), where they are brought into the service of lonely farm boy Luke Skywalker (Mark Hamill).

The Empire’s search for the plans forces Luke out of his home and he teams up with his only hope, Obi Wan Kenobi (Alec Guinness, who must have owed somebody a favor) to get the plans to the planet Alderaan. To this end they hire smuggler pilot Han Solo (Harrison Ford) and his first mate, the furry Wookie Chewbacca (Peter Mayhew). They embark on a swashbuckling adventure to save the princess, deliver the plans, and take down the Empire’s Death Star once and for all. 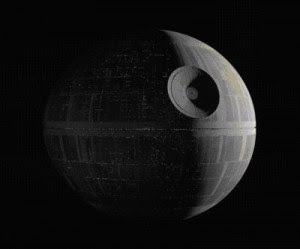 What’s most remarkable to me about Star Wars (please note that I’m reviewing the Despecialized Edition, as close to the original theatrical release as it’s possible to get) is how it’s simultaneously small-scale and the biggest thing imaginable. Writer-director George Lucas crams an entire universe of history, religion, and culture into a relatively simple story: a moody rural teen wants to get out into the world and go to space college, but instead he gets swept into some grand derring-do. I’m a little annoyed they name drop the Clone Wars, thus cementing them permanently into the canon, but the vast universe alluded to in the dialogue is a marvel of blockbuster world-building.

Which leads us directly into my second favorite thing about the Star Wars universe. This stuff looks old. We’re not living in a shiny, pristine Star Trek utopia. This all happened a long time ago, and all this “futuristic” technology was developed even longer ago than that. The props are battered and the sets are caked with sand and dirt, as if they’ve really existed for all this them. The implied history present in just the background of Star Wars is jaw-dropping. 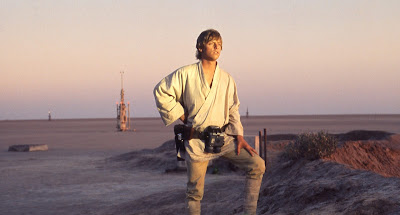 Though, whether or not I actually want to HEAR about that history in detail is another question entirely.

Yeah, I can’t say that the extended Star Wars universe is a thing of glory, but the implication of it provides for an epic, large scale cinematic experience that is entirely unassailable. And what an experience Star Wars is! It’s one of the films that ushered in the modern blockbuster era, and there’s not a shred of doubt why. It’s perhaps the most groundbreaking work of special effects magic ever conceived. Obviously, considering it was released in 1977, some effects haven’t aged well (like the dime store werewolf chatting with the criminal element of the Mos Eisley Cantina), but the true marvel is in just how much hasn't aged.

Star Wars’ ability to get you to accept the tactile reality of space is damn uncanny. Watching the final Death Star battle, you find yourself questioning absolutely nothing, a remarkable achievement of model work that is still unparalleled. Sure the computer readouts are 70’s monochrome displays, but the TIE fighters rushing through a dizzy starscape are timeless.

The effects breathe life into the film, as exemplified by one of my favorite characters: R2-D2. The fact that it’s even possible to craft a loveable figure who can only communicate through beeps and a flashing light is in itself a testament to the filmmaking prowess at work here. Through dialogue, Kenny Baker’s impeccable physical performance, and the work of the effects team that allows the unit to move freely, it’s almost frighteningly easy to be convinced that this is an actual robot with its own autonomy.

And f**king John Williams, man. The fact that he threw his all into this ludicrous sci-fi project about a walking carpet fighting a giant space ball that shoots lasers changed everything. Although his best compositions are yet to come (his iconic imperial march doesn’t debut until the next one, believe it or not), the lush, instantly iconic orchestral score lends Star Wars a gravity that buffers it against criticism that it shouldn’t be considered a legitimate entry into the pantheon of cinema art.

There are VERY few orchestral compositions that can provoke audiences of all ages to spontaneously applaud.

But Brennan, what of those characters that populate this despicably well-realized world? What of that intricate Star Wars plotting? I’m about to drop a harsh truth on you guys. Star Wars movies almost never have good plots. Here Luke is bustled through a fairly basic adventure narrative that’s easy enough to follow, but there’s so much spectacle, his arc from farm boy to Rebel hero is shoved into the shadows. He’s an archetype and so are his friends, so the film never really feels the need to bother with them.

The acting is likewise exactly what it needs to be. Although the costume performers Mayhew, Daniels, Baker, and even Earl Jones to an extent must and do give nuanced performances that lend credibility to very physical roles, nobody human is giving a truly great performance, with the exception of maybe Alec Guinness. But that’s not what Star Wars is about. The sheer craft on display here is utterly indispensible, and although I don’t consider myself in the thrall of the magnetic pull the franchise has on movie fanboys, there’s no denying that the original Star Wars is a work of mad creative genius.

However, George Lucas the director is far less sure of himself than George Lucas the showman. He very publicly couldn’t give a crap about the people onscreen, but the light saber battle that caps off the second act of this film is a bit stilted, edited in a shapeless jumble. The only things that carry that nigh-on incomprehensible scene are the stellar effects and the sound design. It’s Star Wars in a microcosm, riddled with filmic flaws but compensated for mightily by pure movie magic.