I Do Believe They Think I Am Some Sort Of God 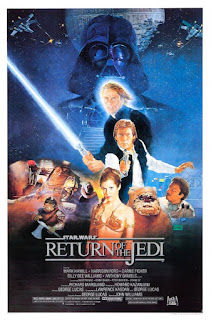 Capping off a trilogy is a tricky thing. Indiana Jones did it right, redefining the dynamic by roping in Sean Connery as Indy’s father. But so often a trilogy can descend into silly spectacle like Scream 3 or fade into relative anonymity like The Godfather: Part III. And how does one expect to follow two pristine entries like Star Wars and The Empire Strikes Back? It’s a challenging proposition, so I don’t blame George Lucas & Co. for not really trying. 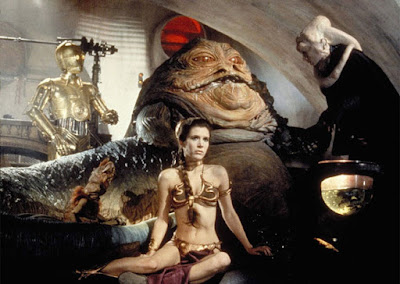 Ya burnt! Let’s get into my justification before the people with pitchforks find out where I live.

For the first time in the trilogy, things pick up more or less where they left off. Han Solo (Harrison Ford) is still frozen in carbonite, providing the sluglike crime boss Jabba the Hutt’s (Larry Ward) walls with quite the conversation piece. Leia (Carrie Fisher) is still in love with him for no discernible reason. And Luke (Mark Hamill) is still a whiny spacebaby, only now he styles himself as a Jedi Knight, despite never actually having finished his training with the ailing Yoda (Frank Oz). They rescue Han from Jabba’s wretched hive of scum and villainy, and rejoin the Rebellion to aid their mission to stop the Empire from completing work on a brand new Death Star.

Luke’s true test of becoming a Jedi master begins here: will he succumb to his hate and anger and become a pawn of Darth Vader (David Prowse body, James Earl Jones VO) and the wicked Emperor (Ian McDiarmid)? Or will he find the light and hope and crap that will guide him to the right side of the Force? A battle ensues on and in orbit of the forest moon of Endor, with Han, Leia, Chewbacca (Peter Mayhew), R2-D2 (Kenny Baker) and C-3PO (Anthony Daniels) fighting alongside a native tribe of teddy bears called Ewoks (Warwick Davis and a bunch of other people) to shut down the shield surrounding the star and Lando Calrissian (Billy Dee Williams) leading the space battle above, because I guess he was the only named character they had left and Obi Wan’s ghost (Alec Guinness) wasn’t gonna do it, as much as his death entirely fails to hamper his presence in the material world.

In another life, George Lucas probably would have been a ghost hunter.

Return of the Jedi has been the subject of much fan derision over the years. “The Ewoks are stupid! It’s just another Death Star!” I have an equally low opinion of the film, but for almost entirely different reasons. Although I agree that the Ewoks are poorly executed with their stiff, unmoving plastic surgery lips, their presence grants us a reprieve from the biggest weakness of Jedi: the human characters.

Luke, Leia, and Han Solo have never had particularly interesting arcs, because they’ve never really been asked to. But all of a sudden, it’s the end of a trilogy. Some kind of arc needs to be fulfilled, so the trio is tossed into a character development blender set to warp speed. Luke especially gets hit full in the face with his so-called emotional journey, squashed into the “inner conflict between light and dark” storyline implied by Empire. His endless, tedious exchanges with Darth Vader and the Emperor would be interesting if we had any insight into his character or the struggles this script pretends he has, but it’s just a mountain of New Age Forcebabble with completely incomprehensible stakes.

Return of the Jedi also lurches from a major gearshift tonally. Where Luke’s half of the story grows more needlessly serious and introspective, the rest of the film descends into the lunatic chaos of a cartoon. Yes, the Ewoks are a symptom of this, but they’re by a wide margin less irritating than Jabba the Hutt’s cabal of snickering evil puppets, which look like rejected goblins from Labyrinth. Or the dastardly calliope score. Or the hyperbolic screams every unnamed character seems to give whenever they’re knocked over. 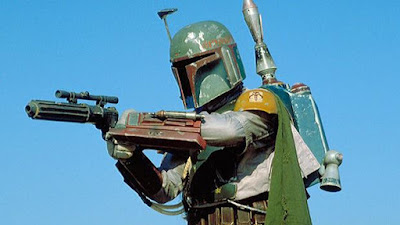 But I kind of loved those screams, so I won’t dwell on that.

It’s taken me about a week to crank this review out, because I just can’t find it in my heart to give a crap about Return of the Jedi. It’s a thin endcap to a massive franchise, and that’s fine. It does enough to not stomp all over the massive legacy of Star Wars, both as a special effects spectacle (the land speeder chase on Endor is beyond reproach, even if it has some shaky rear projection) and as a blockbuster titan (They may not be up to much this time around, but there mere presence of the returning characters is magnetic enough to overcome that; and John Williams is mostly coasting on old compositions, but what compositions they are!) but it’s really just not that good.

I hate to say it, but it’s true. Return of the Jedi is all over the place, shoving characters into and out of its lopsided narrative at random (poor Boba Fett – I’ve never understood exactly why the bounty hunter who appears in five minutes of Empire is so darn-tootin’ popular, but he deserves better than the Three Stooges demise he’s handed here), lurching through a truncated repeat of the Death Star plot, and ladling a heavy second helping of family lineage intrigue that drowns continuity. It’s still Star Wars, so it’s at least an engaging popcorn space adventure, but Return of the Jedi was the first time the series showed signs that not every entry in the canon was going to be an out-and-out masterpiece.