Popcorn Kernels: Even The Wind Is Afraid

In which we review the final two Mexican horror films screened during month 4 of the Scream 101 podcast: a classic 60’s horror film and its New Millennium remake. 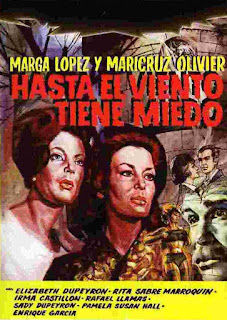 
The students at an all-girls school are haunted by the ghost of a past student who committed suicide.

Hasta el Viento Teine Miedo faces two hurdles right off the bat. First, it’s a 60’s horror movie. Second, it’s a classical haunted house film. Both of those genres tend to be too stately and antiseptic to provoke blood-curdling chills in today’s audiences. However, the film’s antidote to this is writer-director Carlos Enrique Taboada, who is as close to a Dario Argento as classic Mexican cinema would get.

Although Hasta el Viento still lacks powerful scares, it does boast a sense of creeping dread provoked by an extremely powerful and well-crafted aesthetic. Its use of light and shadow is a perfect stepping stone between German expressionism in the silent era and the stylistic rush of 70’s giallo filmmaking in Italy. The plot might be straightforward and predictable (even at the time), but it lives in a lush, exciting world. This profound grip on style arrives fully fledged in the very first shot, which shows the feet of a hanging body in the top of the frame before revealing its full silhouette on the wall in a flash of lightning. It both skirts the heavy censorship of the period and creates a more dreamlike, provocative image out of a vision that could have merely been crass and blunt.

This delightful handle over the style spreads to every aspect of Hasta el Viento, including the score, which soars up and down in a blustery refrain, and the framing that turns the mundane into an eerie fantasia. It shows a consistency of vision that allows it to transcend from being a horror flick to being an actual bona fide work of cinema art.

Then the characters that occupy that bare bones plot are just delightful. And I’m not just talking about their gravity-defying go-go hairstyles. Each girl has a distinct personality and set of motivations, and their interactions ring with truth, simultaneously sparkling with naturalistic humor. Their dialogue is what makes the movie, buoying the down moments.

I wouldn’t advise going into Hasta el Viento expecting anything other than a stately foreign film, but it delivers its atmosphere with an engaging, surprisingly modern flair. Another Mexican horror film about the terrors of institutional oppression, it’s both a political and stylistic triumph, even if it really isn’t scary anymore. 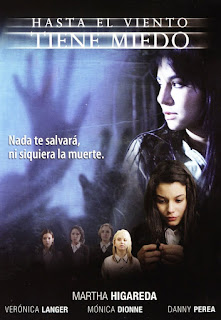 
After a suicide attempt, Claudia is sent to a home for troubled teens that is haunted by the vengeful spirit of a past patient.

It turns out Hollywood isn’t he only place where we can make a hash out of a classic foreign film with a ham-handed remake. Those foreign countries are perfectly capable of doing it to themselves. By updating the classical ghost story of Hasta el Viento Tiene Miedo to the modern age, they drown it in detail and sleaze, stripping away every last element that made it an enduring horror tale.

They’ve given Claudia a gritty origin story, updated the setting to be more grim, and tossed in about half a dozen superfluous lesbian subplots, all in a desperate attempt to jazz it up and appeal to a jaded modern audience: More blood! More boobs! An unnecessary backstory for the tower where the action takes place! It’s an unholy mess, and proof positive that more story detail does not equal a better movie.

I will admit that the story here is more coherent and structured than the original, which had an elemental, almost campfire-esque quality. But the plot will always be simplistic, no matter how much you accessorize it. What made the film click was its inimitable style and engaging characters, two things that the remake entirely lacks. In the habit of most 2000’s remakes, the characters are reduced to interchangeable assholes in the name of “edginess,” and the aesthetic is crude at best, eliminating all mood and shadow with wide blasts of light that make the whole thing look like a forgotten TV movie.

At least this movie attempts to add one element that could be interpreted as intelligent. A major visual and narrative motif is menstruation, as the blood is linked to the characters’ fears of aging, sexuality, and life itself. Naturally, it’s too dumb to do anything particularly exciting with this development, but at least it’s trying. I guess.

However, beyond that, Hasta el Viento 2007 has nothing to offer. Having removed all the best qualities of the original, it’s trapped with that dud story and is left as a miserably tedious slog. I always do my beast to give any remake a shot, but like all too many entries in the genre, this one is just a wailing waste of time.