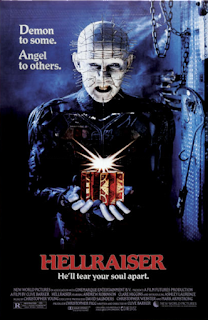 Of the horror franchises birthed in the back half of the 80’s, most withered and died on the vine (The Stepfather, Pumpkinhead, etc.. Very few survived into the modern era save the likes of Child’s Play (which got 5 increasingly batty sequels) and Puppetmaster (which people have long since stopped paying attention to, though it has propagated some 10 sequels). One of the more prevalent of these (in terms of size and cultural prominence) is the Hellraiser franchise, which sits at a robust eight sequels with Hellraiser 10 on the way.

I’m hardly able to begin yet another marathon at the moment, but consider this a prologue to an inevitable retrospective of the delirious B-list franchise that exists solely because of a staunchly A-list villain. So let’s introduce ourselves to that genre icon right now. Ladies and gentlemen: Please welcome… Lead Cenobite! 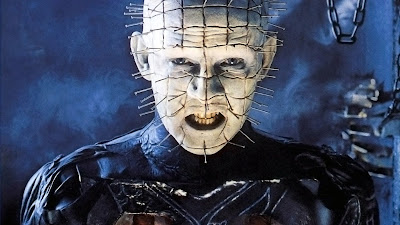 In Hellraiser, Frank (Sean Chapman) purchases a mystical puzzle box that, when opened, will take him to a dimension of unbearable pain and unbelievable pleasure (did I mention that Clive Barker is basically the crown prince of S&M?). He does this in the attic of his ancestral home in England (no, I don’t know what that means either), and shortly afterward his brother Larry (Andrew Robinson) moves in with his wife Julia (Clare Higgins).

Julia, who had been party to an extremely sordid affair with said Frank, is disgusted when he emerges from the attic floor as a skinless goo monster. But a good lay is hard to find, and she gets sucked into his sinister plot to murder unsuspecting men, using their blood to give him a corporeal form before the Cenobites – the monstrous demons who rule the S&M dimension led by the monster known colloquially as Pinhead (Doug Bradley) – find out that he has escaped. Bu will she draw the line at murdering her husband? 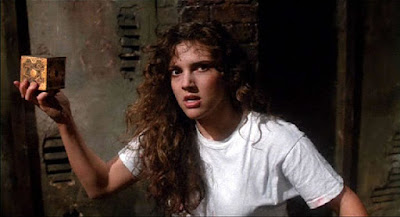 Also, Larry’s teen daughter Kirsty (Ashley Laurence) is there, because god damn it, this is 1987 after all.

We’re dealing with a 1987 movie that features at least five murders, a spunky teen survivor chick, and an iconic horror franchise villain, so you may wonder to yourself why Hellraiser isn’t an entry in my Census Bloodbath slasher feature. The answer is quite simple: Clive F**king Barker. The man behind Nightbreed couldn’t possibly stop to such a human level, following a formula that dictates anything like plot, character, or normalcy. He carves his own path, and he carves it in his skin with the dull end of a butter knife.

Much like Nightbreed, Hellraiser isn’t so much a story as it is a collection of disturbing images and situations that only cohere into a satisfying whole when you step back and unfocus your eyes. It’s a much more structured piece than Nightbreed, which was already baffling before it was savaged by producers, but it still operates on a level of pure, gut-wrenching horror rather than constructing a traditional narrative. 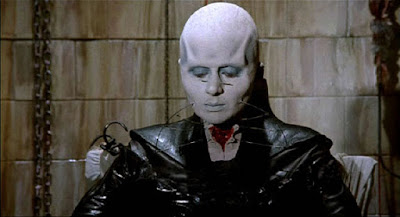 You mean the guy who invented this chick isn’t traditional? What a shock.

It might not be totally comprehensible at first bite, but Barker is above all else an artiste, and his brutally beautiful imagery is enough to sustain Hellraiser in its monstrous entirety. In fact, if it weren’t for the web of mythology he spins around his Cenobites, you could strip every last line of dialogue out of the film and still fundamentally grasp exactly what’s going on, which is a hallmark of pure cinema. Barker constructs his frames with utmost precision. Utilizing every element at his disposal to rub your nose in a tone or a feeling.

Whether it’s the cramped bed that signals an uncomfortable marriage, the expert juxtaposition between an adulterous flashback and a mattress-moving mishap, or the hellish splashes of light over a bloody love affair, Hellraiser is a sickly erotic masterwork Barker’s stunning imagery is bolstered by dripping, ghastly effects from Cliff Wallace that hold up marvelously well. Frank’s grotesque, malformed stages of resurrection are perpetually stunning work and the Cenobite design is sublime. The only shoddy work in the whole piece is a bizarre dragon monster that feels like a Harryhausen reject, but the scene in which it appears already reeks of rushed reshoots, so it can be forgiven for not living up to the proper standard.

Hellraiser is birthed from a feverishly creative intelligence on all sides of the board. It’s a rubber reality showcase of the best effects the 80’s had to offer, supporting one of horror fiction’s sickest, most original minds. It may read more like a gallery piece than a traditional narrative, but horror has the ability to transcend formula. As long as it can knock the break out of you, it has done its job. And Hellraiser does that and then some in its own inexplicable, screeching, blunt manner. This is some of the best of what horror has to offer (if you don’t mind a bit of camp acting): a glimpse into a world that looks like our won and yet is something wholly, nightmarishly different.

TL;DR: Hellraiser is a visceral, tonal masterpiece that doesn't bother itself too much with a plot.
Rating: 8/10
Word Count: 900
Also sprach Brennan at 8:15 AM