For our Scream 101 episode about this very film, click here. 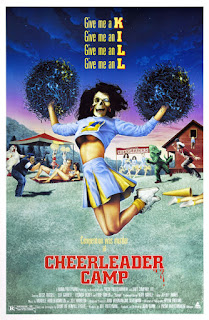 After intense examination, I have concluded that the period between about 1986 and 1988 is when the cheesiest, most vomitously unfashionable concentration of campiness hit the slasher genre. Unfortunately, right around this period is when the subgenre was in its most severe decline. The glut of slashers had been flooding the market since 1980, only increasing in strength following the home video boom of the mid-80’s. Of course, when a high pressure perm front meets a low pressure quality snap, you get a maelstrom of memorable bad-good delights.

Take Cheerleader Camp. A woods-based slasher flick that was exactly too late to meet its prime market, it’s still a memorably entertaining crapfest. Co-produced, by – of all companies – the Japanese Daiei Films (progenitors of the Gamera franchise), Cheerleader Camp is deliriously out of touch with anything resembling reality. 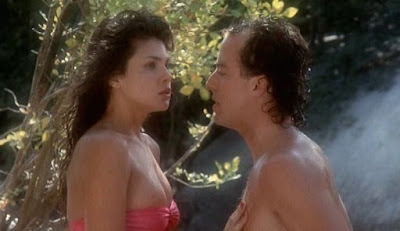 Starting with the campers’ ages, which bottom out at about, oh, 32.

Camp Hurrah. Where dreams come true. Where men can be men and women can be topless. The particular cheerleading group we will be following is from Lindo Valley, composed of the cooing nymphette Pam (Teri Weigel, who you might recognize from Lesbian Babysitters 5), the blonde bubblehead Bonnie (Lorie Griffin), the Ethnic One Theresa (Rebecca Ferratti), the requisite fat prankster Timmy (Travis McKenna), the sweet, doting mascot Cory (Lucinda Dickey), the lascivious team captain with a gravity-defying hairline Brent (Leif Garrett), and his girlfriend Alison (Betsy Russell, who would later marry another onscreen psycho – Jigsaw. She appeared as his wife Jill in Saw IV-VII). Alison has been plagued by bad dreams, because you saw how much money that Freddy movie made, right?

When people who defy Alison start dying under mysterious circumstances, Alison worries that not all might be right in her mind. Is she killing these people? Or is it somebody else? The snobby camp owner Deedee Tipton (Vickie Benson)? Pop (Buck Flower of Maniac Cop, Pumpkinhead, and a million other things), the leering handyman with the Southern drawl who feels transplanted from some other movie entirely? When the killer turns their sights on the Lindo Valley team, their cheerleading getaway quickly becomes a bloody fiasco. 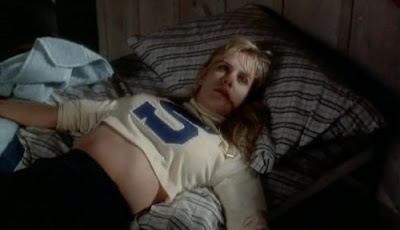 They did NOT stick the landing.

You’d think from that setup that Cheerleader Camp would be more or less a boob showcase, highlighting the best and bustiest of today’s youth. But take a look at that calendar, sucker. This is 1988, and the MPAA had long since choked out the genre’s capacity for sleaze like a pernicious weed. Although there IS a highly amusing sequence that could only be classified as a Bikini Removal contest, this is largely an exploitation-free zone. Shirts are practically super glued on, and the gore is shooed offscreen (though, in the few kills that do have blood, the effects are shockingly solid).

What Cheerleader Camp does have in spades to make up for its deficiencies is pure, unadulterated lunacy. Three characters in particular have tapped into a rich vein of incredulity. While Alison, Brent, and Pam stumble their way through a musty, run-of-the-mill slasher pic, Timmy, Miss Tipton, and pop the handyman are quietly constructing a Looney Tunes cartoon on the sidelines.

While Timmy spies on bathing women using a periscope and decked out in full Mrs. Doubtfire regalia, Miss Tipton (who could totally be played by Judy Greer in the remake) gets blasted on cocktails and has nudity-free cheerleading themed sex with the local sheriff. You’d think that description would be enough to sufficiently explain the nature of that scene, but you would be dead wrong. Deedee Tipton is a shining paragon of inexplicable slasher sexuality, and this convoluted, needlessly detailed scene is so crazy go nuts that it’s worth the price of admission alone. I mean, you can catch Cheerleader Camp for free on YouTube, but it’s such a sterling scene it’s legitimately worth paying actual human money for.

And then there’s Pop. Actor Buck Flower knows exactly where this movie stands in the pantheon of cinema (he was in Back to the Future and Escape from New York, so I’m pretty sure he knows that Cheerleader Camp is not his career peak), so he goes hog wild, ad-libbing all his lines and not giving half a hoot if his character makes sense. He is an endless repository of folksy, down-South sayings and lecherous, sweaty hyperbole that will stun your mind into submission. He’s the only genuinely good actor here, and his screen presence is like a giant electromagnet. 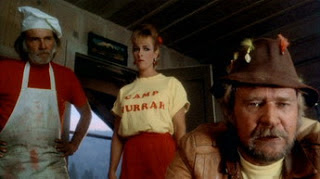 While most of Cheerleader Camp’s fun falls into the unintentional bad-good category, there is a primitive but surprisingly effective sense of humor at work here. A scene of the mascots attempting to eat lunch while still in costume is as funny and well-shot as any contemporaneous ten comedy. And there are a handful of clever cuts that provide punchlines through the film’s editing itself, which is a level of comedic foresight almost unknown in the genre.

So as much as I want to hate Cheerleader Camp for its plot (which is as dense as a sponge, skipping through a loosely linked series of vignettes) its dreadful third act (which hinges on a red herring the screenwriter couldn’t be bothered to call out attention to and is basically a perpetual motion machine of teens running through underlit woods), or its total lack of scares (save for two nightmare scenes which are appropriately surreal), Cheerleader Camp is still a bucket of bloody fun. It’s not as recommendable a bad movie as, say, Killer Party, but it certainly has more focused, solid material than a Girls Nite Out. Don’t rush out to see it, but if you stumble across Cheerleader Camp in a dusty bargain bin, at least give it a second thought. 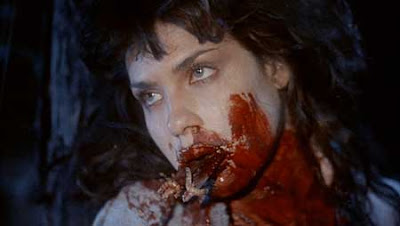 Sign of the Times: Every time the camera cuts back to Theresa, her hair is teased about a foot taller.
Scariest Moment: In a nightmare, Alison’s pom poms slice her arms open like razors.
Weirdest Moment: While being chased through the woods, Timmy decides to take a break to film a monologue – and then decides to take a piss, all while still filming.
Champion Dialogue: “That judge in the orange skirt… Make yer peepee harder than a ten pound bag of nickel jawbreakers.”
Body Count: 9; 7 perpetrated by the killer, 1 by a gaggle of scared cheerleaders, and the last by the Final Girl herself.


TL;DR: Cheerleader Camp is a weak, late entry in the slasher genre, but it's silly enough to be diverting.
Rating: 6/10
Word Count: 1197
Also sprach Brennan at 9:44 AM