Today is a very special day in the lives of Sergio and I. Tonight we are attending the Fireworks Finale at the Hollywood Bowl celebrating the 25th Anniversary of The Simpsons, a show which he has held a lifelong adoration for and that I have been working exclusively with for the past few months.

When watching The Simpsons is your job (I'm super cool, I know), it's easy to view the task as a daunting and tedious affair, especially after a commute about the size of four episodes. But the show is an enduring zeitgeist hit for a reason and it's hard for me and my coworkers not to be giggling at our desks. For that reason, and in honor of the show tonight, I'd like to dedicate today's post to the show that has defined the last quarter of the century.

And now that I'm far more knowledgable about the inner workings of The Simpsons than I ever dreamed or hoped I would be, I'd like to put that knowledge to the test with

Sure, everybody knows Milhouse and Krusty the Clown. You don't even need to watch the show to know those characters - they've become part of the lexicon. But the Simpsonverse is brimming with exciting characters that have appeared many times throughout the show's 25 year run, but don't get quite as much credit for it as characters like Ned Flanders, Nelson Muntz, or Apu Nahasapeemapetilon. Let's take a moment to celebrate these stoic individuals. 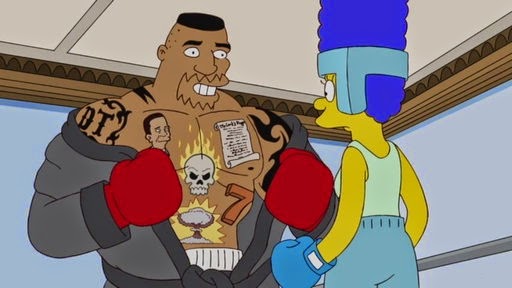 Voiced By: Hank Azaria
Appearances: 23
Quote: "Hello, yeah, how you doin', I'd like to order two gazelles, an impala, and throw in a couple wildebeests. Oh, and a two-liter bottle of diet cherry cola. You just have one-liter bottles? Okay, cancel the whole order."

Drederick Tatum is Springfield's answer to Mike Tyson, a professional boxer and hardened criminal to boot. But Drederick has so much intimidating power, he never feels the need to use it, instead preferring to live his elegant lifestyle and/or eat Jello in peace while others bend over backwards to stay out of his way. His delicate whisper of a voice and his erudite manner of speech, combined with his brutal skill in the ring make Drederick a fascinating character. So much so that he appears on this list despite appearing in far fewer episodes than anybody else. 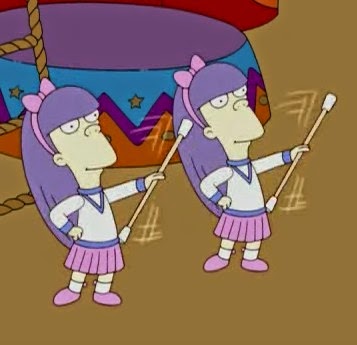 Voiced By: Russi Taylor
Appearances: 42
Quote: "Remember. The one you pick may not be the one you get."

Sherri and Terri are generally just used as background characters to populate the school scenes, but they have much more personality than their peers, like Richard or Database or Lewis. Are you saying "Who?" Exactly. A lot of my favorite humor comes from the duality of these two characters as they either interact as one being or exhibit creepy twin characteristics. I suppose its easy to see why considering my pedigree as a horror fan, but I'm always drawn to the sinister, dark, and creepy side of Simpsons humor. Of which, luckily, there's an abundance. 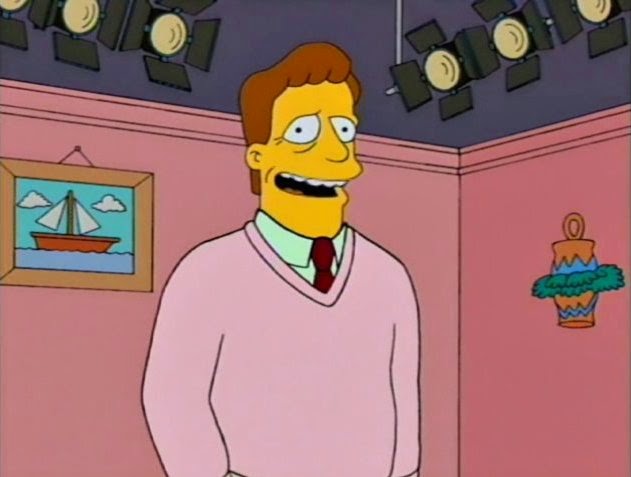 Voiced By: Phil Hartman
Appearances: 32
Quote: "Hello, Selma Bouvier? It's Troy McClure. You may remember me from such dates as last night's dinner..."

Troy McClure is a parody of the industry, an eternally washed-up actor who appears in instructional videos largely to remind people that he, as a matter of fact, did have a thriving career once and hey, wouldn't they like to buy a DVD or two? Of all of Phil Hartman's desperate, money-grubbing roles (including derelict lawyer Lionel Hutz), Troy McClure is the funniest, hiding his flop sweat beneath a deep voice and a handsome face. 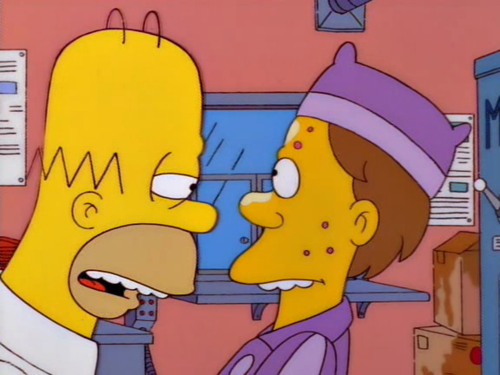 The Squeaky-Voiced Teen has never been given a name, but he is a fixture in the Springfield community, having worked just about every crappy customer service job imaginable. You may wish that you, like the Simpsons, never aged beyond your current state, but one of the hazards of eternal youth is that you have 25 years of summer jobs to get through. Squeaky-Voiced Teen is a weak spirit, constantly pushed around in jobs that he has no passion for, and only The Simpsons can render that kind of dynamic completely hilarious. But believe me it is. 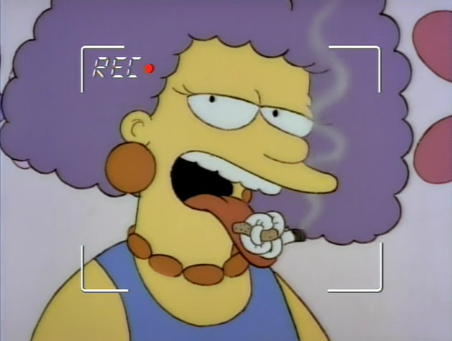 Voiced By: Julie Kavner
Appearances: 111
Quote: "Always a bridesmaid, only occasionally a bride."

Although Patty is her identical twin, Selma is by far my favorite of Marge's sisters. Fearless and grumpy, Selma charges her way through any given situation with chutzpah and bitter sarcasm. Although she could do to treat Homer a little nicer, her one-liners can't be beat. And her tough as nails attitude is what won over her sixth and final husband, the illustrious mafioso Fat Tony. Although it didn't work out (does it ever?), Selma Bouvier-Terwilliger-Hutz-McClure-Discothèque-Simpson-D'Amico continues to face the world as she always does - with gruff disgust. 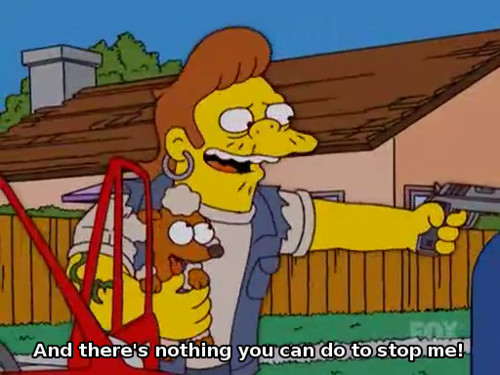 Voiced By: Hank Azaria
Appearances: 63
Quote: "I am so going to enjoy pooping on their carpet."

Snake is just about the only criminal in town, so why is he so likable? With his valley girl accent, his unique, almost coworker-like relationship with captor Chief Wiggum and victim Apu, and his general agreeableness make him unique in the felon community. Also his hair is superb. 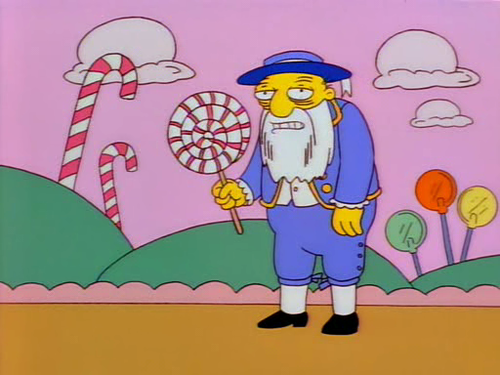 Voiced By: Harry Shearer
Appearances: 41
Quote: "All I brought is a dime. I didn't know there'd be pornography."

Jasper is Grampa's gruff best friend, and a constant acerbic presence in the community. His humor derives from his deadpan deliveries and unimpressed personality. But when he tries, Jasper can be really sweet, like when he brings Grampa along on a trip to Capital City so he won't be lonely. The Springfield Retirement Castle wouldn't be the same without him. 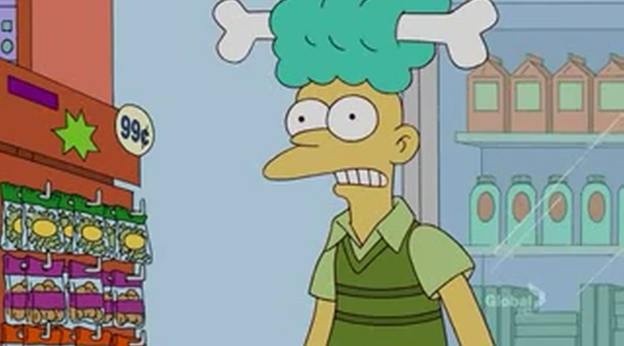 Voiced By: Dan Castellaneta
Appearances: 116
Quote: "Applause is an addiction. Like heroin. Or checking your email."

Everybody's favorite non sequitur character would probably be Ralph, the weird little son of Chief Wiggum, but I myself am rather partial to Krusty's sidekick Sideshow Mel. A wacky quasi-caveman who speaks like a Shakespearean actor, Mel is typically the first member of any crowd to react to the antics of the Simpsons, always in an erudite manner, but with a layer of absurdity as large as his hair. 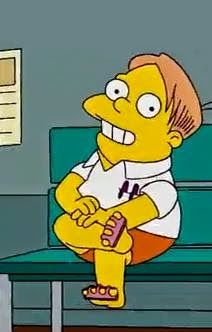 
Martin's a huge nerd, an endlessly amiable classmate, and a coded homosexual in the vein of Arrestd Development's Tobias Fünke. His boundless enthusiasm for life and knowledge is infectious and he is prone to outbursts of intellectual fervor that get him on the bad side of the local bullies more often then not. But this little charmer is never going to stop and that's why I love him. He's impenetrably warmhearted and though he may only have one line in any given episode, it's always sure to be a corker. 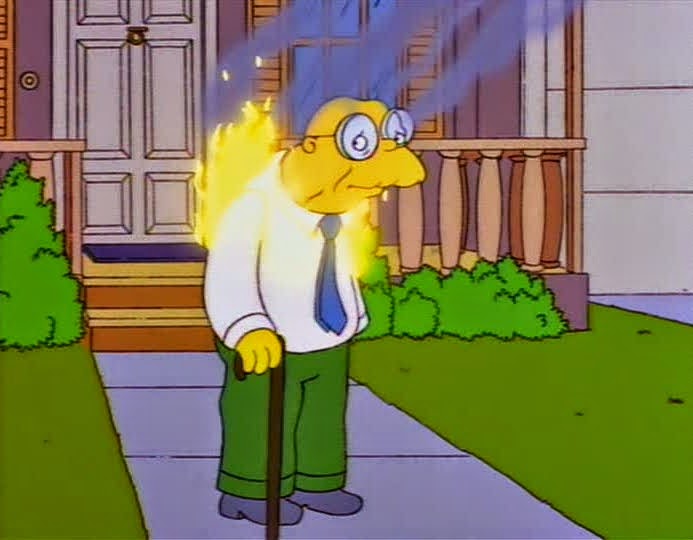 Hans Moleman is the one character that consistently keeps me rolling in the aisles. A withered old man with a weak temperament, Moleman always finds himself in sticky situations, whether it be a car crash, a bad date, or not being extroverted enough to mention that he is still alive at his own funeral. He accepts the weight of the world with a sigh as life constantly provides him with new challenges. His begrudging acceptance of the state of things as terrible as they are is a constant crackup. Characters that have terrible things happen to them are a staple of the genre (Oh no, Mr. Bill!), but hands down Moleman is one of the classics of the form, and an alarmingly underappreciated one at that.


So what do y'all think? Are you happy I mentioned a favorite? Sad I skipped someone? Please let me know in the comments!  And have a nice day! I know I will.
Word Count: 1379
Also sprach Brennan at 10:30 AM