Man, Sergio and I are just plowing through the filmography of Pedro Almodóvar Here are two mini-reviews of flicks starring a psychotic Antonio Banderas. Check it out. 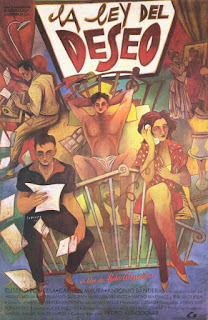 A promiscuous gay film director brings home the wrong fan: A jealous, psycho who will stop at nothing to make sure he’s his ONLY lover.

Pedro Almodóvar is a genius. A colorful, frenetic, dazzling presence behind the camera. An overwhelming personality that radiates love and fun even if you’re not enjoying a particular movie all that much. The way Almodóvar crosses and transcends genre boundaries, it was inevitable that I would stumble across one that doesn’t hit my sweet spot, though that doesn’t mean it’s not a work of art. The film in question is Law of Desire, which grafts the director’s loopy, nebulous storytelling style onto a thriller framework. It can’t be argued that the result isn’t visually spectacular, but the presence of such a tautly defined genre casts the director’s storytelling idiosyncrasies under a harsh spotlight.

To be fair, everything I love about Almodóvar is here in spades: His surreal interstitials (like a gorgeous shot of cocaine falling over a movie script like snow), his effortlessly kinky sexual deviancy, and most of all his intricately woven thread of unshakeable humor. The comedy is not so prevalent as Volver or Mujeres (the latter of which is an out-and-out farce), but it’s no less electric. Humor is mostly relegated to supporting players Carmen Maura (an Almodóvar stalwart from Day 1) and Manuela Velasco (star of my beloved [REC], who is very young in this film but no less talented) leaving Banderas and top-biller Eusebio Poncela to make do with a heap of straight drama (and by that I certainly don’t mean “heterosexual”) that doesn’t mesh as well with the cozy, silly aesthetic as it could have.

There are still some tremendously solid components to this part of the film, notably the subtext about a filmmaker who wants to direct his own life but finds out that life has different plans. But this is largely derailed by a goody third act amnesia plot point that’s perhaps even more frivolous than the similar moment in The Muppets Take Manhattan (yeah, that movie got dark).

It’s an undeniable achievement in filmmaking (remembering the driving scene that matches a car with the lead’s flaring emotions still sends a chill down my spine,), but the story is just to weak to hold up the weight of Almodóvar’s visual prowess. The film crumples in upon itself in the third act, but let’s remember that a disappointment within the context of this director’s filmography would be the magnum opus of most anybody else. 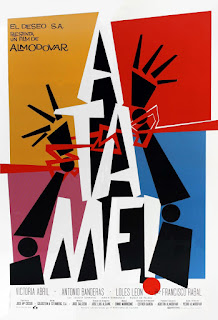 A newly released mental patient kidnaps his favorite movie star and ties her up in her apartment to make a case for why she should marry him.

Tie Me Up! Tie Me Down! is essentially a bold-faced challenge to anybody who thought that Law of Desire was too kinky. It might boast the shallowest, most straightforward narrative I’ve seen in one of his films, but that doesn’t stop it from being a sexually dynamic, uproariously silly, sublimely weird erotic thriller. It suffers from the los of Carmen Maura (the up-for-anything actress who stopped working with Almodóvar for 18 years after a tough experience on the set of his previous film, Mujeres al Borde de un Ataque de Nervios), but what female lead Victoria Abril lacks in personality, she makes up for in wounded vulnerability.

Tie Me Up! Tie Me Down! is an intriguing evolution from Law of Desire, upgrading the sympathy for its villain along with the depth and complexity of Antonio Banderas’ performance. While the story may not have as many twists and turns, it shows a heretofore unseen focus on developing one particular character, showcasing Banderas as the true movie star he is. The really interesting thing about the cut-and-dry plot keeping the villain in the spotlight is that the film is unmistakably an entry in the horror genre. You don’t just hire The Thing composer Ennio Morricone by accident.

Of course, Almodóvar can’t keep his finger on any one genre for more than about 20 seconds, but the horror influence is certainly felt. So far, every single movie of his that I’ve seen has either been explicitly about cinema or features a character who works in the film industry, but this is his first to center almost entirely over the production of a B-horror film. Again, this is certainly no coincidence. His passion for the subject bleeds around the edges of the frame, and these scenes on the movie set number among his most effortlessly funny material.

I can’t stress enough that the story itself is a touch weaker than it could have been, but I’ll be damned if h doesn’t pull out the stops everywhere else. The foreshadowing in the script is dense and satisfying, and a recurring shot from the film-within-the-film is a woefully perfect cinematic image (a body swinging on a rope that resembles the pendulum of a grandfather clock). Plus, his characters, even the ones that only appear in a single scene, are given startling emotional depth. They’re like stepping into a puddle only to realize that your foot has plunged into a pothole.

This scene(and in fact this entire movie) basically defines the entirety of Almodóvar’s sexy, lighthearted, fearless filmography. So, yeah. Don’t write it off just because the A-plot is a wee bit thin.