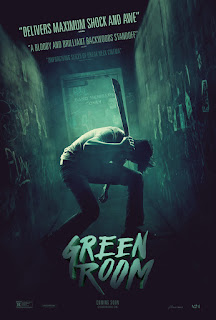 It definitely helps to have been alive during the 80’s to appreciate the punk movement. I mean, it’s not like I’m against liking 80’s pop culture (and boy is that the understatement of the century). Slasher movies form the very core of my being, and I can discuss the intricacies of the Duran Duran discography like it’s my job (Rio might have stronger singles, but Seven and the Ragged Tiger is where it’s at). It’s just that a thorough appreciation of the punk scene requires a certain nihilistic standpoint that could only have sprouted from the fertile loam of Reaganomics under the shadow of impending nuclear doom.

So as much as I’d like to live outside the established norms of society, there’s not a punk bone in my body. This severely limits my ability to connect with Jeremy Saulnier’s Green Room on a superficial aesthetic level in addition to its deeper, thematic underpinnings. That’s no fault of the film’s, just my own bias. But that’s enough dilly-dallying. Let’s knock laced-up boots with that plot! 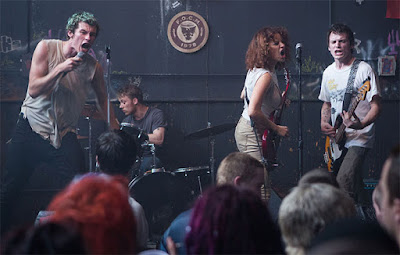 And then we’ll mosh with some analysis.

In Green Room, down-on-their-luck punk band The Ain’t Rights – led by Pat (Anton Yelchin) alongside Sam (Alia Shawcat), Reece (Joe Cole), and Tiger (Callum Turner) – get a gig at a crummy bar buried in the lush woods of the Pacific Northwest. This club turns out to be a skinhead joint run by Darcy (Patrick Stewart). After accidentally witnessing a murder, The Ain’t Rights and defector Amber (Imogen Poots) are trapped in the club’s Green room, forced to fight their way out through a crowd of Neo-Nazi thugs with guns, knives, and attack dogs.

What Green Room has going for it is a strong directorial hand. Although Saulnier’s ponderous, nihilist indie milieu isn’t exactly in my wheelhouse, he lets his frame breathe, vividly displaying the majestic expanse of his exteriors in widescreen and reversing that aesthetic to highlight the cramped claustrophobia of our trapped heroes indoors.

And when that pace tightens up and sh*t hits the fan, we get some of the most well-realized gore I’ve seen in years. I’ve always said that movies can cut off heads and dismember limbs with abandon, but where it gets truly grisly is when the gore gets intimate. That’s the mode in which Green Room operates almost exclusively, slashing flesh with box cutters, smashing small but vital bones, and just generally showing its characters a pretty bad time. There’s a lot of it, but it’s never over-the-top.

There are no cartoonish geysers of blood in Green Room (if there were, it would be called Red Room. Eh? Eh?). There are no bombastic, gooey rippings and slashings. It’s all up close, personal, and so well made that your stomach won’t unknot for hours. 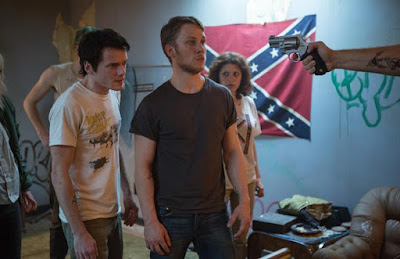 The popcorn will just start piling up in your esophagus like it’s rush hour.

Green Room also has a sly comedy edge, perhaps given away by the casting of Alia Shawcat (who, to be fair, gives a very serious, convincing performance). There are jokes slipped in so subtly that you barely even notice that your disgusted grimace has converted into a grin. Most of the greatest material is delivered under her breath by Imogen Poots, whose careless character is disconnected from our main group and thus totally unpredictable.

Frankly, it’s the best performance of her entire career, effortlessly cool but with splinters of “at the end of her rope” vulnerability. It’s the first time she’s ever stood out in any of the many great ensemble casts she’s somehow found herself in (28 Weeks Later, Popstar: Never Stop Never Stopping, That Awkward Moment, Fright Night, V for Vendetta – she’s been everywhere and never made a mark, like a pretty blonde Where’s Waldo).

I suppose since we’re talking about the acting, I should bring up Patrick Stewart. His villainous turn is definitely a change of pace for the much-typecast actor, but to be completely honest, he’s not given much to do here. He imbues his role with a chilling, soft-spoken menace, but his scenes are so separate from the bulk of the plot, it reeks of Three Days on Set-itis. His antagonistic reversal is solid, but honestly I’d prefer either the ecstatic vamping of a Juliette Lewis in Jem and the Holograms or the intimately involved participation of a Heath Ledger’s Joker. As it stands, Stewart is performing well, but he’s pointed in the complete opposite direction of the movie itself. 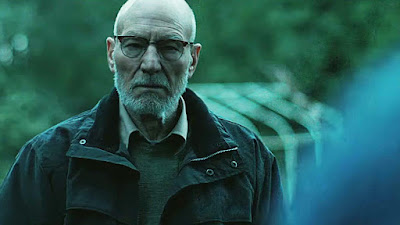 At least he didn’t have to shave his head for the role.

While many individual elements of Green Room are strong, they never really cohere into a full, satisfying story. An intensely erratic lot is eventually drowned in a bucket of blood as the thriller mechanics take over, and the characters just float through their predicament. The only one who changes or adapts in any way is Pat, but we get so little sense of who he is at the beginning of the film that his descent into madness has zero frame of reference. Although, there is a pretty solid fart joke, so who am I to complain?

Green Room is a tense, effective thriller even if it didn’t make as much of an impression on me as I wish it did. It’s a swell-looking piece made by a talented team. It might not be for me, but that doesn’t mean it ain’t for you. As long as you’re OK with gruesome violence that makes you want to staple your eyes shut, feel free to go ahead and check it out.

TL;DR: Green Room is a well made, tense, gory thriller that lacks a certain sense of depth.
Rating: 6/10
Word Count: 969
Also sprach Brennan at 8:45 AM