American Psycho (For our Scream 101 episode about this very film, click here.) 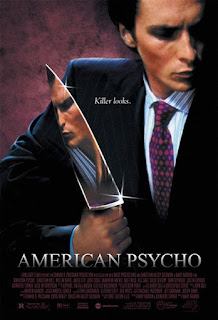 A pent-up Wall Street VP lashes out in a variety of homicidal ways.

American Psycho is a crazy film. One of the few generally accepted horror classics that I hadn’t seen, it defied my expectations at every turn. Based on the controversial Bret Easton Ellis novel that divided critics between viewing it as a dressed-up misogynist tract or a razor-sharp satire, the film was directed by – of all species – a woman. In case you’ve never read this blog before, let me make it very clear that this puts me firmly in the movie’s camp pretty much from the get-go. As far as I can figure it, this is the only popularly regarded staple horror film to have a woman behind the camera (I’m not counting The Babadook, which is far too new to qualify as a classic, as much as I may love it. And I’m certainly not counting Freddy’s Dead: The Final Nightmare).

And how does having a female director affect the horror and humor of American Psycho? Not one whit. Well, maybe we linger a little longer on a showering Christian Bale, but you ain’t catching me complaining there. Other than that, it’s a perfectly sharp yuppie satire for people who liked Fight Club a little too much.

Perfectly skewering the venal, acquisitive nature of Reaganomics-fueled Wall Streeters who are all shallow, greedy, and interchangeable, American Psycho depicts the meltdown of a single individual: Christian Bale’s Patrick Bateman – in this massive horde. As he strains to rein in his homicidal outburst, his peers ignore him entirely, even when he publicly confesses to his many sins. This is best encapsulated in a key scene where Bateman trundles a body into the trunk of a cab and a passing coworker coos over the trendy duffel bag he’s using to perform the deed. This is a world where you can be a murderer or, in fact, be murdered yourself, and you won’t make the slightest dent in the indestructibly grinding clockwork of capitalism.

It sounds intense, and it is. But it’s also pitch-black hilarious humor so grim that even the folks on the gallows might find it distasteful. Patrick Bateman is a man who murders people who can nab reservations at better restaurants than he can, discussing the finer points of Huey Lewis and the News while zipping up a plastic poncho to protect his designer suit from stains. Patrick Bateman is a man who trembles at the mere sight of  trendy business card, who has a stroke of panic when an opponent’s apartment is nicer than his. His viewpoints and motivations are so pointlessly inane that you can’t help but laugh, even as you cringe at the thought that the world around him allows him to get away with his crimes.

The only thing stopping American Psycho from being a flat-out black comedy masterpiece is a tendency toward repetition in the second act. Every scene follows a very precise structure, hobbling its ability to shock. A glorious ATM scene that simultaneously implies that Money is God and kicks the film’s craziest sequence into gear provides the jolt that the system needs, but the film enters a holding pattern for a little too long to preserve my patience. But we can’t all be perfect. American Psycho is a clever, superb little lick that’s just as keen to reference The Texas Chain Saw Massacre as Ivana Trump. I love that, even if it houses a half hour that falls short of being a masterpiece. 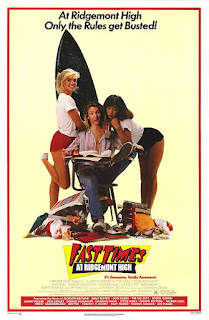 Another entry in an exploitation genre secretly helmed by a woman, Fast Times at Ridgemont High definitely wears its gender on its sleeve, at least a teensy bit more. Despite its unfair proportion of bare breasts (a male full frontal scene was excised by the ever-progressive MPAA), Ridgemont High is first and foremost a story of a young woman discovering her sexuality and learning what she wants from men. Of course, this is a rote toss-up between a smooth talking stud and a namby pamby Nice Guy, but this was 1982. Let’s not expect too much.

This young woman, played by Jennifer Jason Leigh in the role that made her a star (though she showed great promise in the previous year’s Eyes of a Stranger), is a sexually active teenager treated with a tremendous amount of respect. Her sexual misadventures are never presented as shameful, and an abortion scene late in the film is presented as a natural – if difficult – part of life, used to further Ridgemont High’s sweetest relationship, between Leigh and her ne’er do-well brother Judge Reinhold.

Of course, she’s the only character given anything even remotely resembling a story arc. The movie around her is a haphazard explosion of random, occasionally comic vignettes following stoners, football players, cool guts, and nerds through their daily lives. Each fragmented piece is part of a vast mosaic, depicting nothing in particular. It’s vexing, and the tendency to showcase overlong, almost actively unfunny sequences (an imaginary surfing championship interview, an enraged football player winning a game) is damning. To be fair, I have the personal bias that Sean Penn’s stoner drawl and Robert Romanus’ droning deadpan rub me exactly the wrong way, like a sandpaper suit.

This total disconnection from the concept of “story” or “character” is intensely frustrating and the movie’s habit of poor continuity editing only highlights how scraped-together the overarching plot feels. Even Phoebe Cates’ iconic bikini scene suffers from – frankly – a dreadful botch-job on the part of the splicer. This is less like cutting a movie and more like cutting the cheese (Hey! Rimshot!).

Of course, the “time in a bottle” aspect of Ridgemont High does much to soothe any wounds it may have caused. With a pitch perfect soundtrack of 80’s hits that have actually aged terrifically (Jackson Browne, The Go-Go’s, The Cars… This is a synthcrap-free zone) and a horde of future stars (joining Penn and Leigh are Forest Whitaker, Nicolas Cage, and horror icons Amanda Wyss – Freddy Krueger’s first victim in A Nightmare on Elm Street – and Kelli Maroney, who would eventually return to the Sherman Oaks Galleria where this film was shot four years later in Chopping Mall), Fast Times at Ridgemont High is a dreamy time capsule of days gone by.

It might not be a perfect high school sex romp, but it’s decently funny and occasionally sweet. I can make do with that while jamming to “We Got the Beat.”