In which we release mini-reviews of two films that pit two teams who have a lot in common against one another. 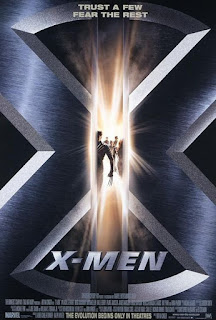 Metal-clawed Wolverine and life-sucking Rogue discover the X-Men, a team of mutants who want to stop the metal-controlling Magneto from carrying out an evil plot against the government, which is considering implementing a Mutant Registration Act.

You know the fiery hellscape of superhero movies that Hollywood has become? For better or for worse, our current boom of caped crusaders can be traced directly back to X-Men, director Bryan Singer’s first foray into comic books. X-Men was hardly the first Marvel movie, but it was the film that resurrected the brand, leading to the dizzying heights of Spider-Man and Iron Man and the crushing lows of Zack Snyder’s parade of half-cocked abortions.

But let’s scrub all that history and all those feelings away to come face to face with X-Men. The comic movie landscape has been quiet as of late. Hugh Jackman is not yet a megastar. Bryan Singer barely knew that Superman existed. It’s the turn of the millennium and the U.S. has survived the potential horror of Y2K, yet is about to be plunged into a long national nightmare the following September. But for now, the world looks fresh and full of potential. Nobody seems to have noticed yet that George W. Bush is a wee bit kooky. The Backstreet Boys are still a thing. For the time, the world seems pretty OK.

Enter X-Men. For a time of such (relative) peace, this film is starkly political, which was pretty much unheard of for comic adaptations. You see, although America was coasting along alright, there were plenty of minority groups that weren’t getting the TLC they deserved, one of which Bryan Singer had personal attachments to: the LGBT community. A group that was despised for something they were born with and couldn’t control, feared following the AIDS epidemic in the 80’s, they mapped almost perfectly onto the X-Men’s own persecution, updating the series’ original subtext, relating to the Civil Rights movement of the 60’s.

It’s a bleak, gray film with a sharp political edge, which makes it great. But it’s also a fun action film with engaging characters and the birth of Hugh Jackman’s meteoric rise to stardom, which made it massively successful. Mind you, it’s no masterpiece. As fun as the characters are to watch, there are plenty of X-Men who are choked out by the Big Guns (Wolverine, Rogue, Professor X, Magneto…) so they don’t get the development they sorely need, and everything about Halle Berry’s Storm is a head-to-toe misstep from her eviscerated South African accent to her battering ram dialogue (Do you know what happens to a blogger when he has to listen to that line about a toad being struck by lightning? The same perplexed disgust as everyone else.).

With a relatively low budget and certain pieces in place that wouldn’t fully begin to pay off until later entries in the series (*cough cough* Sabretooth), X-Men is better as a pilot for the franchise than it is as a work of cinema, but it’s still tremendous fun. From a mind-numbingly on-the-nose battle atop the Statue of Liberty to Ian McKellen’s James Bondian over-the-top gravity (including a massive mutation machine and a decked out Evil Lair), X-Men is a lurid comic book movie on top of its substantial political agenda, and I greatly enjoy both of those things. 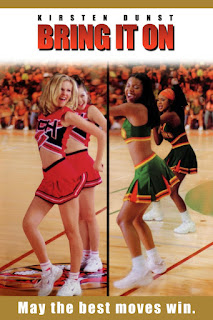 When a high school senior becomes cheerleading captain, she discovers that her predecessor had been stealing routines from an underprivileged school. As she makes peace with an edgy newcomer, will she lead the team to a literal victory at the National Cheerleading Competition or a moral victory?

You know those zeitgeist movies that all your friends were quoting in middle school but you just never got around to watching? Bring It On is one of mine, and while I’m glad to have finally seen it, being immune to the nostalgia factor is like peeping behind the Wizard of Oz’s curtain. It’s not really as great as everyone would have you believe, though it’s hardly an awful movie. It’s just that, rather than being a gut-splitting, generation-defining work, it’s a decent wisp of teen fluff.

If you’ve seen any high school movie from the 90’s, you pretty much know what to expect here: Lots of emphatic teen acting that’s more Disney Channel than Uta Hagen and a heaping helping of fabricated slang that visibly begs for entry into the popular lexicon: “We can’t mack in front of the parentals.” “She puts the whore in horrifying.” This stuff practically carbon dates he film, as if the mix tape that’s actually on a cassette and the teen girl begging for a private phone line haven’t already done it well enough. It works as a cheesy glimpse into times gone by, but it’s a pretty routine film.

The story isn’t so much an organic arc as a 90-minute long montage of haphazardly-placed teen movie scene, but I would like to give it credit for having a surprising amount off grace when handling the topic of race relations and white privilege in the public school system. I can’t say I expected that in my cheerleading movie, but for the most part, bring it on is a little too concerned with the trivialities of cheerleading competitions to be of particular interest (although, amusingly, Glee would cop this movie’s exact formula for nearly every season finale).

Weighed down by too many tropes (the edgy girl who learns to embrace her femininity, the gay BFF who has almost zero interaction with dudes), Bring It On limps across the finish line in vaguely amusing but generally unimpressive style. The one scene that really did stand out to me is an awkward slumber party flirtation between Kirsten Dunst and her character’s best friend’s brother while brushing their teeth. It’s a perfect little microcosm of awkward teen romance. Their oddly competitive dental hygiene is effortlessly cute and terrifically acted, but it’s also romantically charged in a way that the rest of their interaction is patently not.

If I had to sit through the rest of this OK film in order to earn one sterling scene, it’s not a half-bad tradeoff. It’s just not an all-good one, which is disappointing.