The Evil Is Gone From Here 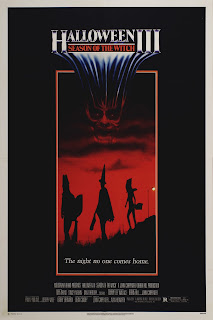 And here we are. Just like that, our October marathon has brought us to the most infamous franchise flick of perhaps the entire decade: Halloween III: Season of the Witch. Yup, this is the Halloween film without Michael Myers. Cue the dramatic music.

This is how the story goes: Halloween II was never supposed to be about Laurie Strode and her bemasked boogeyman brother. The original intention was that the Halloween franchise would be an anthology, telling a different spooky tale about the holiday every year. Let’s cut to the chase here. 47 million dollars later (on a budget of $300,000), that dream was not going to become a reality. Michael Myers was back and synthier than ever. However, Halloween II pretty emphatically killed off both Michael and his arch-nemesis, the linguistically uninhibited Dr. Loomis, in a massive explosion. How could they possibly expect them to come back from that?

So after Halloween II made a clean slice through cinemas, the anthology idea was resurrected. Here is the story they chose.

After Harry Grimbridge (Al Berry) is mysteriously murdered in the hospital following a life-threatening incident, his bereaved daughter Elli (Stacey Nelkin) and his doctor Daniel Challis (Tom Atkins of Night of the Creeps and Maniac Cop) team up to investigate a Halloween mask that seems to be involved in the case. Their sleuthing takes them to the small town of Santa Mira, California, the home of the massively popular Silver Shamrock mask company.

Silver Shamrock is planning a big giveaway following an October 31st broadcast of the horror classic Halloween (hey, I know that movie!). Our intrepid gumshoes (after a night of vigorous genital calisthenics, courtesy of Tom Atkins being Tom Atkins) begin to snoop around town and uncover a secret plot by the company’s owner Conal Cochran (Dan O’Herlihy) to utilize the masks (and their secret powers, activated by a chip off one of the blocks of Stonehenge – making this and Troll 2 the only evil Stonehenge movies that I’m aware of) in a grisly sacrifice to honor the druid festival of Samhain. 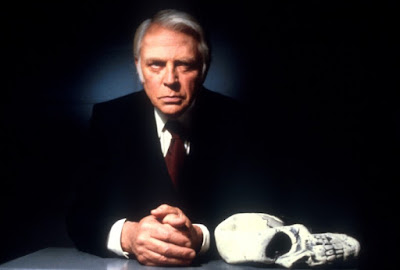 Dr. Loomis may be tragically missed from this film, but his butchering of the pronunciation of Samhain is not.

Let’s make one thing clear. A Michael-less Halloween movie doesn’t bother me one bit. I’ve been through thick and thin with this genre: an imposter Jason Voorhees, a rock-singing driller killer, a prom ghost who haunts neither the first nor last films of her franchise, a troll film about goblins, a Last House on the Left Part II that was released a year before that film, Silent Night, Deadly Night Part 2… I could go on. I’ve seen and survived it all.

This puts me in a much better position to approach this film than the audiences of 1982, eager for the continued misadventures of one Mssr. Myers. I’m ready to take a crack at it, but I never want you to forget the perturbed reaction this flick received upon its initial release. It’s important to understand that feeling, because Halloween III is absolutely nutso, with or without the dissonance of an MIA boogeyman.

This is its secret strength, and the reason that legions of Halloween fans have slowly been revisiting it and elevating it to cult status. Of course, that’s just knocking it from one extreme pole to the other. The love and hate of fandom is intense, passionate, and knows no moderation. But the truth is that Halloween III is neither a miserable scum bucket nor an overlooked glittering diamond. Are you ready to hear the truth? Can you handle the truth? 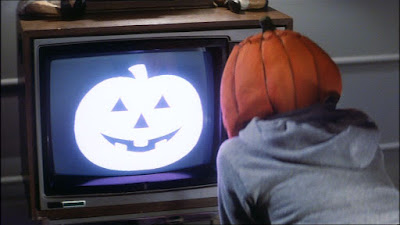 The truth is out there.

In its way, Halloween III is the perfect anthology tale. What it lacks in overall arc or scope it makes up for with scores of twists and turns, buckets of gooey goodness, and an unflagging energy. It’s not a true classic like the original Halloween (though what Part 3 is?), but it’s an emphatic campfire tale. First of all, it’s certainly the goriest flick in the franchise so far, but the carnage it curates is gleeful and zestily creative. Halloween III has it all. Head ripping! Laser beams! Bugs squishing out of eye sockets! These sequences are presented with the boundless enthusiasm of a kid rifling thorough their chest of toys.

This unabating sense of fun also permeates the characters themselves. Obviously, Tom Atkins is no stranger to comic roles, but his doctor oozes raw, sensuality in levels so ridiculously high they’re unfit for human consumption. And though no person on earth could match his animal power, Nelkin gives it a daring go, leapfrogging between the bereaved damsel in distress and the horny vixen with see-through pockets (the ludicrous sensibility also spreads o the costuming – this way 1982, after all). The cherry on top is O’Herlihy, whose Cochran is a scenery chewing villain to the utmost degree. His charismatic mustache twirling is so fierce that he has to borrow Atkins’ mustache for backup. 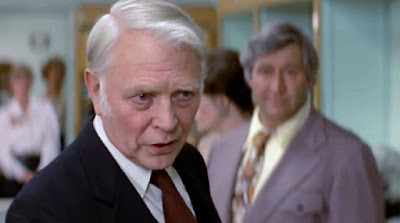 He is also this film’s recipient of the Donald Pleasance Hyperbolic Loquacity medal of honor.

Honestly, Halloween III feels a little like an amped-up Scooby Doo episode, with all the camp and entertainment value that that implies. No moment is perhaps more indicative of this than our two sleuths sneaking into the villain’s lair behind a rolling cart. It’s pure cartoon mayhem peppered with gruesome Raimi-esque gore setpieces. It’s almost impossible not to have a good time while watching it play out. That is, unless you were expecting a silent psycho stalking babysitter.

Ah, there’s the rub. As jubilantly enjoyable as Halloween III is, it sticks out like a sore thumb in the middle of its franchise. As heartily as I enjoy it, context is killer. This frivolous exercise in stretching those EC Comics muscles has no place among the continued adventures of Mikey and his Knife. Removed completely from its surroundings, it stands as a shallow but effervescent piece of camp horror (as do most slashers, come to think of it), but the truth of the matter is that it’s just not polished enough to cleanly break those bonds.

Well, that’s why it will never be truly accepted back into the fold. But heck, I like it. Not enough to throw my wright behind it when push comes to shove, but nothing like this has ever been attempted before and I think it’s something truly special. But Michael or not, I’m still a little pissed off that there’s no witch in the movie. I feel like both titles being misnomers is a little excessive, don’t you think?