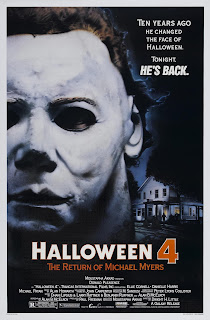 After the debacle that was the Myers-free Halloween III: Season of the Witch, the entire franchise went dormant for over half a decade. By the time it came wheezing back into cinemas waving the white flag of its desperately placating title – Halloween 4: the Return of Michael Myers – it was already 1988, perilously close to the death rattle of the slasher genre.

At this point in the decade, slashers were still a viable box office draw, but only if they were attached to franchise names. Luckily for Halloween 4, it was coming on the heels of one of the most successful slasher films of all time. The franchise may have lost its way, but that name still had caché. 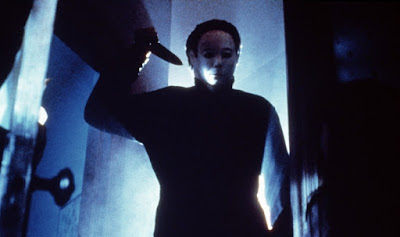 Unfortunately for Cheerleader Camp, Destroyer, and Amsterdamned. But really, who would have watched them anyway? Oh right, me.

Halloween 4 finds itself at the beginning of a trilogy (though it doesn’t know it yet) centering on Haddonfield youth Jamie Lloyd (Danielle Harris). Jamie is the daughter of Laurie Strode (played by a headshot of Jamie Lee Curtis), who has since passed away and left her in the care of a foster family. Not many details are given, but I like to imagine that Laurie married Lance Guest the EMT and subsequently perished in a boating accident like the parents from Frozen.

Jamie’s adopted sister Rachel (Ellie Cornell) wants to spend Halloween night with her boyfriend Brady (Sasha Jenson), but is forced by her parents to take Jamie trick or treating. Brady, being a dude in a slasher movie and essentially a walking pair of testicles, immediately goes home with Kelly (Kathleen Kinmont), a girl with a bigger set of candy corns. When, as the title promises, Michael Myers (George P. Wilbur) breaks out of the hospital and returns to Haddonfield, murderously pursuing his niece and her sister, the girls take refuge in the Sheriff’s house (where Brady and Kelly have holed u) to wait out the night under police protection. Awkward.

And of course Dr. Loomis (Donald Pleasance) returns, because how else would we know that Michael Myers is Pure Evil and that we don’t understand what death is?

Apparently hospital explosions are hardly stronger than accidentally placing your hand on a stove, at least if you’ve got a franchise riding on your back.

So here’s the deal. It’s basically impossible to have a lower budget than the original Halloween, which was pretty much made for the cost of a hardback book at Barnes and Noble. As exorbitant as that price may seem, it’s a pittance in the world of Hollywood filmmaking. Halloween 4’s allowance was easily 16 times that, but Dwight Little isn’t John Carpenter. He could have had 100 million and still not made a film as richly complex as Halloween. Although, to be fair, John Carpenter didn’t direct Free Willy 2: The Adventure Home, so Little has that over him.

But the fact remains that Halloween 4 looks more than a little tacky, which is by far its biggest flaw. The Michael Myers mask looks like a bargain bin purchase from the 99 cent store, and the makeup that bestows Dr. Loomis with his “hideously” burned visage brings to mind half-dried pancake batter. Not to mention it shifts position every time it thinks we’re not looking. If you’re craving convincing effects, you’re gonna stay hungry. 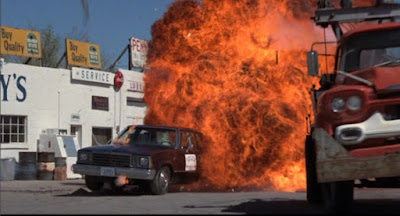 Although there is a pretty cool exploding gas station, because everything spontaneously combusts in 80’s horror. It’s a venerable tradition.

So that’s the readout when you weight Halloween 4 by Halloween standards. But that’s hardly fair, considering that that film is one of the true masterpieces of modern horror cinema. When you take it at slasher standards, the outlook brightens considerably. For a late 80’s creeper feature, the storytelling at work in Halloween 4 might as well be Chaucer.

It might sound unbelievable to those of you who are keen followers of Census Bloodbath, but this film actually has characters. I know, right? Perhaps they’re a bit fundamental, but they have substance, and Rachel specifically has an honest to goodness arc as she transforms from a selfish teenage brat into a caring older sister. On top of that (my, are we being spoiled), there are multiple storylines that weave in and out of Haddonfield’s ensigns, all of which come together in a remarkably satisfying manner. It’s almost like they think “seven to twelve teens gather together, then die” isn’t a solid enough structure to hang a story off of. 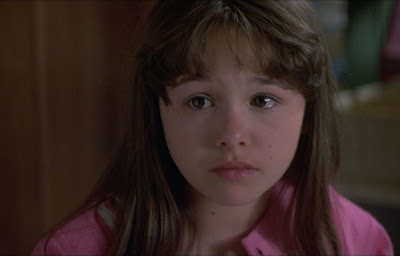 Halloween 4 also differs from the norm by actually casting people with more than a tattered shred of talent. Of course it goes without saying that Donald Pleasance is at the top of the heap, toning down his florid spittle spraying to a manageable dull roar, but he’s not the only standout. Ellie Cornell is a tenacious Final Girl with real vulnerability, incredible strength, and a tremendous scream (you’d think good screams would be a given in the horror genre, but that kind of thinking will only bring trouble).

Even young Danielle Harris knocks ‘em down, with a layered rendition of a young girl desperately in search of validation and identity. She seems decades older than she really is, a haunting effect that’s creepier than anything else in the movie but totally fits her tragically orphaned character. She proves herself more than worthy to carry on the royal lineage of the genre’s reigning Scream Queen (both within the movie and in real life – Curtis bailed out of horror after Halloween II wasted her and drowned her beneath a waxen wig.), but some tense, character-based chills tossed together with a dark, smoky, outdoor atmosphere is nothing to cry about.

If you really want to complain about something, you have limited options. There’s the aforementioned tackiness, of course, but that’s hardly out of character for the late 80’s. The only other element you can latch onto is the film’s vanilla approach to exploitation. A promising sex scene manages to avoid showing female or male chests, and the 1988 gore just ain’t what it used to be. But Halloween 4 is strong enough as a piece of cinema that it’s hard to feel cheated by the missing slasher trappings. Of course, it’s still a cheesy slasher at heart, but it’s a dark, engaging entry that’s absolutely worth checking out.