A Thorn In My Side 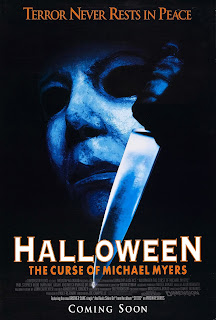 Part sixes can be good. Friday the 13th Part VI: Jason Lives is an excellent cross between gothic horror and winking humor, and Saw VI actually had a political agenda other than vacuuming people’s guts out. So forgive me for not adjusting the curve for Halloween: The Curse of Michael Myers, the first flat-out abysmal entry in the series. Sure, I also despised Halloween 5, but that film was too silly to provoke any hardcore ire.

Halloween 6 (which lacks the number in the official title, because producers already didn’t want audiences to catch on to how damn many of these films there were) does not have that luxury. No, it’s your run of the mill blood-boiling suckfest, and it’s all the worse for it. To be fair, the film was so extensively tampered with by overzealous studio heads that it’s lucky it even remotely resembles a coherent narrative and not a jumbled page from an asylum inmate’s scrapbook. However, my sympathy for an addled movie does not actually extend to enjoying it. 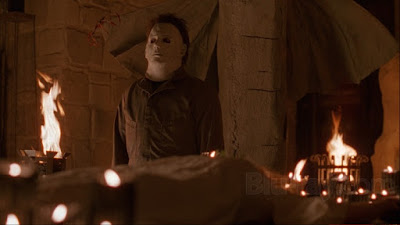 I’m not enough of a fanboy to be that magnanimous.

Halloween 6 goes like this: It has been six years since Michael Myers (George P. Wilbur returning from Halloween 4) and his niece Jamie Lloyd (played by the singularly unprepossessing J. C. Brandy, who looks about fifteen years too old for the part) disappeared in a police station explosion. We open on Jamie giving birth and escaping a cult compound, whereupon she hides her baby in a bus station bathroom before being gruesomely offed in an abandoned farmhouse.

Cut to nobody that matters. Relatives of the Strode family have taken up residence in the old Myers house, and they run through about 30 beats of twisted family drama (that never comes up again) over the course of one breakfast. Kara (Marianne Hagan) has recently returned to her family’s home after five years of estrangement, her six-year-old son Danny (Devin Gardner) in tow. Her dowdy mother Debra (Kim Darby) welcomes her with open arms, but her father John (Bradford English) is the undefeated gold medalist of the Dickhat Olympics and relentlessly berates her, calling her son a bastard, at which point Danny pulls a knife on him. Again, this never ever is addressed at any other point in the movie.

Meanwhile, Laurie Strode’s babysitee Tommy Doyle (introducing Paul Stephen Rudd) is all grown up and on the hunt for the Boogeyman. He uses clues in Jamie’s distress call to a radio station to find her baby at the bus depot, then hooks up with Dr. Loomis (Donald Pleasance in his final Halloween film). Their combined hysterical soliloquizing leads us to the knowledge that the druids bestowed Michael Myers with the Curse of Thorn as a baby, forcing him to try and kill his family on the night of Samhain whenever the stars align or the producers need some fast cash. And although the Strodes aren’t technically related to him, he goes after them as well, possibly because he hates the tacky forest green and burnt umber paint job they gave to his house. 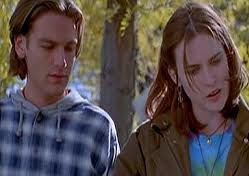 If there’s one thing Michael hates more than his own family, it’s inexplicable teen hookups.

This is one of those movies that I watch so you don’t have to. At every single level, Halloween 6 is a technically incompetent slog and an abrasive insult against John Carpenter’s original masterpiece. Filled with irritating flash cuts to supposedly creepy images, the movie has the attention span of a TeenNick sketch show. When you take that with the lighting that drowns everything in shadow (at one point obscuring all but Tim’s forehead in a “close-up”), it feels like a Capri-Sun commercial as directed by early David Fincher.

And the sound design! It’s so easy to take good sound design for granted, but when it’s improperly done, it can tear a movie apart from the floorboards up. Halloween 6 might just have the single worst audio job I’ve ever seen in a reportedly professional film. The baby’s cries could only have been recorded in a tin outhouse for all the reverb on the canned track, and the kills sound like Michael is stabbing victims with a small piece of Velcro. Which, incidentally, I would pay to see. Also, the foley artist must have had a hot date that night, because every single sound cue in the rushed, sloppy mix is exactly the same. Unless it’s an artistic choice that closing a book, opening a door, and beaning someone with a fire poker all make the same identical, slightly metallic noise. 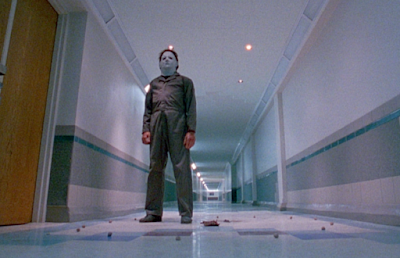 Perhaps it was an attempt to tonally match the violently wretched, screeching industrial music masquerading as a John Carpenter score.

Narrative logic went out the window back in Halloween 5 when Michael was revealed to have a tattoo that we haven’t seen the previous three times, but there are some extremely basic needs that fail to be met by the story. Let me ask you this: Who is the main character of Halloween 6? The obsessed Tommy Doyle, the eye-popping Dr. Loomis, and the besieged Kara all lurk offscreen for a nearly equal amount of time. There’s two separate innocent children that need protection from at least three villains who are jockeying for position. I’d suggest this was an Eisensteinian approach, emphasizing the socialist ideal of the collective over the individual, but I can’t say for certain that the director of Phantoms is intimately familiar with Soviet film history.

The logical leaps required to make sense of Halloween 6 would make a kangaroo jealous. I haven’t the foggiest idea how Michael would know where Barry was, or even have the inclination to kill him while in the middle of a siege on a house on the opposite end of town. Likewise, I’m very worried for the continued employment of the janitorial staff at the Haddonfield bus depot, who neither noticed the trail of blood across the floor nor the baby stuffed into the bathroom cupboard. The entire film is cobbled together from this sort of mildly confusing, perpetually frustrating detritus.

Michael Myers himself suffers from the film’s powerful negative aura. Though no mask could beat the combined efforts of Halloween 4 and 5’s sheer neck-flapping dime store tackiness, the hair on this one is teased out into Johnny Rotten oblivion, giving Michael the silhouette of a birthday clown. 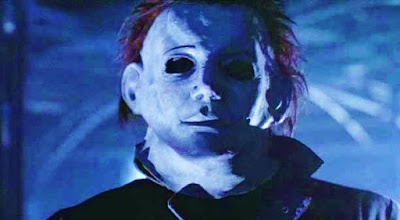 I guess that’s intimidating in its own right, but it’s not exactly Beacon of Pure Evil.

Given the mire they have to trudge through, it should come as no surprise that the cast can’t make heads or tails of this movie. Donald Pleasance, just months before his tragic death, can’t bring himself to care about the dreck he’s spouting, reducing his scenery chewing to a mere nibble.  Paul Rudd does an OK job, his kind face and adorable almond yes clashing with the off-putting single-mindedness of Tommy Doyle. He does indulge himself with a couple of his trademark goody grins, but for the most part he provides the film with an unnamable dissonant quality that helps it along. As for the rest? I can’t imagine that they had the budget to fill everyone's mouths with marbles, but they sure did pull off that effect with aplomb.

I’ll say one food thing before we wrap up, just to leave things in a pleasant frame of mind. The gore, when it arrives, is pretty well constructed. There are only three moments in particular that stand out, but one is gruesome, one is devastating, and the other is a campy treasure. I can’t really complain about that. Now, if you’ll excuse me, I’m going to take a page from Tim’s book and put my face directly beneath the shower nozzle to blast sand my brain of the memory of this painful, painful film.

Killer: Michael Myers (George P. Wilbur)
Final Girl: Tommy Doyle (Paul Rudd) feat. Kara Strode (Marianne Hagan)
Best Kill: “John is such a dick, he’d better die painfully,” I said. I got my wish when he was split up the abdomen, impaled on a fuse box, and electrocuted, at which point his head explodes. Rah rah, Michael!
Sign of the Times: Doting mother or Twin Peaks log lady? You decide. 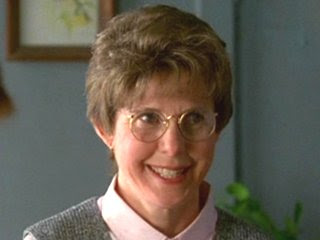