Do The Harlem Shake

Appropriately enough for my spring cleaning period, two of the films I watched this week are very perfect, equally strange echoes of one another. They both deal with the topic of urban education in Harlem, but one focuses on the plight of the white teacher and was directed by master of horror Wes Craven, and the other focuses on a black teen and was based on the novel Push by Sapphire.

Music of the Heart 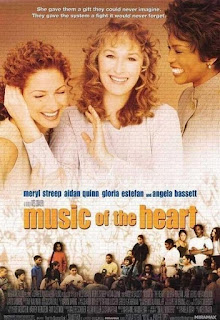 A newly divorced single mother takes the only job she can get – teaching violin to underprivileged kids in a Harlem elementary school.

Music of the Heart is a very special film. It’s the only film in Wes Craven’s career that isn’t horror or a thriller, and I’m immensely pleased he was given the opportunity to make it, even if he did have to strong-arm the producers by threatening not to make Scream 3 (although a world without Scream 3 isn’t necessarily a bleak prospect). This film is but a taste of the world that could have been if Craven hadn’t been pigeonholed as a horror director by the one-two punch of The Last House on the Left and The Hills Have Eyes. Frankly, as a fan, I can’t say I’m sorry it worked out the way it did, but at least this film proves that the man was capable of expanding his horizons.

Unfortunately, that expansion was channeled into a heartwarming biopic, which might just be my least favorite form of cinema after straight-up snuff films. I would have preferred to bestow this movie with a full-ledged review, as I would with any Craven work, but this genre is just too daunting a prospect for the little ol’ horror nerd that I am. That said, the film itself is pretty decent, though woefully generic in the wake of thematically similar flicks like Freedom Writers, Stand and Deliver, Take the Lead, and even Danny DeVito’s Renaissance Man (a film I secretly love).

Craven’s horror upbringing is totally buried (save for one instance in which the classic Vertigo shot – where the background seems to stretch into infinity behind a character – is reversed, with profoundly mystifying results), replaced with fluttering birds and warm, rosy lighting. The film spends a great deal of time cycling through an It’s a Small World-type array of every conceivable urban conflict and occasionally goes alarmingly far out of its way to be Meaningful, but as a low-key character study it excels.

Meryl Streep’s Roberta Guaspari is no airbrushed white savior to these Harlem kiddos. She’s a cracked and broken, immensely weak-willed woman with more character flaws than there are heads in Hannibal Lecter’s pantry. She’s not some perfect Barbie doll whose only flaw is Caring Too Much. This ain’t a Hillary Swank picture, and this ain’t that part of a job interview where they ask “what’s your biggest weakness?” There’s no sugar-coating off this rude, brash, selfish, scared, desperate woman who finds her inner strength through the course of a ten-year teaching career (the time jump in the film is startling at first, but it picks up fast).

Streep is excellent, it must be said, though you can figure one can just assume that at this point. Cloris Leachman (as her mother) seems a little lost in the words at points, but she’s hardly in the film long enough to really matter, and she’s bolstered by its supporting cast including a tough-as-nails Angela Bassett, a proudly subtle Gloria Estefan, and the second-creepiest Culkin brother, Kieran. But Streep is the cream of the crop with her unflinching, raw portrayal of a woman on the brink.

Craven’s typical sense of humor is also at play in Music of the Heart, allowing it to flow smoothly without becoming a dour, didactic treatise. There’s perhaps a bit of an overemphasis on full performances of musical pieces, without which the pace would be snappier and the run time blissfully shorter, but the film never stops being fun, which is much to Craven’s credit.

I’m happy such a singular film exists in the great master’s oeuvre. As a genre devotee I can’t say I’ll ever have the urge to watch it again, but Music of the Heart is a dashing and competent piece of filmmaking. What more could I ask for? 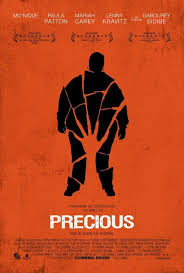 An impoverished, illiterate, overweight Harlem teen attempts to get a basic education while literally everything bad happens to her.

Lee Daniels will not be getting an invitation to my fantasy dinner party. My guess is that he’d more or less immediately start screaming about the hypocrisy of enjoying oneself while there is still turmoil in the Middle East. That said, a personality like that instantly lends itself to Oscarbait filmmaking, and Daniels’ audacious visual style make Precious a tremendously satisfying watch, even if it is never a truly enjoyable one.

For starters, he uses one of the simplest tricks in the book to lay a foundation on which to build his film: a realistic, faux-documentary filming style. Shot largely on handheld cameras that zoom in and out in the middle of shots and occasionally receive an obstructed view of the proceedings, this aesthetic puts the audience right there in Precious’ universe, almost subconsciously implying its authenticity. At intervals, Daniels goes overboard and one gets the impression of being yoked to a catnipped ferret as it runs back and forth around the room, but for the most part it’s not intrusive, in the style popularized by shows like The Office or Parks and Recreation.

With this structure in place, precious builds a mighty empire of daring aesthetic decisions. Many of these revolve around Precious’ fantasies of a better life, the sleek glitziness of which is captured by blissfully still, traditional camerawork. These frequent fantastical intrusions into her daily life can be subtle (a glamorous younger photo of her abusive mother coming to life to coo soft words to her daughter) or alarming (Precious escapes into a staccato fantasy world while being molested by her father – whee…), but they are always aesthetically confident and deeply impactful. These additional touches lessen as the film goes on, but presumably it’s intentional, although the film does lose some of its sparkle from there on out.

Precious is a film dominated by its visual schema, because as a plot there’s almost nothing to it. Something bad happens to Precious, she tries to make a positive change, something worse happens to Precious. Lather, rinse, repeat. The ambiguous ending isn’t nearly as dour as it could have been and – again – the lack of closure is certainly an authorial choice, but this is a film that can’t escape a thick cloud of Importance. It’s certainly an important story to tell, but one absolutely must be in the mood to receive it.

You see, the world where Precious lives, the world where beautiful white people are incessantly pumped into the living room through her TV, is our world, a fact which the film’s entire being endeavors to drive home. In addition to the gritty documentary aesthetic, the actors make great sacrifices to drive the point home. Gabourey Sidibe – hardly a traditional movie star – suffers abuse at the hands of everyone around her, painting Precious as a sort of social turtle, drawing back into herself and speaking almost inaudibly when she feels uncomfortable. Her performance is infinitely varied and certainly breathtaking.

The performers that surround her are likewise tremendously brave, and I don’t mean in the sense that they forgo movie star makeup, though they do. Mo’Nique (who plays Precious’ mother) overcame a childhood of repression to therapeutically portray a gut-wrenching, subtly human, yet startlingly evil role, Paula Patton channels her inner frustrated teacher, and Mariah Carey doesn’t sing a note. That’s true dedication.

Precious is a tough watch, it is a daring tirade, and it is overwhelmingly an actor’s movie. As a showcase for pitch-perfect film technique, it is untouchable, though as a story – even an Important one – it’s a little too unfocused to be truly special.