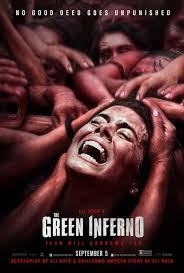 I like to think of myself as somewhat of a horror authority. The couple odd hundred reviews I have catalogued right here should back me up a little bit on that statement. But I must confess, I find myself a bit flummoxed by The Green Inferno, which is a heavy concoction of areas in which I hold microscopically little expertise.

First and foremost, The Green Inferno is a cannibal film in the vein of 1980’s Cannibal Holocaust (which also holds the distinction of being the first found footage film). The only cannibal film I’ve ever seen is the quasi-slasher Anthropophagus, which I admittedly adore, but isn’t quite in the same savage vein. Second and… secondmost, The Green Inferno is an Eli Roth film. I hate to admit my modern horror illiteracy, but I’ve never seen a single frame of footage from a Roth picture before this.

Both of these factors contributed to the film being pulled from its initial 2013 release, presumably because the studios balked at attempting to market such a hardcore production. So you can imagine my surprise when I found myself sickeningly horrified exactly no times. What I should have been prepared for – had I been more Roth-ducated going into the film – is what I got: a cinematically sound, skillfully rendered, erratically xenophobic frat boy Facebook rant. 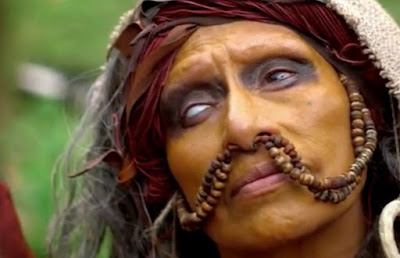 Is it even possible to be racist against Peruvians? Do white people know Peru exists?

During its drawn out, doomed journey from the backwaters of 2013 to now, The Green Inferno has sought to tell us the tale of another doomed journey. College student Justine (Lorenza Izzo) actually starts paying attention in humanities class and decides to join an activist group on campus, against the better judgment of her roommate Kaycee (singer Sky Ferreira, whose eyelids must be made of lead – either that or she was lightly clubbed before each take). And by better judgment, I mean: “activism is gay.” Did I mention that every single line of hers is essentially just Eli Roth shouting his Twitter feed into your eardrums through a megaphone? She’s the toxic younger cousin of the Mary Sue characters: Douchey Sue.

Anyway, Justine decides to join the activists on a trip to Peru to stop a construction crew form destroying the forest and murdering an ancient, untouched civilization in the Amazon. To my considerable displeasure, Kaycee does not go with her, preventing us the delights of watching her get ripped apart by cannibals. However, this means that she’s in less of the movie. It’s a fair trade. The demonstration is a success, but when Justine’s life is endangered in the process, she loses faith in the group’s leader, Alejandro (Ariel Levy). Needles to say, on the way home, their plane goes down and they end up being captured by the very civilization they were attempting to protect, who turnout to be a tribe of murderous cannibals. How come the foreigners in these films are never just lonely accountants or something?

Some might say the big problem with The Green Inferno is that its subject matter is inherently fraught with wildly inappropriate race relations. While I will take a stab at tackling this topic a little later on, this could fill a freaking ten-page thesis, so for the sake of brevity and the spirit of exploitation, let’s forgive our cannibal film its cannibal plot line. The real issue here is that The Green Inferno is light years from being as visceral and shocking as it imagines that it is, which is a profoundly irritating fact.

It must be said that the gore effects provided by Greg Nicotero (of The Walking Dead) and his crew are the A-level work of masters of the craft allowed to do some really exciting, fun stuff that tests the resilience of the American censorship board. It’s top-notch splotch. But the atrocities that they’re called upon to render aren’t too far removed from the zombie mincemeat that audiences get pumped into their homes every week on TV. Maybe we’re just being desensitized, but there’s only one violent sequence in the film that will ultimately challenge the intestinal integrity of a tried-and-true horror veteran.

Don’t get me wrong, the rest of the gore is superb. The film wouldn’t have a severed leg to stand on without it, and two sequences in particular are the best in the film on the strength of well-timed effects. It’s the smugness I can’t tolerate. Even a scatological scene – the last bastion of the desperately controversial – lacks the guts to really sell the grimness of its scenario. A Hangover movie would take more risks with a scene like that. Not that it’s a bad thing to be dissimilar to a Hangover flick, but you get the picture. This movie wouldn’t have you running to join a nunnery. 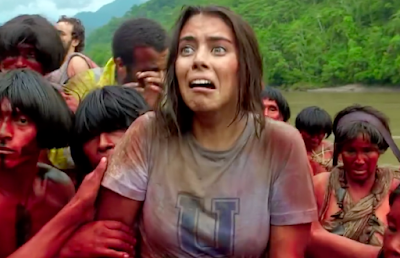 That said, it’s sure to scare the straws right out of all those junior high-ers’ venti passion teas.

This is the course that most of The Green Inferno takes: wildly competent, but without enough juice to push it over the edge. The Amazonian location photography is lush and beautiful, if a bit workmanlike, the surprising sense of humor is a frequently welcome presence is a bit too attuned to gay jokes and fat-shaming for my liking, and the pacing is brisk without anything particularly eventful pushing it forward. It is but it isn’t, all the way across the finish line.

At least the acting is pretty consistent. With one glaring (literally) exception, every actor in the film is at the very least a credible screen presence. The true standouts are the villagers, portrayed by a real lost Amazonian tribe with chilling vérite, bolstered by only two professional performers. I daresay it’s a compelling argument that we should stop casting pop stars in projects when a group of people who had literally never seen a movie before turn in better, more enthralling performances. On top of all this, Lorenza Izzo is openly superb, endowing her character with a warmth and light that exquisitely empties into hollow desperation.

The combined efforts of the cast somewhat elevate the stock flatness of the characters themselves, but come on. This is The Green Inferno. Something was going to have to come along and temper hat nearly unadulterated praise. 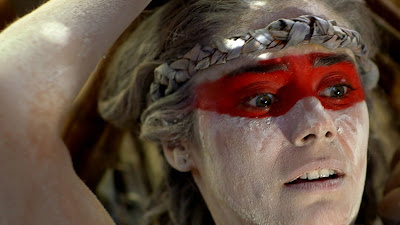 You know how I hate to be the bearer of bad news.

So now comes the moment of truth. Is this film xenophobic? Obviously a solid argument can be made that all films in this vein inherently are. But this is Eli Roth, after all, and he prefers a general smattering of misanthropy for flavor, and the people who really come out worst here are the activists themselves. Don’t come into this film expecting a well-thought-out treatise on the plight of ancient tribes, but it’s not quite as bad as you might expect in terms of treating indigenous tribes as savages. His malformed opinions about social justice in the Internet era end up slipping and spewing bile out of both ends, but in general he vaguely tends toward intimation that hey, these cannibals, they’re people too.

After all, you know what they say.

You are what you eat.

TL;DR: The Green Inferno is a gory, decently fun, but shallow film that wastes its potential.
Rating: 6/10
Should I Spend Money On This? If you're not a jaded horror nerd like me and you're ready for some blood, go for it.
Word Count: 1284
Also sprach Brennan at 9:37 AM