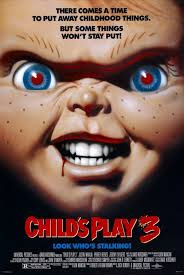 There comes a time in every young franchise’s life when they must embrace childish things. Specifically, I’m referring to camp and humor, which tend to creep up on even the hardiest of horror properties. It took Nightmare on Elm Street two go-rounds for Freddy to transform into a homicidal stand-up comedian, Jason Voorhees’ fifth turn behind the wheel of the machete was marked by self-referential comedy and even a James Bond homage in the opening credits, and Halloween: H20 featured Michael Myers battling a gaggle of Kevin Williamson-weaned teens.

Although Chucky’s humor heyday was still yet to come in 1992, Child’s Play 3 is a clear transition piece, still utilizing the killer doll as a source of fear, but upping the ante on his already-prevalent sarcasm. As a result, it teeters a bit on the brink of two genres, but returning screenwriter Don Mancini manages to hold it together long enough to see it through to the next phase. 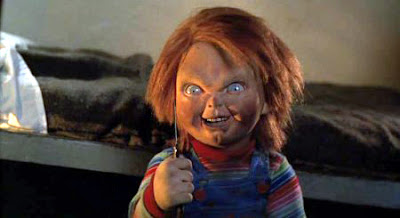 Phase 2: Chucky squares off against Iron Man and whatever Avenger has the cheapest contract.

Child’s Play 3 continues the story of Andy Barclay (now played by Justin Whalin), who has been shuttled through a series of foster homes but had trouble adjusting, probably because they had a severe lack of blondes in rad leather hats. As a last ditch effort, he is sent to military school with the hope that a little straightening out will quell his killer doll fantasies.

Unfortunately for everyone, the greedy Play Pals corporation has restarted production on their popular Good Guys line of dolls, and it just so happens that the plastic used to make the first model was unknowingly spiked with Chucky’s blood. Before OSHA Safety officials could arrive on the scene, Chucky has been resurrected and quickly ships himself off to the Academy. While there, he realizes that this is a new body, so he can transfer his soul into a new person. He picks Tyler (Jeremy Sylvers), an impressionable kid with an absentee father who is desperate for a friend. Now it’s up to Andy to stop Chucky from possessing Tyler’s body, though he must fight through strict military officials and meathead bullies to get there. 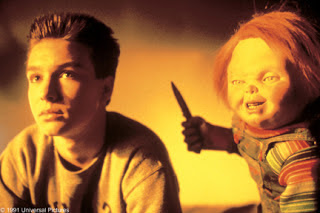 Those nine months were hard on him. Stress has a way of aging a boy.

Coming out only a scant 9 months after Child’s Play 2, it’s a miracle that anything in the film works at all. Hell, it’s a miracle that Chucky isn’t just a paper cutout glued to a popsicle stick. And while this is Don Mancini’s least favorite screenplay and certainly his shallowest, it nevertheless scrounges up a decent setting, a handful of engaging characters, and throws in a scant theme or two when nobody’s looking. Even though it could certainly use tightening up and the low budget hobbles the capacity for particularly cool effects, it remains a fun, breezy watch, pepped up by Brad Dourif’s evergreen performance.

Dourif is like a sponge, absorbing any wacky tonal imbalances with no apparent effort and embracing the ludicrous fun yet chilling otherness of being a killer doll. The best scenes are those that put him front and center, where he leads the film from beat to prearranged beat like a demented drill sergeant. The plot itself might just be a tarted-up rehash of the first two films, but he pummels it along at a steady clip, whether he’s frustratedly pursuing his naïve yet slippery quarry or spouting haircut puns while slashing a manic barber’s throat.

However, while the character comedy is spot-on, Chucky’s tendency toward quipping renders the film a bit of a shallow clone of the later Elm Street films. Mancini would find the proper balance for his humor in Bride of Chucky (which I can’t wait to write about), but for the time being we’re stuck with but a shadow of the comic monolith Chucky would become. However accomplished the performance is it can’t completely save a rushed, lackluster script. 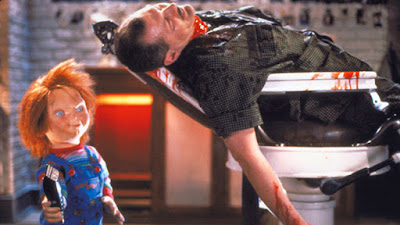 It's a tough pill to swallow.

Despite its shortcomings, Child’s Play 3 does at least bring some new elements to the table. The military school setting provides ample opportunity for unique setpieces and a set of characters at least slightly to the left (left, left, right, left) of the typical slasher milieu. Instead of a parent refusing to believe their child’s story, it’s the brass refusing to allow insubordination, and instead of Chucky causing “accidents’ with assorted household objects like a homicidal Martha Stewart, he wreaks explosive havoc with armory equipment. It’s the same set of stock situations, but the new setting (which I believe hasn’t been used since 1981’s plodding Evilspeak) wrings the last droplets of life from them.

The downside of this is that every actor has the exact same outfit and haircut, so they’re about as distinguishable as the members of ZZ Top. But there is also an added dimension of Chucky stalking people trained in the art of combat, although the film’s most promising character (a kick-ass chick with an attitude) is shunted aside in the finale like a ten dollar wedding present. 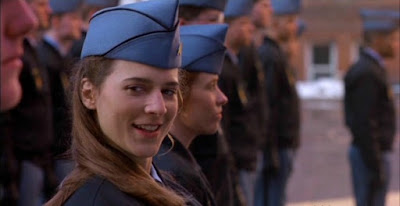 The kills are also only intermittently successful. Whether they were limited by budget or time, they’re generally unremarkable (save Chucky’s gloopy demise, which comes after the film’s longest sustained period of tension – a battle inside a funhouse ride). If I’d wanted to see people keel over without a hint of blood, I’d have watched a 50’s Western instead of a Chucky sequel. Fortunately the circumstances surrounding the murders muster up frissons of fright, especially the very first, in which Chucky uses the various toys in the Play Pals CEO’s office to menace him before taking him out.

So really, though Child’s Play 3 may very well be the weakest of the franchise, I’s still worth a look for Chucky devotees. There’s enough material to render it an affable 90 minutes while the franchise uses it as a stepping stone to greener, bloodier pastures.

Killer: Chucky (Brad Dourif)
Final Girl: Andy Barclay (Justin Whelan) feat. DeSilva (Perrey Reeves)
Best Kill: Colonel Cochran dies of a heart attack before Chucky can get to him.
Sign of the Times: Andy shows up at school with a mullet that looks like he was the victim of a drive-by perpetrated by a gang of Billy Ray Cyrus’ rejected stylists.
Scariest Moment: When Chucky is menacing the Play Pals CEO, he sets two Good Guy dolls on the desk to talk to each other in a continuous loop.
Weirdest Moment: Chucky somehow figures out how to mail himself places
Champion Dialogue: “What are children after all, but consumer trainees?”
Body Count: 8; including Chucky, who sure as hell dies a lot for somebody with six movies under his belt.
TL;DR: Child's Play 3 is a decent, if rather generic second sequel.
Rating: 6/10
Word Count: 1224
Reviews In This Series
Child's Play (Holland, 1988)
Child's Play 2 (Lafia, 1990)
Child's Play 3 (Bender, 1991)
Bride of Chucky (Yu, 1998)
Seed of Chucky (Mancini, 2004)
Curse of Chucky (Mancini, 2013)
Also sprach Brennan at 7:43 AM