Census Bloodbath: Over The Hill 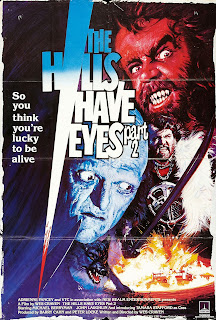 In 1983, Wes Craven was in dire straits. His debut films The Last House on the Left and The Hills Have Eyes were artistically successful but they hardly made him a millionaire. His follow-ups were a score of TV movies and the modestly received Deadly Blessing. And in 1982, he took a bath on Swamp Thing, a mainstream comic book adaptation and an attempt to escape being pigeonholed into low budget horror. He was in dire need of a paycheck.

When the opportunity arose to slap together a cash-in sequel to one of his classic tiles, The Hills Have Eyes Part II was born. Craven has later said that he was so desperate that he would have directed Lassie vs. Godzilla.

He should have directed Lassie vs. Godzilla.

What happened was that this star-crossed sequel ran out of funding, abruptly halted shooting, and the incomplete film was wrenched from Craven. Producers papered flashbacks from the original film over most of the missing bits (though not as obnoxious a number as are present in clip show films like Silent Night, Deadly Night Part 2) and said “screw it,” releasing the Frankensteinian hellbeast onto the world without Craven’s approval.

Even with Craven’s approval, this sequel – which draws influence from the ever-popular slasher genre rather than the grindhouse spirit that birthed it – wouldn’t be any good, but by peeking between the lines we can spot the zany experiment the film might have turned out to be. The film is his only attempt at a straight, by-the-numbers slasher and it goes disastrously awry. Even at the best of times, Craven’s concepts were far from straight. So that’s how we ended up with this bizarre, piecemeal aberration:

In The Hills Have Eyes Part II, surviving family member Bobby Carter (Robert Houston) shows up for ten minutes, never to be heard from again even though it’s implied he’ll arrive to save the day. Since his family’s fatal run-in with a mutant desert clan of cannibals, he has joined a dirt biking team, for which he has invented a new brand of turbo fuel. Yeah.

He wants to try and sell the fuel at their next race, but when he discovers it’s located in the same tract of desert where his family was murdered, he has a mental breakdown and decides not to go. He leaves the team in the care of his maybe girlfriend Rachel (Janus Blythe), the now-civilized daughter of the cannibal clan.

This hasn’t happened in quite some time, so it is with considerable relish that I invite you to Meet the Meat: The dirt biking team includes Harry (Peter Frechette), the requisite prankster who kicks it first; Hulk (John Laughlin), who has a bandana and no other distinguishing traits; Jane (Colleen Riley of Deadly Blessing), Harry’s girlfriend who takes a shower; Sue (Penny Johnson) and Foster (Willard Pugh), the Token Black Couple containing the Dude Who Acts Astonished Every Time He Sees Boobs Even Though He’s In A Committed Sexual Relationship And Has Presumably Dealt With Them Before; Roy (the delightful Kevin Spirtas of Friday the 13th Part VII: The New Blood), the team leader whose body really goes with his outfit; and Cass (Tamara Stafford), Roy’s girlfriend, a beautiful blind psychic. Yeah.

This bundle of textbook slasher archetypes (minus Cass, of course) decides to take a shortcut through the desert, as they’re all running late because they forgot it was daylight savings time. Yeah. When they run out of gas, they are fallen upon by surviving cannibal Pluto (Michael Berryman), now led by his uncle, the Reaper (John Bloom). Thus ensues a night of murder, mayhem, dogs having flashbacks, and dirt bike chases through the sandy mountains. As you have probably gathered, this movie is pretty damn weird. While Craven’s supernatural-hewing instincts would lead him to create one of the most immortal horror icons the world has ever seen, this script seems to have been collected from all the crumpled balls of paper that lay scattered beneath his brainstorming desk. Mind you, there’s a lot in this film that Craven can’t be blamed for thanks to its half-finished nature (i.e. Bobby’s abortive inclusion and an extremely murky fate for Rachel, who is knocked unconscious, whereupon the script forgets about her and apparently leaves her to die), but he’s not exactly off the hook.

There’s plenty in this film that just plain isn’t very good. The pacing is maddeningly off-kilter and the main character vanishes for at least half an hour, the dialogue is stale and frequently laughable (i.e. this sick burn, used to taunt the killer out of hiding: “The Reaper sucks!”), and every single aspect of the script feels like an unpolished first draft. Which, in all probability, it was. But that still can’t excuse the frustrating inability to light the African-American cast members at night, allowing their edges to spill off into the inky blackness, leaving only leering Cheshire Cat grins behind.

And don’t even get me started on the score by Jasonsmith Harry Manfredini, who I quite enjoy, but spends his tenure here shamelessly ripping off his own Friday the 13th score. Or the escape plan, which involves lighting a ring of fire and then running through it. Or Pluto’s modernized outfit, which looks like he’s readying for a community theater production of Davy Crockett 2065. 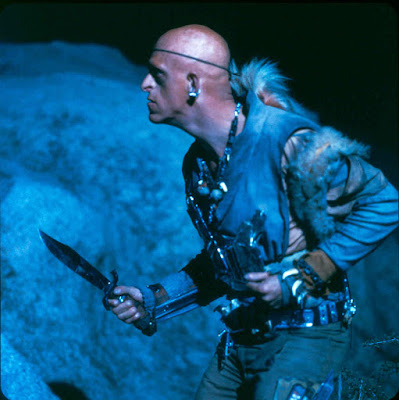 I’m simultaneously relieved and heartbroken they never made Hills Have Eyes III, which was reportedly going to be set in space.

But for all its considerable deficit, The Hills Have Eyes Part II is more than a little fun. It’s tremendously goofy and impossible to take seriously, but coming to it as a slasher connoisseur, it’s a hoot. If you can mentally separate your expectations of Craven from the proceedings, you can kick back and gawk at the cheesy slasher mayhem, dirt biking, the awkward reveal of Cass’s blindness midway through the movie (as we’ll discover, surprise blind characters will turn out to be a kind of motif in the more lunatic Craven entries), and the fact that the dog – Beast – puts up a better offence than the humans do, even pushing Pluto off a cliff like he’s the evil queen in Snow White.

It’s a haggard morsel of a film, but plumped with some classic bad-good nonsense. And there are a handful of crumbs in the film that manage to muster up tension, largely related to the cherry red dungeon of horrors in the basement and the fact that Cass must use every sense but sight to escape her tormenters. And once the body count gets going, it rockets up at a steady clip. So even though it’s malnourished pabulum, at least it’s over quickly.

The Hills Have Eyes Part II has next to nothing to offer the civilized viewer, unless they want a more or less firsthand account of the poisonous effect of desperation and studio tampering on the art form of cinema. But while its position as a cautionary tale is stronger than its entertainment value, there are still some wisps of bizarre joy to be milked from this engine running on fumes. Don’t watch it without removing your brain and placing it on a cool shelf a safe distance from the screen. Or better yet, just don’t watch it.

Killer: Reaper (John Bloom) and Pluto (Michael Berryman)
Final Girl: Cass (Tamara Stafford)
Best Kill: Beast pushes Pluto off a cliff.
Sign of the Times: Foster asserts that it ain’t natural to be in a place without a disco. It’s probably a good thing he didn’t live into the 90’s.
Scariest Moment: Cass discovers the bodies of her friends, but she has to touch them all to “see” them.
Weirdest Moment: Dog flashback! Come on!
Champion Dialogue: “All he does is growl at rocks – his mother must be a thoroughbred cement mix or something.”
Body Count: 7
TL;DR: The Hills Have Eyes Part II is an inept, slapdash cash-in sequel.
Rating: 4/10
Word Count: 1387
Reviews In This Series
The Hills Have Eyes (Craven, 1977)
The Hills Have Eyes Part II (Craven, 1985)
Also sprach Brennan at 11:02 AM