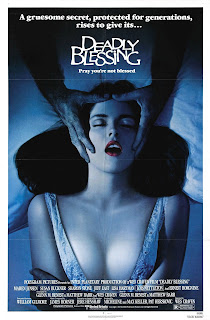 Wes Craven directed four slasher films in the 1980’s. Two of them were forgettable piffle, and one of them changed the genre forever. Really, that’s not a bad track record. But today we’re here to talk about that fourth slasher, a little-discussed 1981 flick called Deadly Blessing.

Deadly Blessing was Craven’s third theatrical outing following the grisly grindhouse duo The Last House on the Left and The Hills Have Eyes, and it finds him flexing a lot of the same muscles he would later use to carve out the more refined Nightmare on Elm Street. Though it is notable mostly as a breeding ground for the more sophisticated ideas he would mull over in the future, Deadly Blessing nevertheless has its share of indelible horror moments. 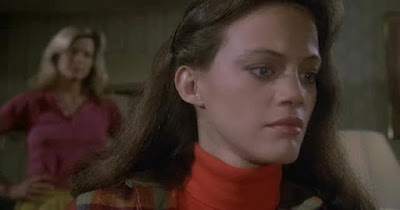 Deadly Blessing regales us with the tale of Martha (Maren Jensen), a young city woman who is celebrating her first anniversary with her husband Jim (Doug Barr of The Unseen) in their country home. Their property is located close to a group of devout Hittites, a religious group that “make[s] the Amish look like swingers,” who have banished Jim from their town for going to college and embracing modern technology. The group is led by this father Isaiah (Ernest Borgnine), who insists that Martha, Jim, and their secular neighbors - Louisa (Lois Nettleton) and her daughter Faith (Lisa Hartman) – have been brought here by the Incubus, a demonic boogeyman he uses to frighten people into following his rules.

After Jim mysteriously perished in the middle of the night, Martha’s friends Vicky (Susan Buckner) and Lana (Sharon Stone of Calendar Girl Murders and, you know, Sharon Stone) come to visit. Before long, the ladies and the Hittites find themselves beset by a shadowy killer. Both assume that the murders are being perpetrated by the opposite group. 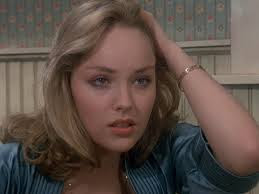 But just like Lost fans, it’s dubious if they’ll ever discover what’s really going on.

The core of Deadly Blessing is 100% grass-fed Craven, from the diad of opposing mirror-image families to the callous and controlling father figure and the repressed truths in a community erupting into violence and terror. In this film, he tackles the organized religion that dominated his sheltered early life and cements in his intent to flush all the skeletons from the closet of the American family. Unfortunately, the halting, stop-and-go pace prevents the film from being thoroughly entertaining, but as an intellectual catalyst it’s superb.

Deadly Blessing teeters on a dangerous precipice between the jagged mountains of insightful fright and the loamy valley of early 80’s mediocrity. For every step up (Craven’s audacious ideas and sterling kill sequences), there is an equal and opposite slip down (low budget TV movie-esque sets, plodding conversational scenes). But we all have our flaws. Hell, I’ve seen Jason X three times. This flick certainly has its share (and damaging ones, at that), but there are a handful of moments so unequivocally stunning that I want to et the negatives out of the way right now before we push on.

First off, man oh man does Ernest Borgnine not give a crap about this movie. He goes through the motions, puffing himself up like an indignant frog, but one gets the sense that his soul has completely vacated his body and is currently 30 feet away at the craft services table deciding between a raspberry of cheese Danish. Then the film is assaulted by an opening narration so cheesy you could melt it and pour it over nachos and a smattering of gaudy effects that would hardly impress in a community theater production. 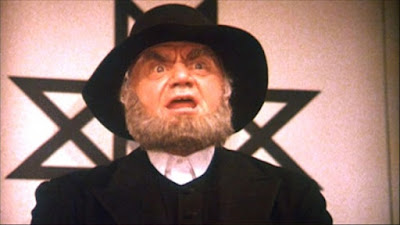 That said, if anybody wants to produce a musical based on the collected works of Wes Craven, I will buy a ticket for opening night.

But for all that Deadly Blessing feels like a low-fi slog, there’s a sinister power that fuels the horror sequences. Craven elegantly frames a chilling nightmare that directly informs his future dream logic aesthetic for Freddy Krueger’s domain, and every death hits with the impact of a cannon blast. Whether it’s the delicate reversal of the sinister William Gluntz (returning Cravenite Michael Berryman) finding a knife sheath on a window sill before being butchered, or a hideously prolonged snake attack in a bathtub, every single moment of terror excels, jam-packed with thrilling switcheroos and hair-raising layers of tension added with each passing moment. One scene in particular, a knock-out, drag–down fight between two women, is the most kinetic, fast-paced, harrowing combat sequence of the year, hands down. With its strict realism and maniacal energy, it wouldn’t be out of place in a kung-fu movie.

Every one of these sequences is remarkably crafted, proving Craven’s acumen for high-wire thrills, but they are scattered at great distances between long swaths of stuffy religious drama. Until the absolutely bonkers final twenty minutes, watching the film is akin to the experience of sitting through a History Channel documentary with shoddy period reenactments, during which random scenes from The Texas Chain Saw Massacre have been spliced in. It’s decidedly off-kilter, but the sheer power of those moments when they finally arrive is worth every politely strained second.

And though the Hittite scenes are a challenge to get through, there is at least a slight reprieve in the form of the three women, whose chemistry is top notch. There are some genuinely sweet undercurrents about the strength of female friendship and each woman has her own distinct, shaded personality. Mind you, it’s not Little Women, but Craven has always had a specialty for strong female characters and eloquently expresses that.

When it comes down to brass tacks, Deadly Blessing is certainly one of the weaker Wes Craven efforts, but there’s enough stimulating material to keep a seasoned viewer invested. If you’re a horror newbie, stick with the Nightmares and the Screams, but for anyone of an irrationally analytical bent, this flick might just answer your prayer.

Killer: [Faith (Lisa Hartman) and Louisa (Lois Nettleton)]
Final Girl: Martha (Maren Jensen)
Best Kill: [Martha is abruptly dragged into Hell by the Incubus who, it turns out, actually exists.]
Sign of the Times: Martha digs up a grave while wearing a fringed patent leather jacket.
Scariest Moment: Sharon Stone has a nightmare about a spider falling into her mouth while a grey-skinned demon caresses her.
Weirdest Moment: Faith says she understands Martha’s grief because her pet bird died once.
Champion Dialogue: “You are a stench in the nostrils of God!”
Body Count: 7; not including a snake beaten with a poker.