We’re halfway there! As I revisit the fourth of the eight films of the Harry Potter franchise, which I have not watched since graduating high school and, subsequently, film school, I have come to an interesting and I daresay valuable midpoint conclusion: Don’t grow up.

Of the first four Harry Potter films, the best of them (which, in my opinion at least, is unambiguously Prisoner of Azkaban) is still a muddled, conflict-free pile of dizzy aesthetic that leaves itself unguarded to quite justifiable attacks about its misuse of inveterate British actors as overqualified set dressing and being easily outshone by its own children’s choir. It’s a sorry lot, to say the least. 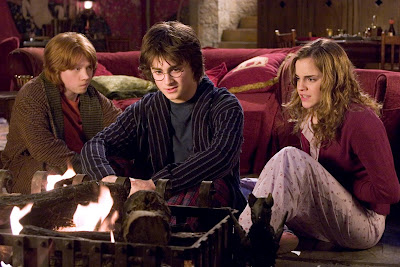 But we shall sally forth and hope that somebody somewhere along the line figures out how the hell to makes British teenagers interesting. You’d think magic would do it, but you would be wrong.

Harry Potter and the Goblet of Fire, in case you’re an emu who found this page open on a safari-er’s lost iPad and have never heard of one of those “book” things, is about the 14-year-old wizard Harry Potter (Daniel Radcliffe). What he really needs to do is get a haircut, but what he does instead is attend the Quidditch World Cup with his BFFs Ron (Rupert Grin) and Hermione (Emma Watson). An attack by Death Eaters – supporters of the Dark Lord Voldemort (Ralph Fiennes, but not until much, much later) – cuts the event short and casts a pall over the kids’ return to Hogwarts School of Witchcraft and Wizardry, quite literally, in fact.

The dominating aesthetic of Goblet of Fire is gloom, and it creeps in around the edges of every frame. Dull blues, searing oranges, and dreary greys loom everywhere you look. It’s a rather striking statement, especially combined with the sudden intimacy of the sets. Cast sizes are smaller, excesses are toned down, and in general it lends to a feeling of the film closing in on you, by far the single most effective cinematic achievement Goblet can boast.

But I digress. This year, Hogwarts is playing host to the Triwizard Tournament, an international championship between the wizarding schools of Durmstrang – a Bulgarian school represented by the champion Viktor Krum (Stanislav Ianevski) -, Beauxbatons  - a French school whose champion is Fleur Delacour (Clémence Poésy) – and Hogwarts – as represented by Cedric Diggory (the pale white, ice cold, impossibly fast and strong Robert Pattinson). This is the first time in many years that the notoriously dangerous tournament has been played, because the Ministry of Magic has figured that, between the rampaging troll three years ago, then those pesky attempted basilisk murders, then the repeated break-ins by a convicted killer, Hogwarts is, like, totally chill now.

Naturally, dark forces set to work almost immediately and Harry is forced against his will to enter the tournament, facing the trio of deadly tasks and set on a path that will, unbeknownst to him, eventually lead to the resurrection of Lord Voldemort himself.

It’s not that much worse than finals, really.

There is a certain challenge inherent in adapting a 700 page book into a film that won’t rupture children’s bladders. I’m aware of that, but Goblet of Fire plows through the plot at a blistering pace. It clips a subplot here, an entire story branch there, mowing down characters and story beats like a mad slasher. Don’t misunderstand me, I’m all for some ruthlessly efficiency editing, but the mad pruning that takes place here has the curiously dissonant effect of simultaneously removing far too much to let any of the scenes breathe, choking out any emotion or wonder, and leaving too many loose ends haphazardly jammed in (merely because they were things that happened in the book), hopelessly bereft of any connective tissue. If you can come up with any justifiable reason for Rita Skeeter, the Quidditch World Cup, or the Yule Ball to be in this movie, you are a far better filmmaker than I. Or Steve Kloves. Oh, and the film is too damn long, but complaining about that at this point s like trying to drain the ocean with a funnel.

As the film is sprinting along through its slapdash parade of half-digested scenes, it’s a miracle that it even finds the time to alight upon something so aesthetically present as the “closing-in gloom” I mentioned above, so it should come as no surprise that Goblet of Fire does absolutely nothing else cinematically surprising for the remainder of its duration. It might be literally too much to expect even anonymous directing from the man behind Prince of Persia: Sands of Time, so I guess we should consider ourselves lucky the film turned out as stylistically responsible as it did. It might be stuffy, awkward, and overlong, but this was 2005 after all. Even the actors’ hair was like that. 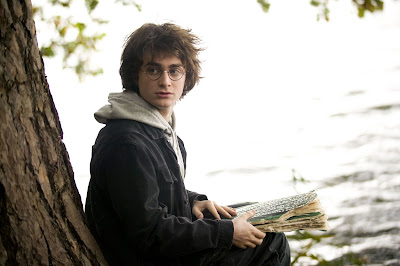 The Hot Topic generation will be the death of us all.

Actually, in many ways Goblet of Fire is very similar to puberty: It’s a bumbling, creaking shift to a more grown-up stage in the Harry Potter franchise, replete with barely understood mood swings, a vague, foggy idea of how girls work, and a supreme lack of humor about itself. Where Azkaban had a sprightly, fun fairy tale quality woven throughout, Goblet of Fire is just plain dour, only saved by two splendid comic scenes performed by Shirley Henderson (Returning as the freewheeling avalanche of self pity that is Moaning Myrtle) and – bizarrely – Alan Rickman, the franchise’s patron saint of pregnant pauses and nasal wickedness.

This pair of performances is two-thirds of a trio that forms the Holy Trinity of Goblet of Fire. For, in the finale, they are joined by Ralph Fiennes, whose Lord Voldemort is a tiger caged in a barely human body; fluid, powerful, and unspeakably evil. His make-up is flawless, his performance doubly so, but he comes too late to repair the deep tissue damage that he film has already suffered at the hands of his co-stars and his scene is marred by perhaps the film’s single worst use of the audience’s knowledge of the novel as a narrative crutch.

About those co-stars: The trio of child actors at the core of the series have been remarkably inconsistent as they’ve been passed from director to director like cheery British hot potatoes, but Goblet might just be their lowest point. Emma Watson’s eyebrows seem to have become sentient, living a completely separate and perfectly happy life atop her head, wriggling about without a care in the world, Daniel Radcliffe jerks about like a wind-up monkey clashing his cymbals together, and Rupert Grint vanishes for long stretches of the film, allowing one to forget that he was there in the first place.

The adults hardly fare better. Michael Gambon in particular is making me look like an idiot for expressing ill-remembered faith in him several reviews ago as he dashes about barking random lines like a child playing with a new toy, and Roger Lloyd Pack (as ministry official Barty Crouch) fills what the slashed script has suddenly rendered an empty characters with twitched wiggling. 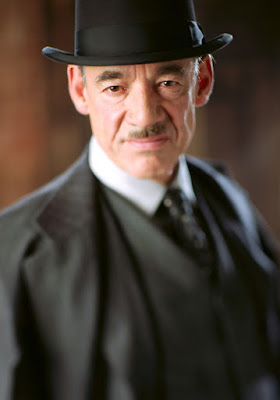 It’s unambiguously unimpressive to say the least, though at least the action sequences are blanketed in the best CGI of the series to date. In fact, a flying scene with Harry and a dragon zipping around the turrets of Hogwarts castle is a spectacularly seamless moment and perhaps the best single sustained effects sequence in the entire first half of the franchise.

All in all, Goblet of Fire isn’t a total wash, and it never ever sinks to the tedious depths of Chris Columbus at his most taxidermic, but it’s an uneven, anonymous movie, and that goes against the grain of everything that Harry Potter needs to be.

Excuse me while I go cry nerd tears, because this one was my favorite book. Until next tie, I’m forever yours in Potterdom. For better or for worse. Usually worse, I’m afraid.