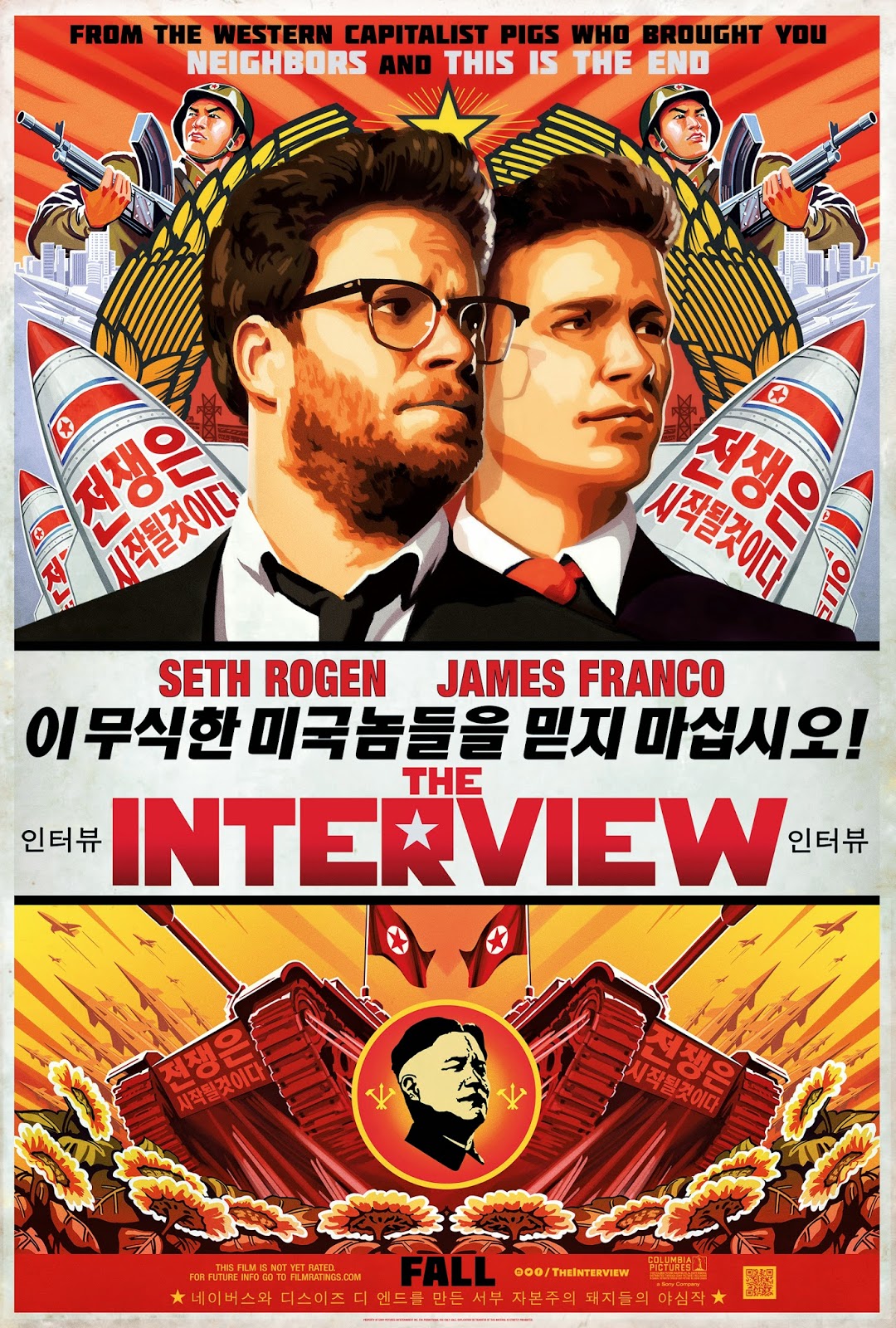 It is at this point obligatory to point out that it's obligatory to point out the controversy surrounding Seth Rogen and Evan Goldberg's new film The Interview. But all this hand-wringing will get us nowhere, so let's get right to it. Sony was hacked and theaters that premiered The Interview on Christmas day were threatened. You can read all about it in my article here.

But after a swift backtrack (possibly having realized that thanks to the media coverage and first amendment-touting American audiences, they would make approximately a kerjillion percent more in box office than if the release were uneventful), Sony gave the film a limited release in a couple hundred indie theaters nationwide and allowed flag-hungry viewers to do their patriotic duty and purchase it via online streaming one day early. Everyone in the media and across the globe seems a little muddled about the ramifications of this decision, especially now that there's considerable evidence that North Korea might not have actually been directly involved. But let's just agree not to take anybody on the entire planet at their word at this point and look at the facts.

The Interview has been released. So far, nothing terrible has happened. And, from the physical evidence of the film itself I can conclusively say that if nuclear tensions arise from this decent but underwhelming comedy, then the world is in even worse shape than I thought. It was not wise of Sony to greenlight a film about the assassination of a currently standing leader, especially one as notoriously three-crayons-short as Kim Jong-un. Nor was it wise to release it on Christmas because seriously, who is programming these Christmas releases this year? American Sniper? Unbroken? I'm gagging on the gritty bioptastic jingoism.

But The Interview is a lark. It's just another frat comedy, using the background of a derelict regime to lend gravitas and irony to the parade of dick jokes. 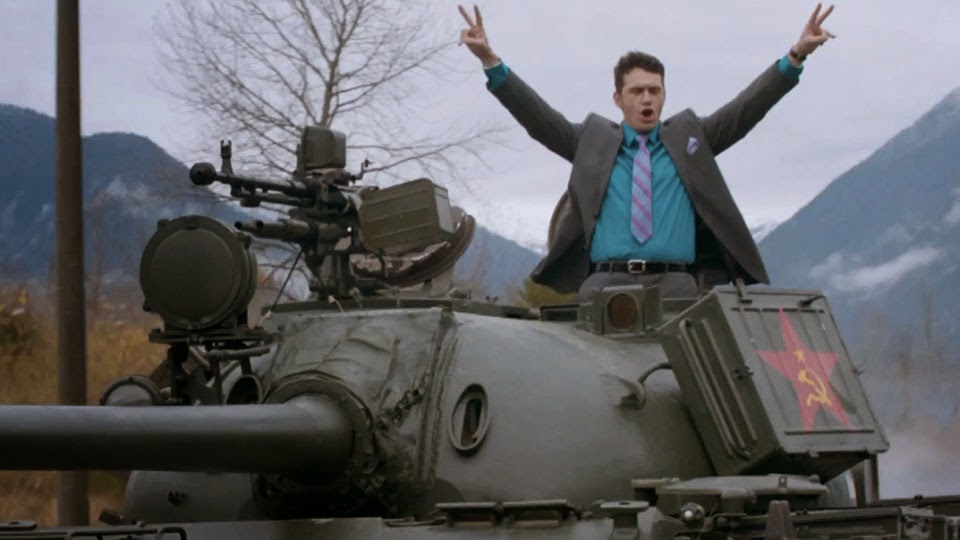 In the measuring contest, the tank wins by a landslide.

As just about everyone in the solar system knows at this point, The Interview is about entertainment "journalist" Dave Skylark (James Franco) and his producer Aaron Rapaport (Seth Rogen), who are asked to assassinate North Korean dictator Kim Jong-un (Randall Park) when they score an exclusive interview with him. The two best buds see this as a way of pushing their careers forward, but when Kim and Dave form a fast friendship and Aaron falls head-over-heels for Sook (Diana Bang), a sexy propagandist, things get complicated.

And by "complicated," I mean "North Korean boner jokes." But I don't mean to devalue the film in its entirety. There are some genuinely decent moments of comedy and - it must be said - the dick jokes can be pretty great. As is to be expected by anyone who has been awake in the Anglosphere for more than five minutes, there are moments that tip into the less sensitive end of the spectrum, but the whiffs of misogyny, racism, and homophobia are not strong enough to be truly poisonous.

This is literally all we can ask in a movie where every female character (of which there are a mere two) is immediately treated as a source of erotic pleasure, even if they're in a position of power - say, a CIA agent or a high-ranking official of a militaristic dictatorship. Here's a little experiment - next time you have a female judge at a hearing (although - since you are reading this blog - I am certain that you are a peace-loving, law-abiding, respectable individual and won't find yourself in this situation), wolf whistle as loud as you can and follow that up with a nice "va-va-voom" or two. See where that gets you and send me a note in the comments. 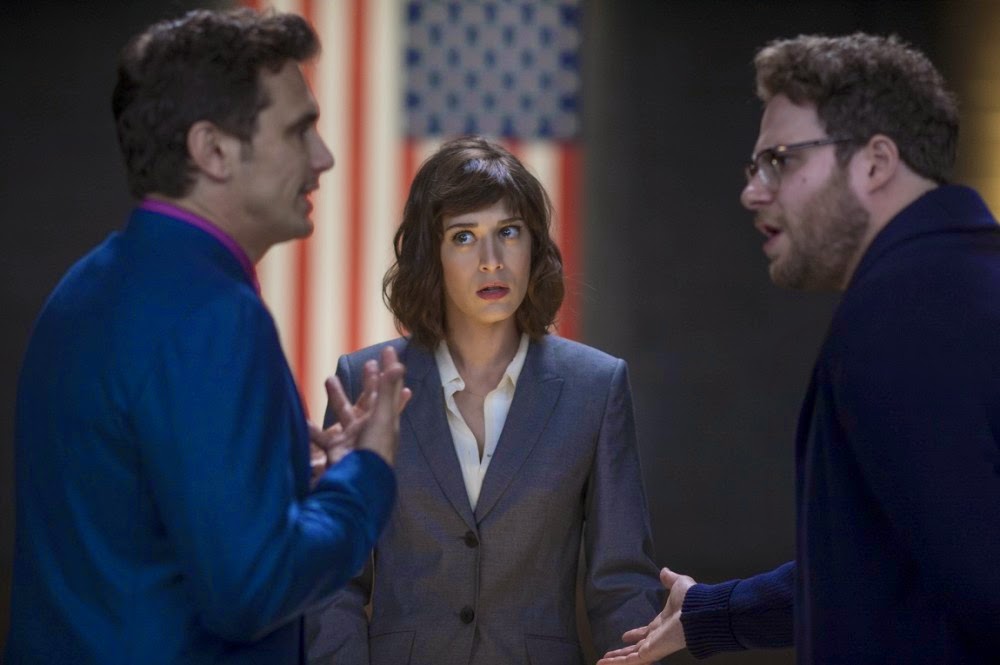 There are plenty of fun, non-execrable comic moments, especially in the first half hour (in which the film focuses more or less exclusively on incisive pop culture riffs rather than uneven political satire), but none will have you carted off to the E. R. for a busted gut. And they begin to peter out once the duo actually arrives in North Korea, which isn't as thoroughly represented as it could have been, either through shyness or lack of current information. Although the destitution of the country is mentioned many times, it is almost never seen. In a way it makes sense - it's easier to understand why Skylark would have trouble seeing the problem, and this is a comedy - not a documentary. But if we're going the political route, which a movie like this inevitably can't avoid, why not go all in?

This sort of gradual wearing out as the film goes along is present in the aesthetics as well as the comedy. In fact, the very first moments of the film are its absolute best, using color theory, framing, composition, and juxtaposition to establish the bleak atmosphere of North Korea as well as the fact that Dave Skylark is an ill-informed man-child whose program can't hold up to the likes of hard news. This is all accomplished swiftly and efficiently in the opening minute and a half, a level of cinematic prowess that swiftly vanishes, like the very last of our Christmas cookies before I woke up this morning, damn it!

But despite its drawn-out decline, The Interview is never less than pleasant, though it evaporates from the tongue as soon as it's tasted. Riding as it does on the backs of a gaggle of strong performances, it may be wobbly but it never falls down. James Franco isn't far from his usual schtick, but his act of character creation is more than meets the eye, with subtle, ingrained tackiness that draws some big laughs. Seth Rogen is consistent as always, but Randall Park and Lizzy Caplan (as the sexy Agent Lacey) are the real standouts in this parade of malfeasance. 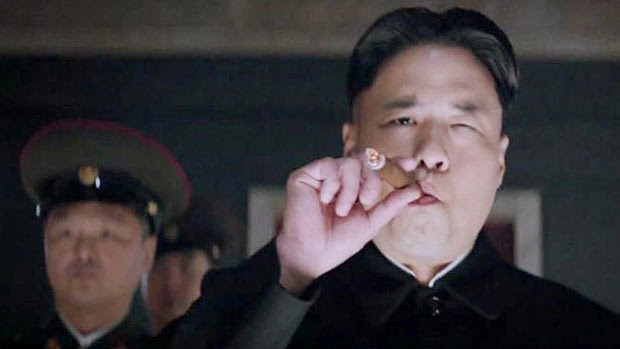 I have sung Park's praises again and again, but he outdoes himself as the little-seen despot, finding outrageous humor in Kim Jong-un's stunted personality, but simultaneously harnessing a raw power that breaks through his cuddly teddy bear persona and makes him a character to truly fear. Any actor could have coasted on the realities of the dictator's presence in the audience's subconscious, but Park goes above and beyond to menace and create a subtle, cunning villain that elevates the cheery comedy into something even remotely meaningful.

And although Lizzy Caplan's character is nothing but a flesh shell with a great rack, she brings a warmth and humanity to the role, grounding even the most ridiculous one-liners into a realistically human character despite her remarkably minuscule screen time. Without these four performers, The Interview would collapse like a despotic regime after the removal of its leader.

All in all, The Interview is a decent way to kill an hour and a half, but it's nothing to write home about. It's especially nothing to write to North Korea about. Its ill-handled release is a source of great turmoil in the industry at the moment, but as the waters settle, let's allow this film to become a footnote rather than define the moviegoing experience of 2014. It's really not memorable enough to deserve much more than that.

If you take one thing away from this movie, please let it be that Randall Park deserves more starring roles. Make it happen, America.

TL;DR: The Interview is a forgettable bro comedy driven by several terrific performances.
Rating: 6/10
Should I Spend Money On This? That's your call. If you want to do your part for 'Murca, you can rest assured that you'll be pretty safe in doing so. If you want to skip it, you won't miss much.
Word Count: 1312
Also sprach Brennan at 10:48 AM