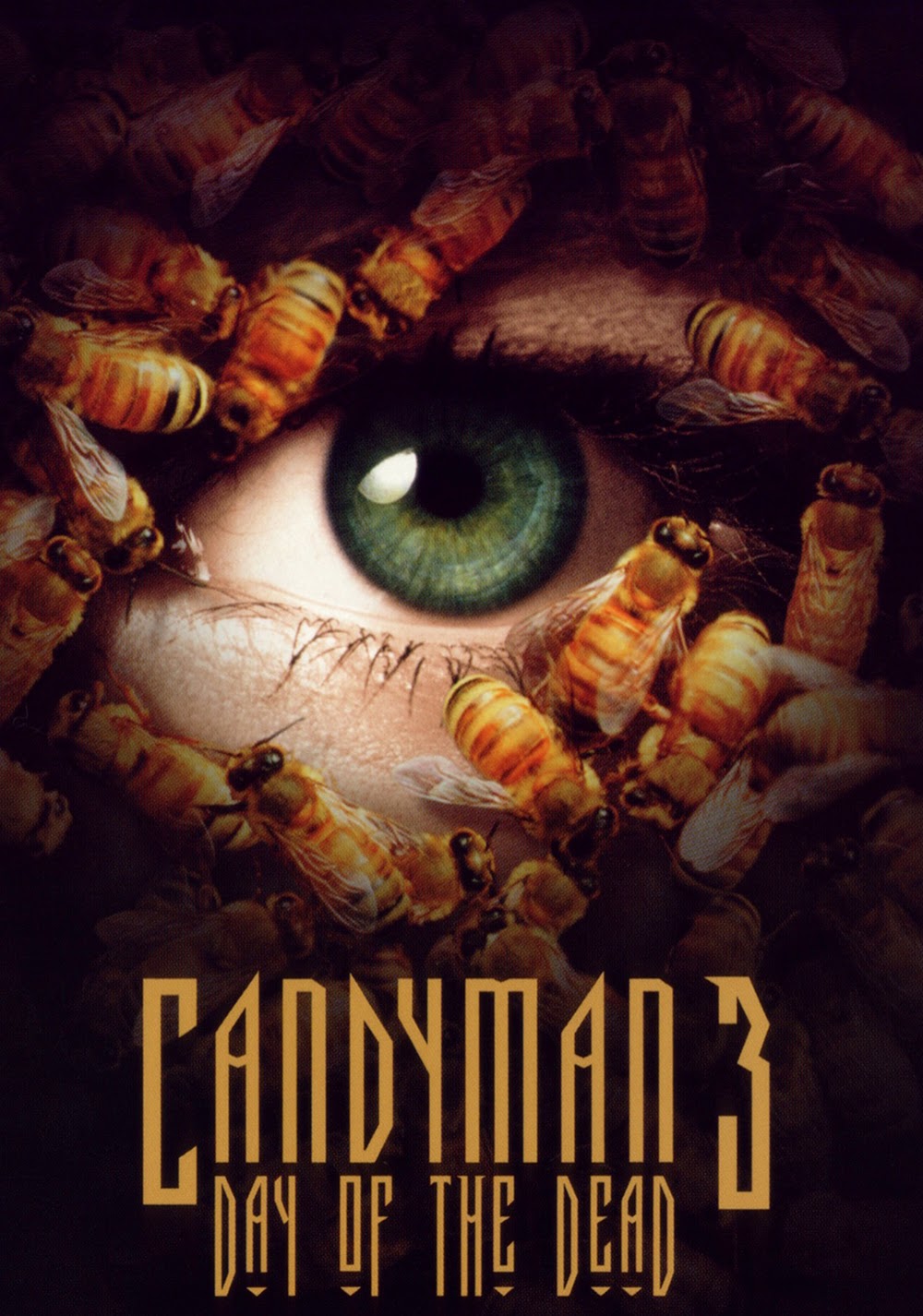 Friday the 13th was a crappy slasher film that captured a zeitgeist and spawned nine sequels, a crossover, a remake, a television series, a video game, and several literary and comic book adaptations. The Howling was a crappy werewolf movie that launched a franchise of eight films as well as three novelizations. Candyman was a terrifically scary, intelligent modern slasher update that incorporated elements of urban legend with the real-life terror of failed urban project Cabrini-Green that got two sequels and bupkis. Art is dead.

But hey! At least that means that this one was an easy marathon. Sergio and I recently finished up Candyman 3: Day of the Dead, and let me just say that this trilogy was an interesting ride. Obviously the sequel, the muddled Candyman 2: Farewell to the Flesh was not going to be quite as good, but I was unprepared for how much more entertaining the final, direct-to-video sequel was going to be.

Now obviously, Day of the Dead has some budget issues. And in terms of production quality and acting talent, it's a real step down. But the story is so comparatively polished and coherent that it's far more enjoyable. It's like the difference between a Broadway production of Shrek: The Musical and a kindergarten performance of Little Shop of Horrors. Sure, one has more professional talent on the stage, but which will you enjoy more? 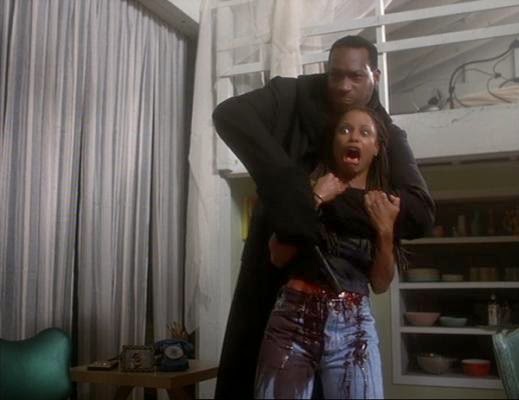 No ironic answers. I know who you are.

Day of the Dead follows more clearly in the footsteps of the first film ("Be my victim"; murdering all of someone's reasons to live; etc.), though it caps off storylines left open-ended in the second (Annie Tarrant's survival and pregnancy), which kind of makes it the perfect sequel. It's the little things that bring me joy. Anyway, this film focuses on the daughter of the last film's survivor, all growed up - which, according to my calculations makes this film set sometime in late 2016. I wonder what force propels us to return to some of those repulsive 90's fashions. Retro will be the death of us all.

She just wants the world to appreciate him for what he was in life - a talented painter with a passionate soul - but her art curator friend Miguel (Mark Adair-Rios) uses his twisted reputation as a gimmick to get warm bodies in his gallery. Unfortunately, warm bodies are all Candyman needs. After Miguel peer pressures Caroline into invoking Candyman in the mirror, he and a ladyfriend die. And the only suspect is his friend David de la Paz (Nick Corri of A Nightmare on Elm Street), who Caroline ropes into helping her investigate the murders and the robbery of Candyman's gallery.

Pursued by the Candyman on one end and the topically racist cop Sam Kraft (Wade Williams) - who wants to pin the murders on David - on the other, they embark upon a deadly adventure through the streets of Los Angeles during the annual Day of the Dead celebrations.

Which, thanks to the budget, largely consist of colorful streamers and imagination.

You may have picked up on a preponderance of Latino names and themes in the previous description. And to that I say, you are a remarkably astute individual. Thank you for being a discerning human being and reading my blog. Yes, this film takes place largely in the Latino districts of East L.A. and treats the culture with remarkable respect for a direct-to-video horror film written by the guys behind The Vampire Diaries. Although the Day of the Dead is more poorly integrated with the film proper than Part 2's Mardi Gras celebrations, it provides a vibrant backdrop for a story much more concerned with the hardships and trials of urban life than one could have reasonably expected, considering its pedigree.

Now, I don't want to sound like I'm touting Candyman 3 as a masterwork of unadulterated genius, because it's adamantly not. But the ways in which it is not a piece of crap astound the mind of this jaded reviewer, despite the myriad of crappy elements clogging up the wings. Even the best DTV affair is still going to be a stunted and withered little thing, but this one is easier to pity and get along with.

Sure, D'Errico's sub-porn acting is so thorough that she even fails to convincingly smoke a cigarette. Sure, the film is keyed far more towards exploitation: nearly every female actress doffs her top, including the one playing the dead mom, and we're treated to a flashback sex scene with the killer because Tony Todd is co-producer on this one and he wanted to see some boobs, damn it. The faux-Philip Glass score with the peculiar Ren Fair flute, the swarm of bees that look like they were animated on Flash, the cops that wear normal civilian clothes and drive normal civilian cars but have jackets that say "POLICE," and a dream sequence featuring the famous L.A. Underground (for those of who aren't regional, this is not a thing) are not what we in the know call quality filmmaking.

But the crappy elements give the film a three-legged dog type appeal. Sure, it's not the best at its job, but you can tell it's trying and you love it for that. 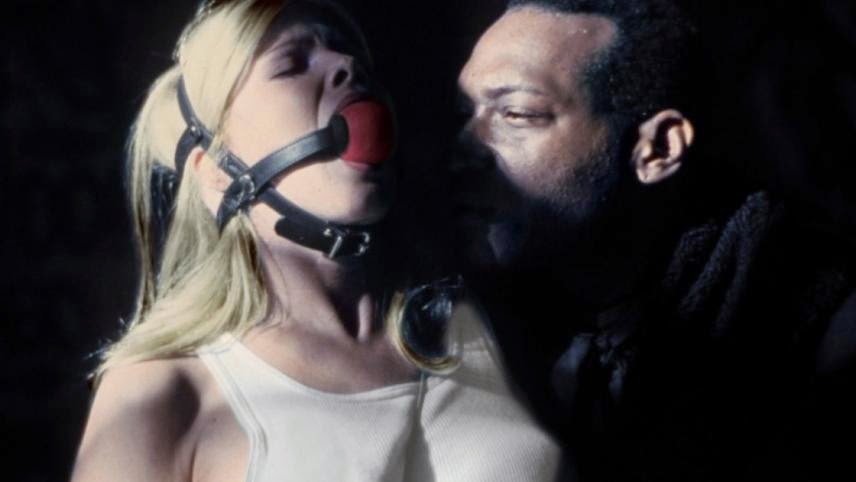 Sometimes trying too hard, but you've gotta love it for that too.

Plus there's no peyote-fueled Mardi Gras radio narrator in sight, so that's automatically a step up from its forefather. Everything else is merely window dressing. But when that window dressing is as solidly politically-minded (white cops vs. urban neighborhoods - not exactly a closed book in 2014), dedicated (I never thought I'd see a two-parts-later sequel actually pick up on a main thematic through line of the original), and handsome (Nick Corri) as Candyman 3's, it's a good time for everyone.

And though its tension is mostly anemic, there are some decent scare sequences, especially a moment involving a cracked egg (not nonsense, actually - eggs are very significant in spiritual rituals) and some surprisingly wet gore sequences. To be fair, bee horror hits me the hardest, suffering as I do from documented apiphobia, but the film is halfway decent enough that I'm not embarrassed to admit being affected by it.

All in all, Candyman 3: Day of the Dead is never going to be first pick on movie night. It's not the film you'll want on your cinematic kickball team if you're the captain. But as a Candyman fan, it's a real treat to have a sequel that isn't a disorganized, barely connected wisp. Check it out if you're so inclined.

TL;DR: Candyman 3: Day of the Dead is far better than it has any right to be, but as a direct-to-video sequel to a slasher sequel, it's not that great to begin with.
Rating: 5/10
Body Count: 10; not counting Candyman because even though there's not a fourth film, we can't just go ahead and assume that the killer is gone for good.
Word Count: 1334
Reviews In This Series
Candyman (Rose, 1992)
Candyman 2: Farewell to the Flesh (Condon, 1995)
Candyman 3: Day of the Dead (Meyer, 1999)
Also sprach Brennan at 12:10 PM