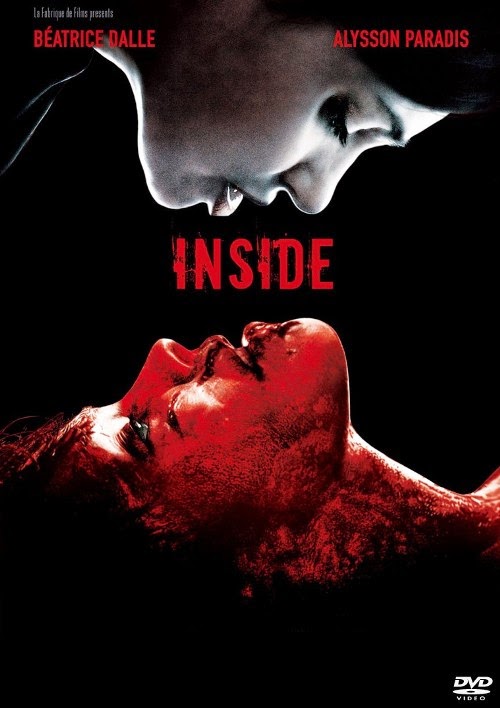 Because Sergio is awesome, he knew that a French horror film would be a great Christmas gift for Yours Truly, but he had no idea how serendipitous the decision to toss Inside into the package was. You see, the movie is set on Christmas Eve! What a world. So please, sit down, and enjoy my first horror-tinged offering for the holiday season.

Inside (aka À l'intérieur) is a late example of the French Extremism genre, a group of turn-of-the-century films that operate on the foundation of large scale gore and body trauma. However, like its sister films Martyrs and Haute tension, Inside is not without a solid emotional core and has high-caliber filmmaking at its disposal. It's like ever since the New Wave in the 1960's, France's filmmakers mutually decided that they should be better than everybody else at anything they ever did from then on. 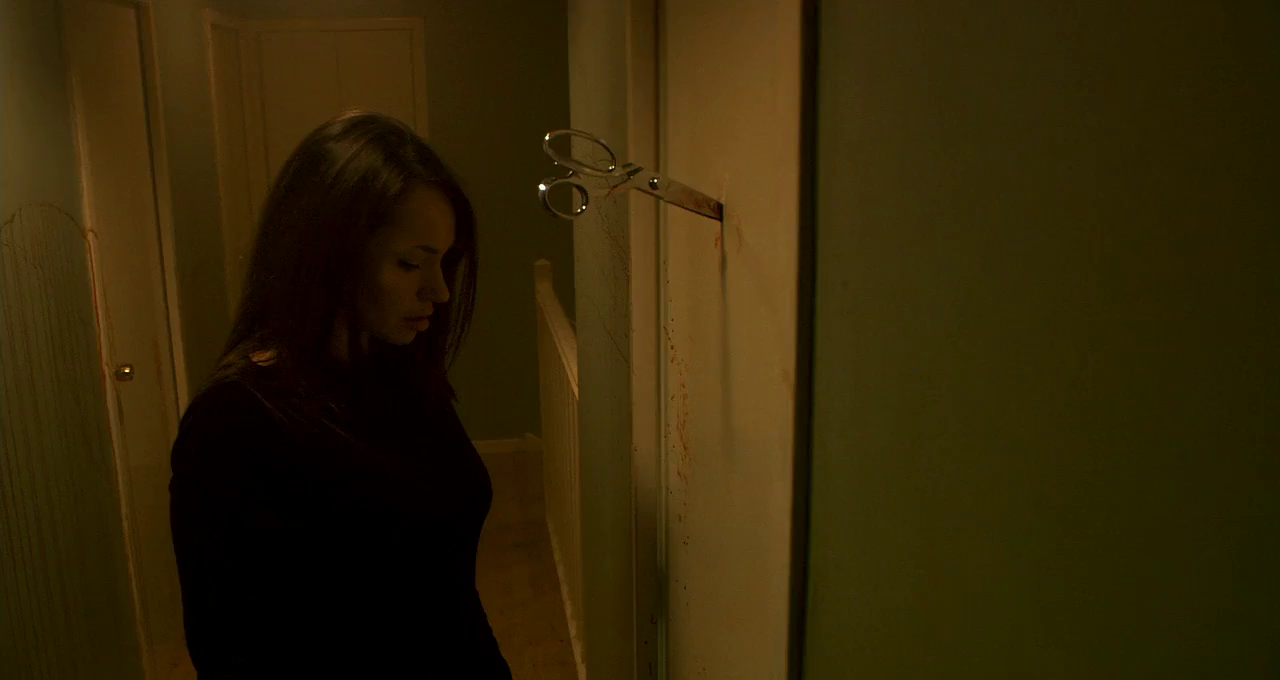 It's true that the story and characters are shallow in relation to the deep pool of gore present in the film. It's true that the overlarge cast of players on hand to provide said gore trip up the pacing and believability, especially in the second act. It's true that the film opens on its worst moment - an off-putting CGI approximation of a fetus in a womb. But Inside is crafted with such skill that the flaws don't even register when it takes you on its thrill ride.

Inside is a film about - you guessed it - the insides of things. Its lead character, Sarah (Alysson Paradis), is nine months pregnant and many moments are viewed from her baby's perspective. Inside her womb. Her husband died in a car crash and she is struggling to suppress her grief. Inside her mind. When trouble is a foot, she locks herself away. Inside her bathroom. And when a mysterious woman (Béatrice Dalle) appears the night before the baby is due, she seems dead set on making sure that Sarah's insides become her outsides.

The plot is simple. Sarah wants to survive. The woman that has slipped into her home uninvited wants to stab the crap out of her and scoop out that baby if she can. Family members, coworkers, and policemen may come and go (mostly violently) from the house, but nothing will stop her from pursuing her bloodthirsty quest. 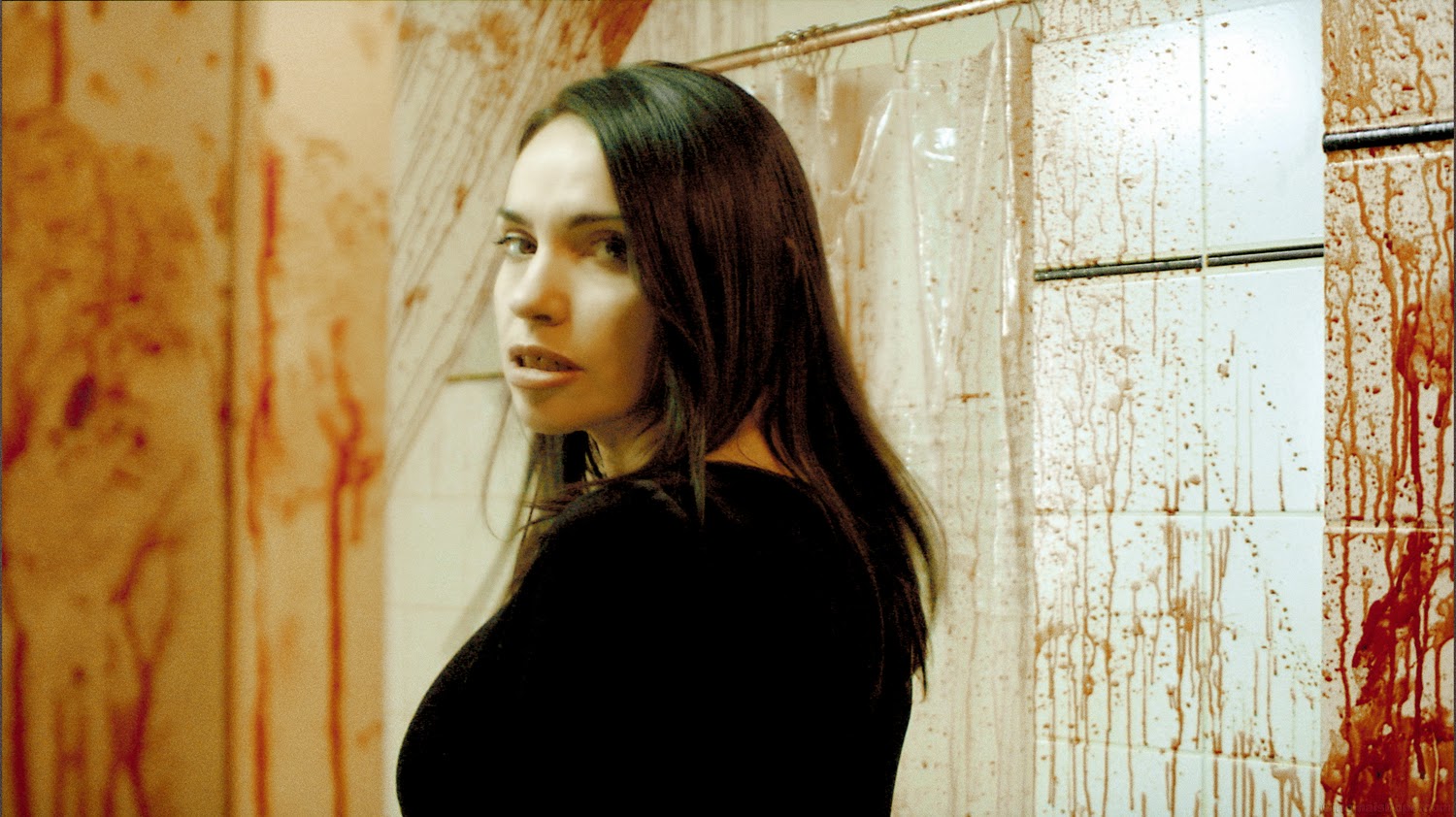 She also moonlights as an interior decorator.

One of the most important elements in Inside is its strong female presence. We can hem and we can haw about the societal construction of gender and that our biological sex doesn't define us. This is all valid and this is all true. But the fact remains that childbirth is the sole domain of the biologically female, and that intimate, inimitable blood link between a mother and her child is the taut rope that the rest of the film hangs on. Both protagonist and antagonist are connected with this link in one way or another and are prepared to fight for it by the skin of their teeth.

As their game of cat-and-mouse continues throughout the film, the fountain of blood and grue satisfies the gorehounds in the audience (and if you're not one, beware) but it also forges a vast web of powerful symbolism. Also it's frickin' awesome, but I'm pretending to be professional over here. There's waterfalls of blood in this film, coming from just about every implement and direction the comfortably macabre mind can imagine. There's probably more blood in Inside than is contained in the bodies of every person in France combined.

The gore is exquisitely crafted, the cinematography is dusky and pristine, and the score shifts effortlessly from lush, swelling romanticism to staccato aural assaults. The middle third has a tad too many characters shuffling in and out like a grim-faced Noises Off, and the characters exhibit universally lousy decision-making, but it's all in service of an exuberant non-stop thrill ride that frightens just as well as it shocks and titillates. 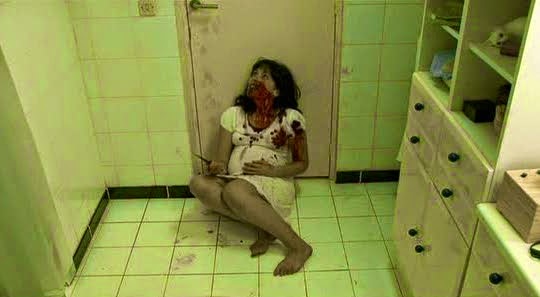 The film is fraught with tension and the interplay between the taut editing and moody cinematography dredge out every chill from your spine. But the overwhelming sense one gets from the film is just how woefully pretty it is. Even a shot of glass cracking is imbued with an otherworldly sheen that aesthetically pleases as much as it psychologically torments.

And the costume design! Oh, the costume design! The madwoman is cloaked in a billowing black dress that calls to mind the Angel of Death, swooping and flowing with her every movement and counterbalancing her bold brutality with delicate, airy movement. It's the single most perfectly simple costume I've ever seen in a feature film.

And I've gone off on the dress again. Perhaps it's time to wrap this up. Inside is one of those indelibly French films that plucks at the audience's strings like a finely tuned harp. It's fresh, fearless, gleefully grim, and absolutely a blast. It's creepy, gooey, gorgeous, and just about everything that makes a horror fan squeal.

The tone is a bit bleak, the characters are a bit shallow, and the CGI fetus checks in from time to time to remind everyone exactly how weird it looks, but overall, Inside is an unforgettable piece of bloody good cinema with a ropy, dynamic pace and expertly crafted mayhem.