Welcome to Fright Flashback, where every week until the end of summer we will revisit an older horror film that is in some way a spiritual precursor to an upcoming new release. This week, we are anticipating Let's Be Cops, an alright-looking comedy about the two dudes from New Girl dressing up as cops and wreaking havoc about town. Today we'll explore a more evil film exploring the same premise, the 1988 slasher Maniac Cop. 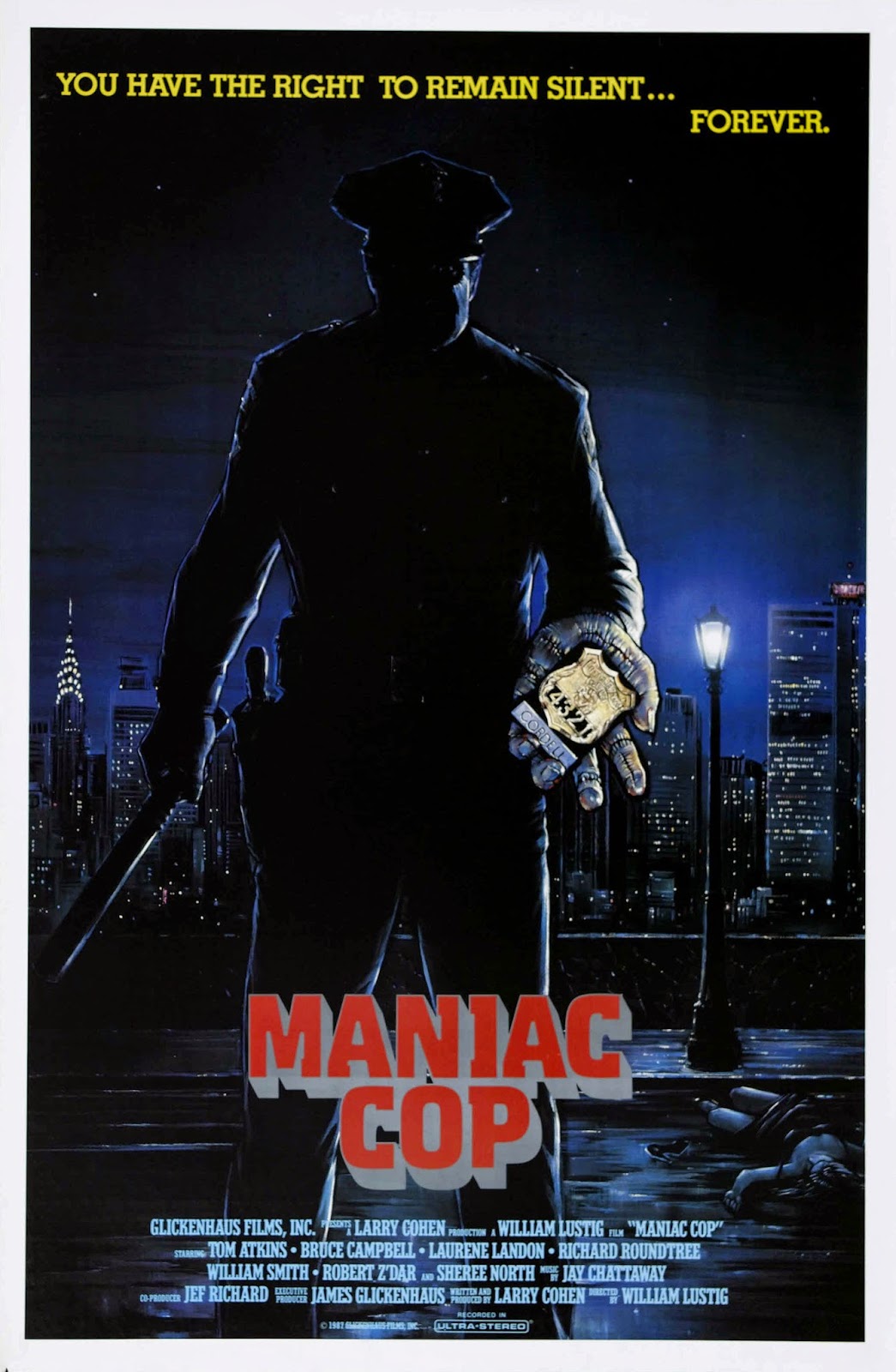 Writer/producer Larry Cohen was behind some of the most beloved cult classics of the 80's, including It's Alive, The Stuff, and Q, The Winged Serpent. I am ashamed to say that I have seen none of these. In fact, the only work of his I'd seen before yesterday was the 1996 DTV Fourth of July venture Uncle Sam. Obviously, I have some deep issues to correct with my movie-watching, but there's hardly a better place to start than his first collaboration with director William Lustig, of the uniquely under-appreciated Maniac (I like him, but the man's not terribly creative when it comes to naming movies, is he?).

This film shows an even deeper, more thematic portrayal of the New York City underworld than Maniac, although thanks to its release date eight years later (after the rise and fall of the slasher genre) it doesn't quite have the same visceral impact. What is does have, however, is Cohen, who gamely brings to the table a sense of knowing exactly how to please the B-picture audience even without high-impact gore. 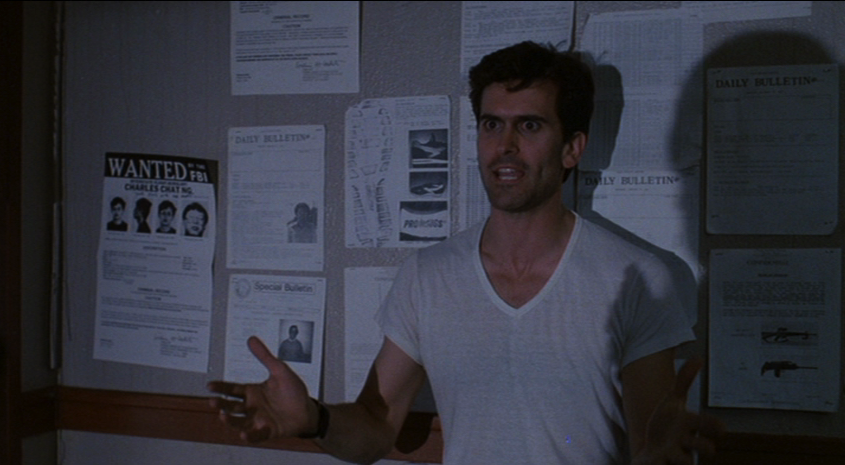 Bruce Campbell in a white V-neck is one of those ways.

Maniac Cop tells the story of Lieutenant McCrae (Tom Atkins), a wizened cop who's tracking a killing spree supposedly perpetrated by a man in uniform. After the force detains the young Officer Jack Forrest (Bruce Campbell) following the murder of his wife - which occured moments after she caught him in bed with vice officer Theresa Mallory (Laurene Landon) - they think they case is more closed than a Blockbuster, but McCrae isn't so sure.

Neither are we, since the killer wears a name badge reading "Cordell" in the title sequence. Thus begins a race against the clock as McCrae and Theresa search for the legendary Officer Matt Cordell (Robert Z'Dar), who supposedly died years ago, and clear Jack's name.

That plot doesn't sound too much like a slasher movie. And Maniac Cop doesn't feel too much like a slasher movie. It absolutely is, considering its body count and its first act (in which two scenes repeat endlessly - civilian gets killed, cops discuss, lather, rinse, repeat), but it aspires to be much more than that, throwing in elements of crime procedural and hardboiled detective mystery (the mystery more pertains to how and why the killings are occurring rather than who is performing them - again, the name tag kinda deflates the suspense there). 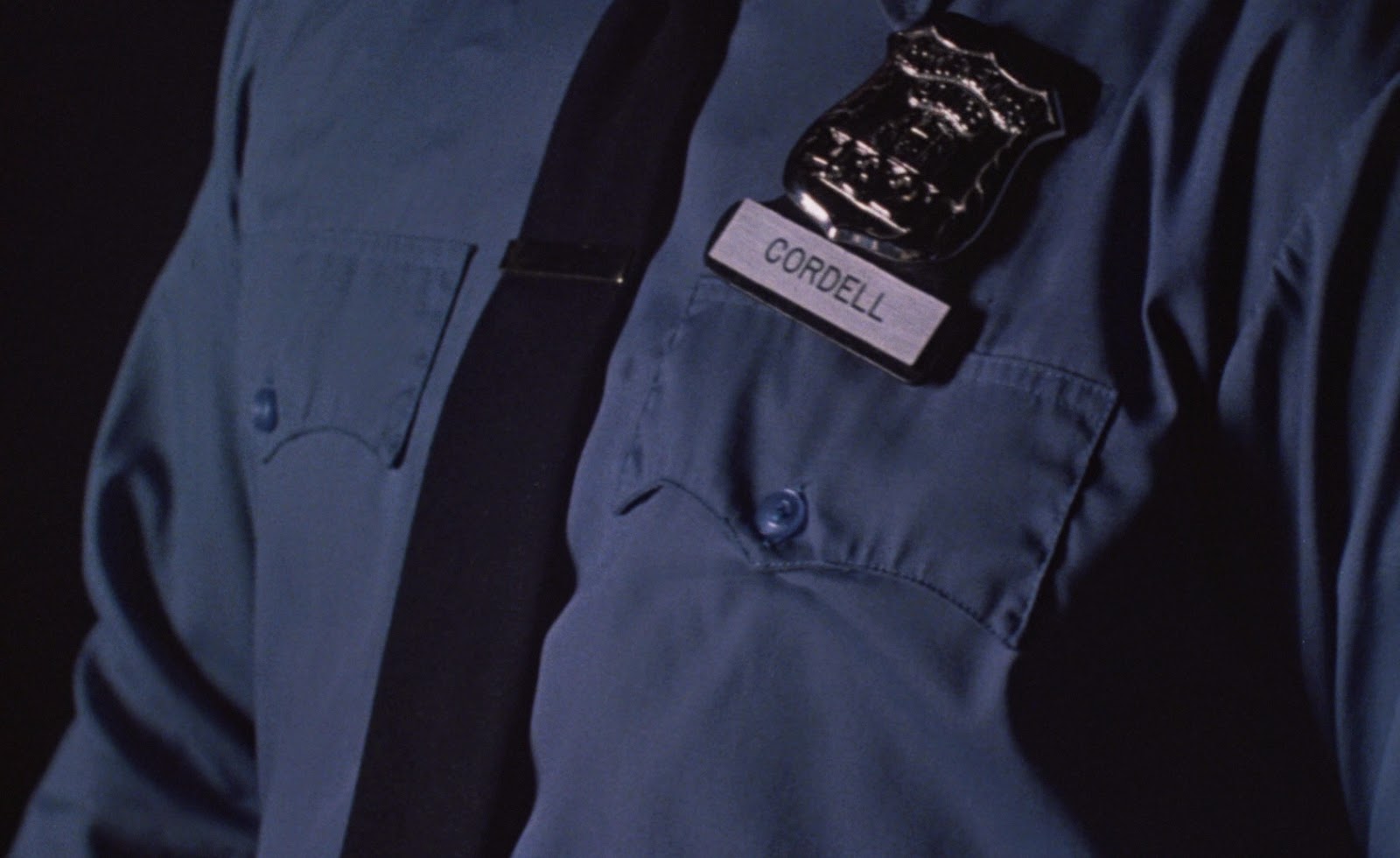 Seriously, I'm not kidding. It's practically the first frame of the movie.

While it's not exactly what one would expect from a movie called Maniac Cop (for crying out loud), the mystery is engaging and the subtextual material hits a nerve. The killer is taking advantage of the public's trust of men in uniform, luring them into a false sense of security before he exterminates them. It really makes you think about the fact that law enforcement officials are real people. People with guns, fighting skills, and motives entirely hidden from us.

This isn't to say that one shouldn't trust the police or that law enforcement is inherently bad, but it plays on very real fears about the nature of violence and trust. How do we know that this stranger really has the best intentions for us? We don't. Unfortunately, this thematic material is mostly lost in the second half, but when it is present, it is sharp and unsettling to the extreme. 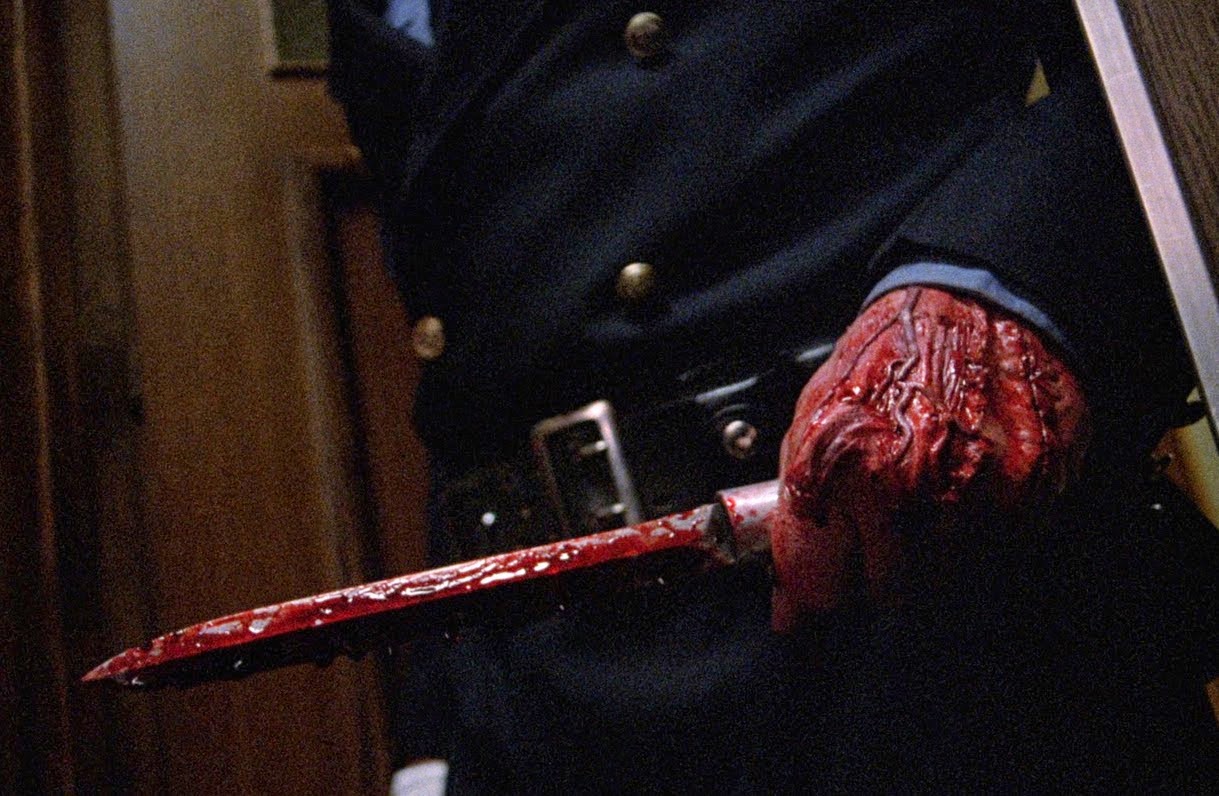 By all means, Maniac Cop should be dreadfully dull, as most low budget procedurals tend to be. The cool slasher killings die down after the opening half hour and never return, replaced by offscreen massacres and indecipherably edited violence. Compound that with Campbell's absence for almost the entirety of the second act and any other movie would have stopped dead in its tracks.

But this movie, being in the hands its in, takes those blows and survives. Larry Cohen provides the film with some great one-liners and B-movie appeal, creating a loopy tone that the actors pick up on with no problem. A favorite of mine is William Smith (also of Memorial Valley Massacre) as Captain Ripley, a perpetually-sunglassed man with a gravelly voice who is able to thoroughly digest the scenery because he chews it so well. Then of course there's the obvious choices - Bruce Campbell and Tom Atkins don't disappoint - but Landon holds her own, relishing every vowel she gets to spit out.

And Lustig's direction, while not exactly groundbreaking, does more than it needs to with the material, providing shot compositions that give the film a bit more gravitas than it would with any old hack. It is an unusual slasher film in that there is more than one shot that is actually memorable in the entire affair. And a flashback attack in a prison shower is an inspired riff on Psycho. Also I would be loathe not to mention a great scene copied almost beat for beat in Scream, in which a girl uses her windshield wipers to try to clean off blood. The more 80's movies watch, the more I can piece together Kevin Williamson's DVD collection. 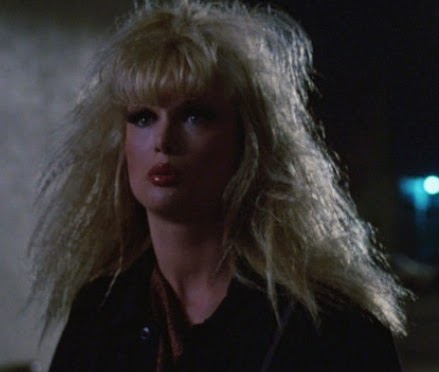 Unfortunately, this hairstyle was not an inspiration for Scream.

In addition to its solid visual and tonal foundation, Maniac Cop has one more element to recommend it - an astonishingly progressive treatment of its female characters. The first victim is, of course, a woman walking home alone at night, but before she runs afoul of the business end of a maniac cop, she singlehandedly fights off two muggers with her purse. We also see a powerful woman in the media make a splash, not to mention that the heroine is "the other woman," a character usually beset with foul stereotypes.

One of the benefits of steering clear of the slasher model is that the inherent misogyny in the formula is nearly eradicated. So there's more than enough good in Maniac Cop to compensate for some of the more egregious missteps. And there isn't any space for the duller moments thanks to the zippy run time. There's dozens of slashers I'd pop in before this one, but if you're looking for a more obscure good time, maybe give this one a whirl.

Killer: Matt Cordell (Robert Z'Dar)
Final Girl: Theresa Mallory (Laurene Landon) feat. Jack Forrest (Bruce Campbell)
Best Kill: A man has his face pressed into wet concrete, which dries overnight.
Sign of the Times: The coroner is buried under one of the most heart-wrecnching mullets of all time; someone makes a comment about the killing spree being "bigger than AIDS."

Scariest Moment: The attack scene in the shower is electrifying.
Weirdest Moment: A couple decides to make out because a red light is taking too long.
Champion Dialogue: "This isn't about romance. It's about murder."
Body Count: 17; not including an offscreen victim reported in the paper, two policemen mentioned but not seen in the station massacre, or the mayor who dies in the extended cut.
TL;DR: Maniac Cop is a little uneven, but is one of the better crime procedural slashers with some good B-movie charm.
Rating: 7/10