Census Bloodbath: In A Vancouver Minute 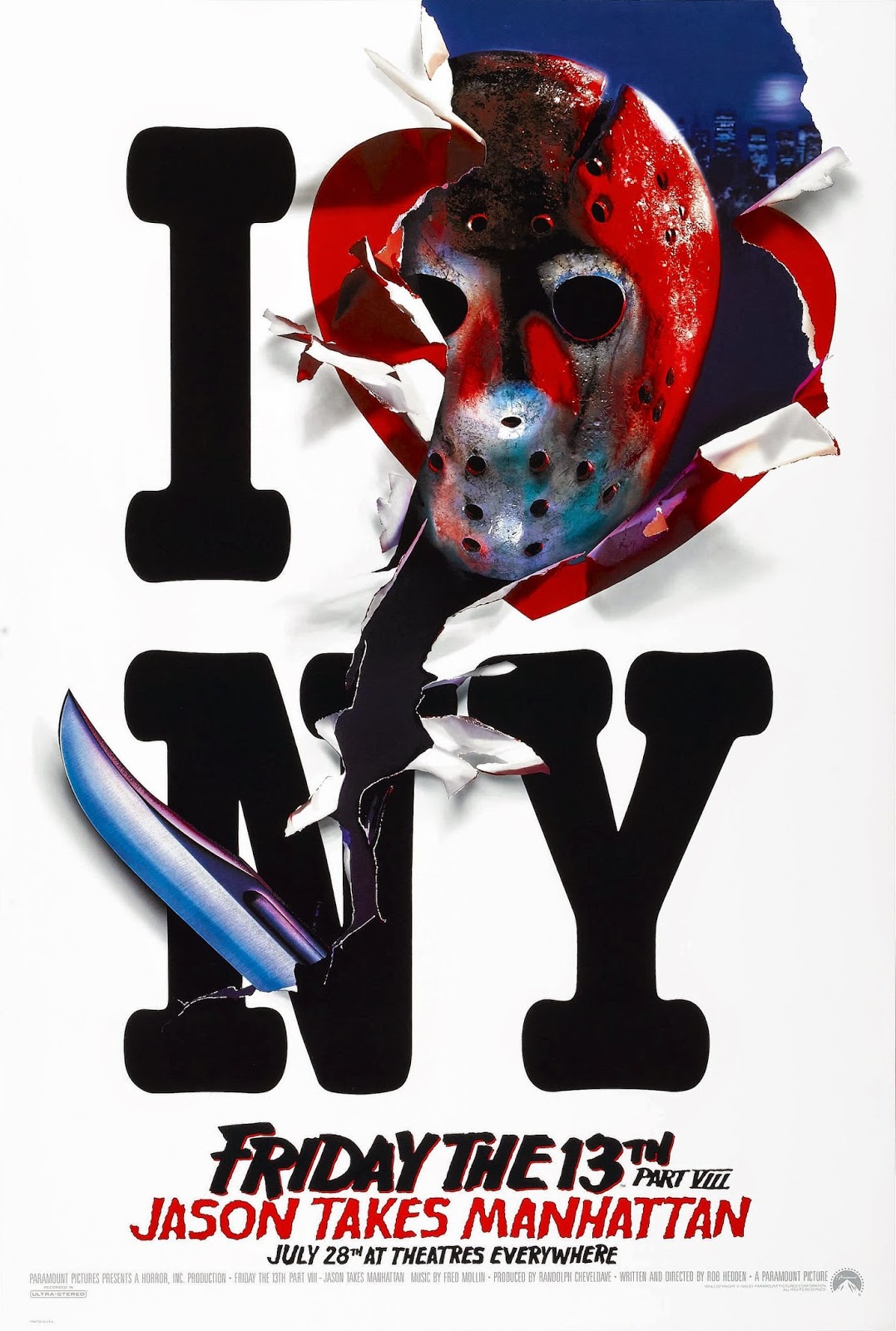 We just hit the first anniversary of the Census Bloodbath project a couple days ago and I see no better way to celebrate that milestone than the last Jason Voorhees picture of the decade, Friday the 13th Part VIII: Jason Takes Manhattan.

Although it could be quite easily argued that the slasher genre had run out of steam long before the 80's gave way to the moist, grungy decade that followed, the franchise pictures of 1989 provide incontrovertible proof that the once teeming pond had been polluted beyond all hope. Jason Takes Manhattan was the first of these by a hair and though it is not the worst, it is a great example of the pictures that populated the slasher's long, drawn-out death rattle.

The MPAA had long since exerted its dominance but continued to bully the genre, slicing off more gore than poor Jason could have done in a thousand lifetimes. The well of good storylines was dry as a bone and only the threadbare enthusiasm of the franchise fans kept the corpses of Freddy, Jason, and Michael shambling along.

In fact, after Part VIII tanked, Paramount took Friday the 13th out back and shot it in the head, selling it to Paramount, who wouldn't do anything with the property for years to come until they decided to lay it to rest with the Lovecraftian oddity Jason Goes to Hell: The Final Friday. 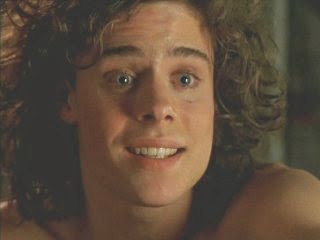 And the actors' hair was beginning to dwarf the profits. 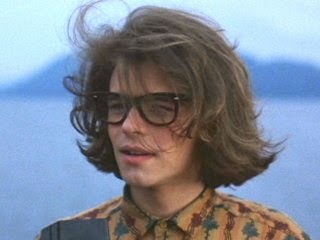 Here's another, in case you needed more proof.

The eighth Friday movie was never going to be good, let's get that out of the way right now. But the ways in which this movie is completely mind-bogglingly terrible provide much more entertainment value than the milquetoast splatter pictures of the late decade, robbed of their splat by the moral majority. That's not exactly a recommendation, but Manhattan can be a fun watch under the right circumstances (bring friends - your life depends on the quality of their wisecracks).

Let's begin at the beginning. Jason is back in the watery grave where he belongs, rotting under the wreckage of a Crystal Lake pier. That is, until horny couple Jim (Todd Caldecott) and Suzi (Tiffany Paulsen) dredge things up again with their pelvic sorcery. When the anchor of their houseboat/portable sex dungeon drags along the lake floor (I'm pretty sure anchors aren't supposed to float aimlessly, but then again I'm not a maritime expert. We'll just have to trust writer/director Rob Hedden, whose qualifications include the screenplay for Clockstoppers, so he definitely knows all about this whole "science" thing.), it snags on an electrical cable and tears it, shocking our boy Jason (Kane Hodder for the second time) to life.

But two measly teens can't quench the thirst of a fan favorite serial killer, now can they? Luckily enough, Jim and Suzi are but two minnows in the school that is Lakeview High, whose senior class is celebrating their graduation with a cruise to New York on the good ship Lazarus. 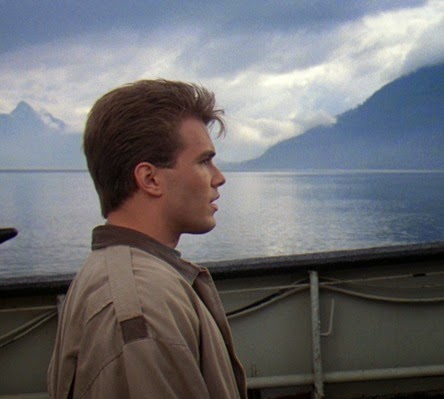 It makes you long for the good old days when kids could be kids and New Jersey lakes connected to the Pacific Ocean via a serenely beautiful mountain range.

This ample collection of Meat includes J. J. (Saffron Henderson), an electric guitar enthusiast who decides that a sea vessel is the best place to bring her amps; Wayne (Martin Cummins), J. J.'s friend and an avid filmmaker, although he would rather be filming Tamara (Sharlene Martin), a coked out hottie whose idea of a good time is knocking the nerdy shy girl into the ocean; Eva (Kelly Hu aka Lady Deathstrike from X2), Tamara's best friend and reluctant drug buddy; Julius (V. C. Dupree), a spunky boxer who wears a hilarious track suit for nearly the entire run of the film; and Miles (Gordon Currie), a blonde human that exists solely as a foil for Sean Robertson (Scott Reeves, also of a whopping 198 episodes of General Hospital), the hunky son of the Captain.

Scott has the hots for Rennie (Jensen Daggett), whose androgynous name and connection with the chaperone/twelve-time Champion Douchebag title-holder, Charles McCullough (Peter Mark Richman) mark her beyond a shadow of a doubt as our Final Girl. The fact that she has a tendency to hallucinate about Jason as a child is just icing on the cake. In due time, Jason hitches a ride with this merry band and knocks them off one by one as they celebrate in their own unique ways (boxing, saunas, snorting coke off a mirror in the cabin hold, trying to seduce your creepy biology teacher who looks like an elderly Bill Nye, to each their own). 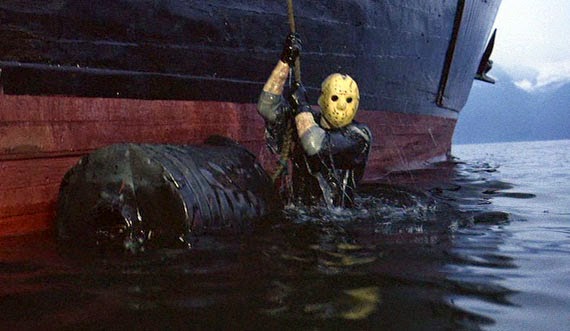 People should really think about inviting him to these things. Maybe he wouldn't be so angry.

Perhaps you have noticed that Jason doesn't appear to be taking anything, especially not Manhattan. Ay, there's the rub. You see, nobody actually gets to Manhattan until the final half hour, at which point it is played by Vancouver save for one scene. Honestly, I don't mind the boat setting at all - it's a claustrophobic change of pace - but false advertising is false advertising and people were rightfully upset.

Luckily the scenes set in New York largely make good on the premise, at least at the most basic level possible. It's not mind-bogglingly difficult to come up with a few cool things for Jason to do in a city. So despite the criminal deficit of artistic merit or even popcorn movie merit displayed by the film, it's smart enough to stick Jason in a subway, have him face off with muggers, and send him careening through Times Square.

There's a lot that's wrong with this movie, but it's not exactly dissimilar to the rest of the franchise - the kills are watered down so late in the game (most kills are cutaways or look like a stunt guy stabbing a pillowcase), the production values are so thin that the fashion industry wouldn't even take them in, and Jason moves according to the whims of the script, at times literally teleporting across rooms (at least, according to the editing) like some kind of magic man.

And the loss of composer Harry Manfredini (who composed the first six and whose work was rearranged with additions for the seventh) removes even that sheerest veneer of class provided by the previous installments. 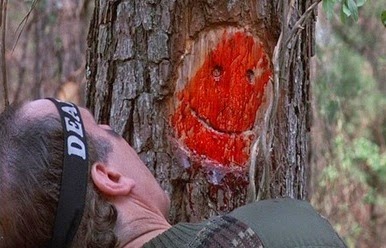 Reminder: This is the type of movie I'm referring to.

But this is a Friday the 13th picture we're talking about. Quality isn't exactly of highest priority. The plot is engaging enough that the weak kills don't feel as punishing as The New Blood and the breaks from formula are refreshing. And Kane Hodder is still in tip-top shape, providing Jason a bubbling rage that fuels him throughout, apparent even from beneath the mask and heavy make-up.

However, what recommends Jason Takes Manhattan above all else is its horrific vision of New York once they actually get there. Part VIII's Big Apple is a dilapidated DayGlo nightmare of graffiti and crime, where barrels of toxic waste are strewn across the streets and any visitor will be immediately accosted by thugs. The film's attitude toward the city can be summed up in one of the worst (this is remarkable considering its company) compositions in the film, a rap song called Livin' in the City (Ain't No Big Deal) which states that "if the crack don't get you, the hookers will."

This childish secondhand approach to depicting one of the world's most well-known cities is riveting, compounded with the heady nonsense of the more supernatural plot points (the ending especially is an endless source of bemusement). So, although Jason Takes Manhattan doesn't quite take you away, it can still be a fun outing if you're willing to overlook the superficiality of the thing and meet it on its own terms.

Sign of the Times: J. J.'s Joan Jett influence lies in more than the name. 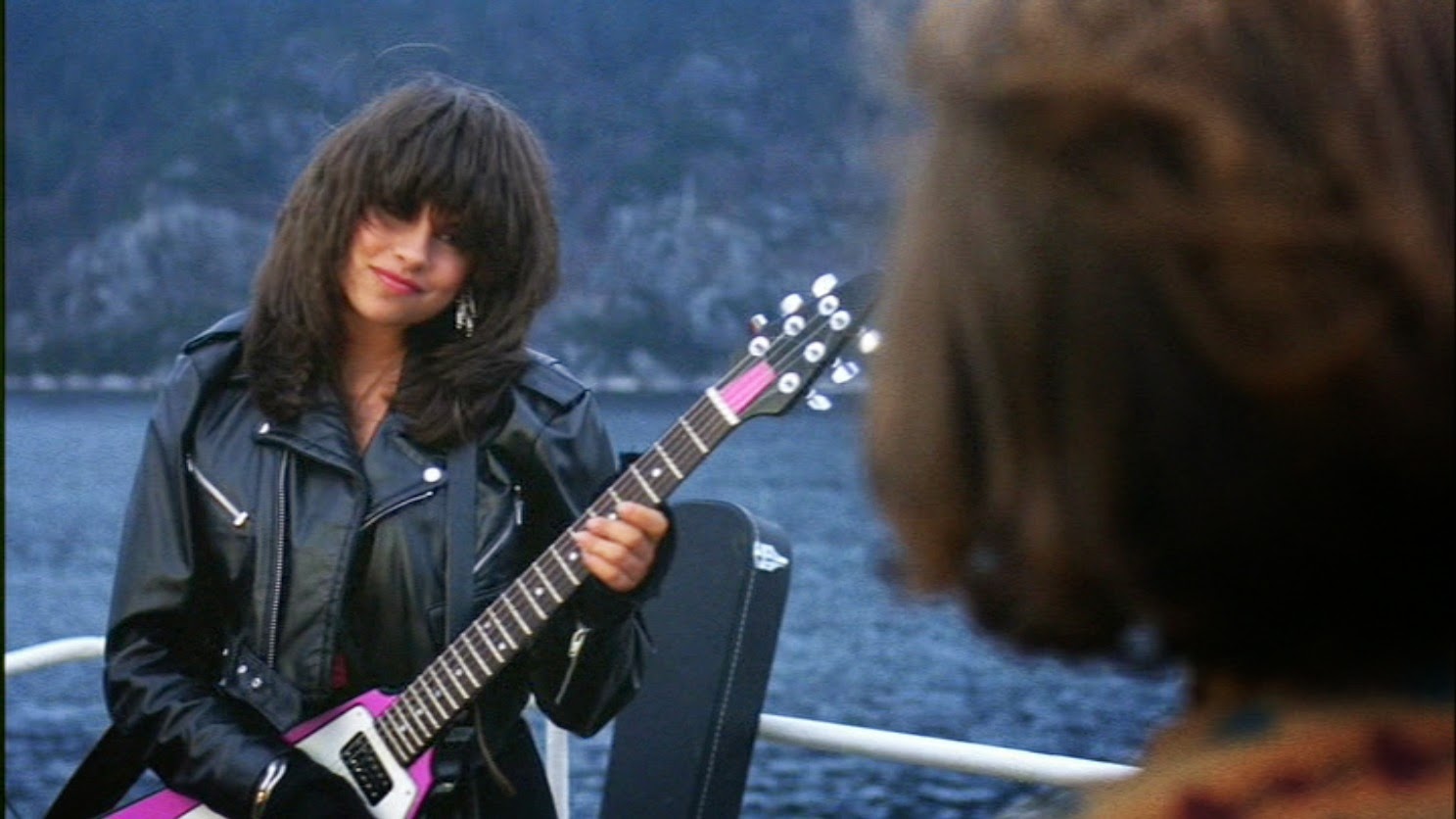