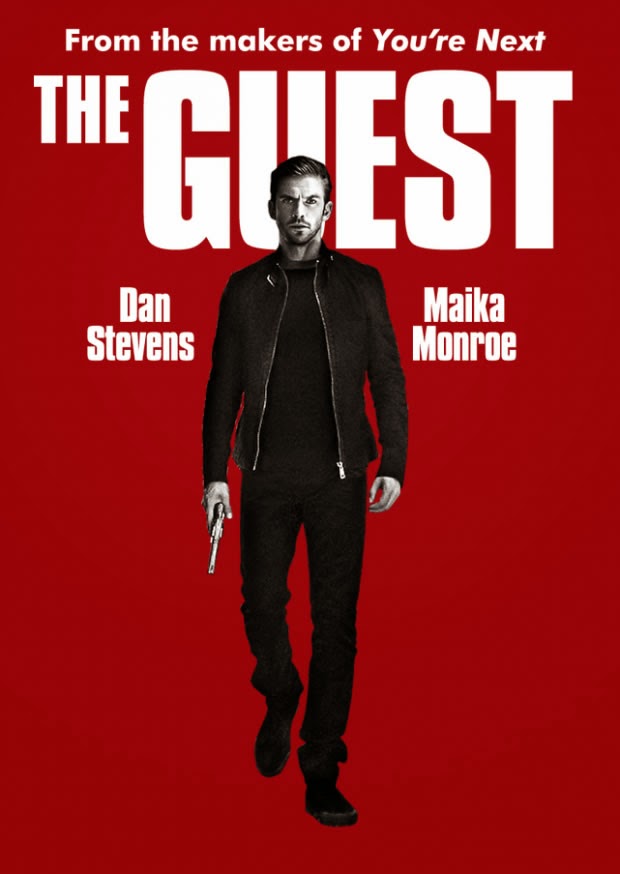 You're Next is a tough act to follow. Although the horror comedy from director-writer team Adam Wingard and Simon Barrett couldn't pull its weight in the box office, the fans it acquired are outspoken and fiercely loyal. Their newest film, The Guest (premiering September 17th), will disappoint unless you can divest yourself from expectation (luckily for The Guest and unfortunately for my favorite movie of 2013, the likelihood of audience members having seen You're Next seems to be slim).

The Guest was never going to be You're Next again. But what it is is still a ton of fun. As described by Adam Wingard himself (I am fancy and important won tickets on Twitter to go see the film at the Sundance Next Festival followed by a Q&A insanely moderated by the moderately insane Nicolas Refn), it's a cross between Halloween and The Terminator with an on-its-sleeve influence from 2011's Drive.

As a fan of slashers, 80's action films, bright colors, and men who look like Ryan Gosling, this is the perfect combination for me. And it will be for anyone who falls into any of those camps. 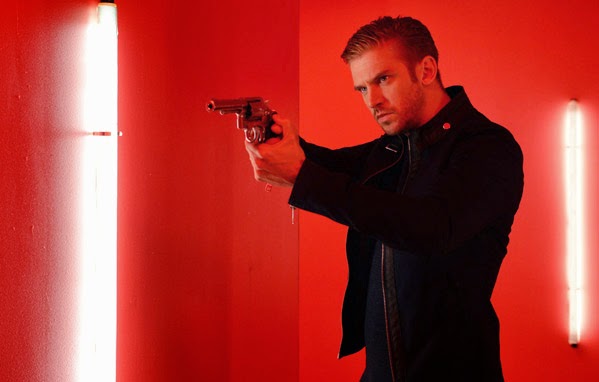 If your favorite movie is Winter's Bone, you're on your own.

The Guest tells the story of a family. Mom (Sheila Kelley), Dad (Leland Orser), nerdy younger brother Luke (Brendan Meyer), and sexy, rebellious older sister Anna (Maika Monroe). Still reeling from the death of the oldest son Caleb in the war, they take in a recently discharged soldier named David (Dan Stevens), who arrives one day on Caleb's behalf to deliver his final message. David charms them with his rugged good looks and his stories about his time with Caleb and everyone lives happily ever after.

Well. No. Not everyone. When people who have wronged the family wind up dead under mysterious circumstances, Anna grows suspicious of the handsome stranger in their midst. Luke already has reason to be suspicious considering the damage David inflicted upon the local bullies, but chooses to ignore it. He may be book smart, but he sure is a dumbass.

The Guest is not art, but it's not pretending it is. It could be about the manifestation of a family's grief or the effects of PTSD. It could have made a self-serious statement about the war and its effect on American society. And it would have been a great movie, perhaps even a better one. But the movie it chooses to be is so entertaining, it's hard to bemoan the more shallow approach to the material.

You can pick it apart all you want, but it's not the plot you're watching it for. It's a suave badass kicking butts and taking names. It's a young blonde transforming from a teenybopper nobody to a confident warrior. And Jiminy Christmas is it pretty. 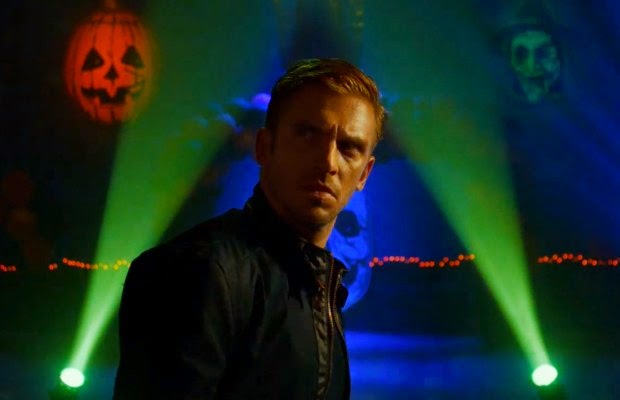 The aesthetic and color palette are about as close as a Refn homage can get without actually being a greatest hits YouTube video, but Wingard lets his inspiration lead him to new places as a director. His use of color and shot composition here show definite growth from the man who made You're Next and are a few of the only elements in the film that outright dwarf his previous venture.

The Kool-Aid tinted world of The Guest draws viewers into the heightened reality of the film, one that's just a step to the left from our own, existing in the collective consciousness of those who grew up in the 80's or, like me, have developed a lasting appreciation for the film culture of that time period. The film's tone can be a little aimless at times (it's not quite a comedy but it's funny, it's not quite a thriller but it's exciting), but the color tones keep us firmly in one unified space.

And, unique for a film of this pedigree, the acting feels like a cohesive whole rather than one seasoned veteran faltering under the weight of a dozen amateurs. Even the more minor roles like Orser as the father or Tabatha Shaun as the best friend key into the funny, strange atmosphere that The Guest puts out. Only Lance Reddick (as a military officer on the hunt for David) draws attention away from the strong ensemble as his acting style tends to shade dangerously close to over-the-top. He's no Icarus, sending the film plummeting to a watery grave, but less camp-minded individuals will have trouble swallowing his performance here. 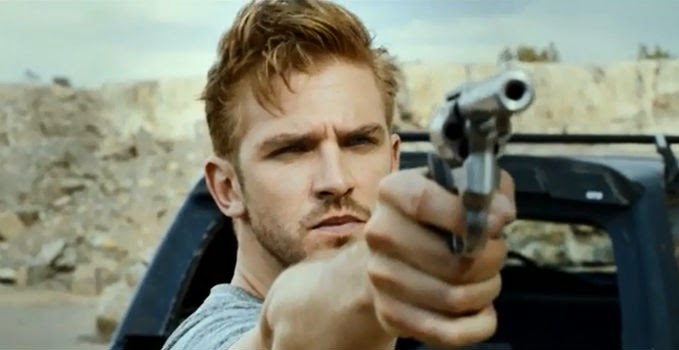 I just set myself up for a great joke but I don't think I should go there.

A few bits and bobs before I leave you. First of all: Man, can Adam Wingard shoot a drink. I can't adequately explain why but my favorite shot of You're Next is orange juice being poured into a glass in the first scene. There's an equally great shot in a bar scene in the first act of The Guest. I don't know what's going on and I refuse to apply film theory and read too far into things, but I like where it's going.

But that kind of observation doesn't do justice to the action-packed fun of the film. The dialogue is razor sharp, the movie references are both subtle (see: Halloween III) and obvious (of course there's a You're Next mask - keep an eye out) but equally fun to hunt down, and there's way too much badass to handle in one single piece of cinema.

I'm not in love with The Guest, but it's a genuinely entertaining film that keeps me excited to follow these filmmakers as they grow and progress through their careers. And although Simon seems to be more self-aware about these things than Adam does, it's great to see that the women in their action / horror films can actually be layered people rather than one-note knife bags.

It's not out for a good month yet, but I urge you to keep this movie kicking around in the back of your brain. Forget about You're Next, buy a ticket, and have yourself a good time.

TL;DR: The Guest is a nearly worthy followup from Adam Wingard and Simon Barrett, although the fun can be shallow.
Rating: 8/10
Should I Spend Money On This? Oh definitely. I know it's tough to go to the movies now that tickets are more expensive, but this one's worth a holler especially if you adore cheesy 80's cinema.
Word Count: 1094
Also sprach Brennan at 4:27 PM