Hello everyone. I'm sure you're wondering why I've gathered you all here today.

Well, you may have noticed (but hopefully not) that my posting this month has been a little sporadic. That would be because I have been frantically searching for an apartment and spending all my free time bleeding onto applications instead of watching movies or (ha!) writing about them. But now things are settling down and I'm moving into the new place and there's only one thing on my mind.

Television has lied to me.

You see, TV shows love to tell stories about people struggling to make a living. It's relatable and the audiences eat it up. The only problem is, especially for a network sitcom, there needs to actually be enough space in the fake apartments to fit a four-camera crew. Anyone who has attempted to make a living in the city could tell you that your average apartment could hardly fit a camera battery let alone anything else.

So it's understandable why the sets would need to be bigger than actual real life apartments that people could afford. More room for crew, more room for antics. But this leads to a series of woefully unrealistic expectations once you set out in the real world, in which people with no discernible income live in ornate pleasure palaces. And thus begins our list for the day: 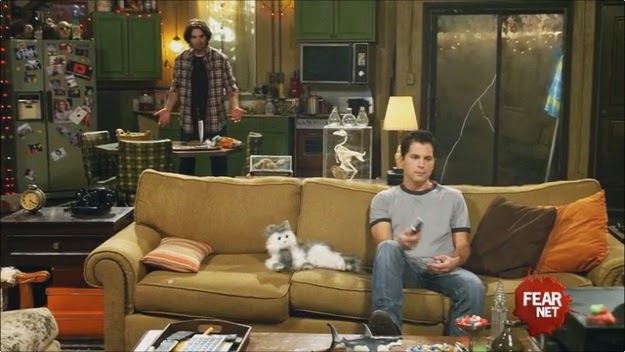 Holliston is a show that I recently got into, and I definitely recommend it for horror fans. It's basically a crappy sitcom, just pumped full of horror trivia, guest stars, and strange elements - like Twisted Sister's Dee Snider as the boss of Joe Lynch and Adam Green (two indie horror directors who play younger versions of themselves).

In traditional sitcom fashion, Adam and Joe can't pay their bills and frequently throw away rent envelopes without opening them to pretend that they never got them. Yet they are somehow still allowed to live in an apartment large enough to fit Gwar's Oderus Urungus in the closet. 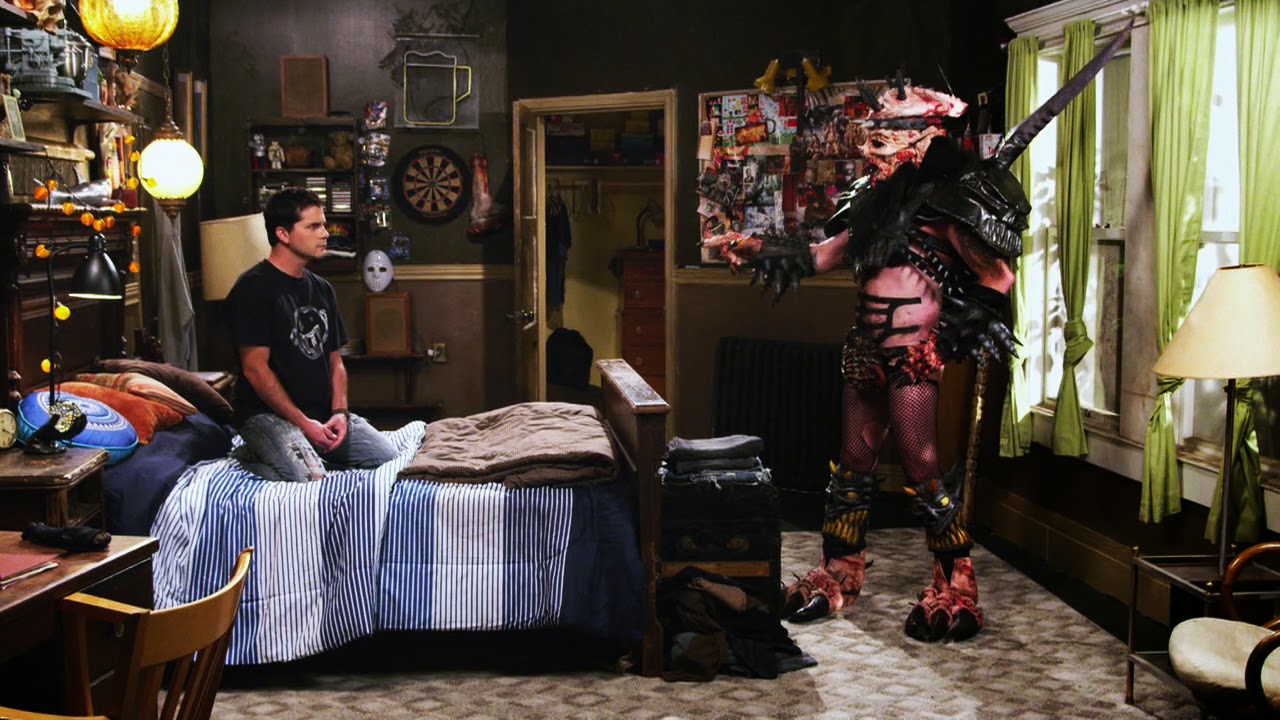 I told you it was a weird show. 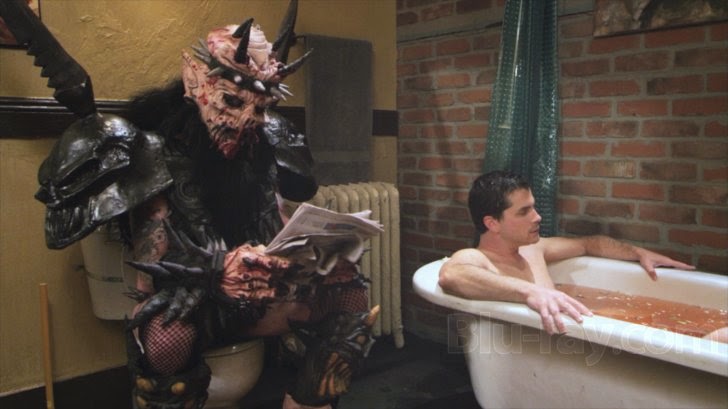 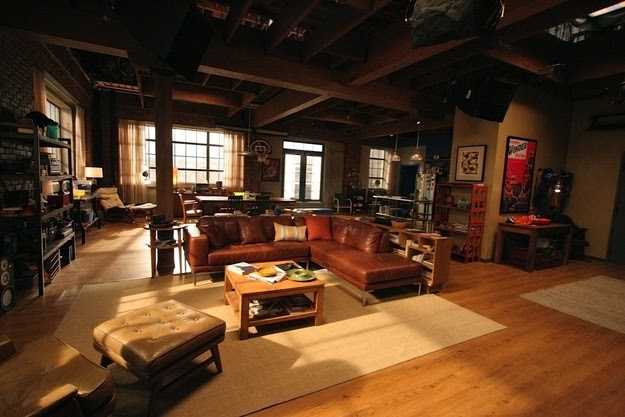 OK, canonically I guess I can't get mad because the rent for this apartment is largely paid by Schmidt, who is a high-powered... bank person, or whatever. I'm not sure that's ever made clear - in true sitcom fashion. But his job involves wearing suits and talking about files so you know he makes a ton of money.

But I still find it patently ridiculous that this is the abode of Jess - a frequently unemployed schoolteacher - and Nick Miller, who - and I quote - "has the credit score of a homeless ghost." These two humans do not deserve the elegant bathroom they receive. I hope they appreciate the glory that is their apartment. 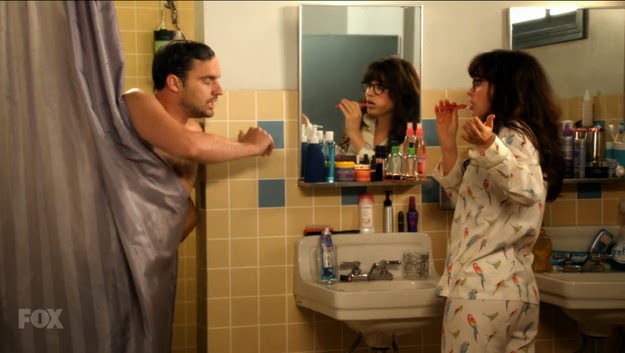 And I find it hard to believe that an apartment containing four single(ish) twenty-somethings in Los Angeles has enough room for Zooey Deschanel to do her quirky schtick to her full range of motion. 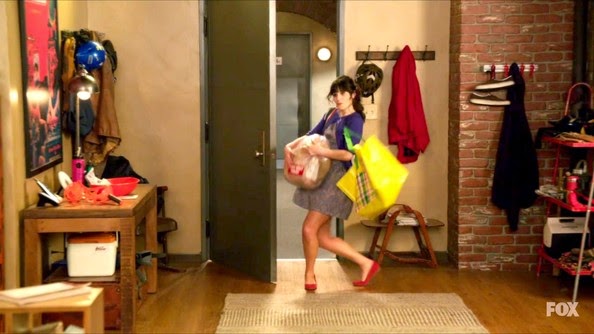 My apartment only has space for about 1 1/2 loopy twirls. 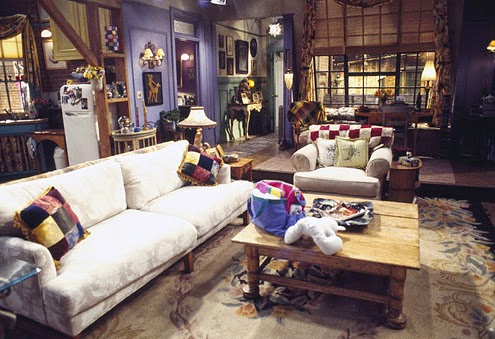 Here's another completely ridiculous apartment, but at least it has somewhat of an explanation. The apartment was owned by Monica's grandmother for many years and thanks to rent control - and a little fudging on the lease - she and Rachel (then Phoebe, then Chandler, then Joey, etc.) can live there with ease. 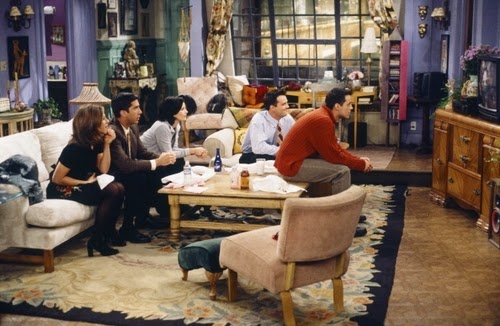 Rent control or not, the idea that six entire people can relax comfortably inside a New York City apartment is sillier than ketchup on Oreos.

And I could decorate the Taj Mahal with Monica's interior design budget. But hey, one million dollars per episode ain't too shabby. 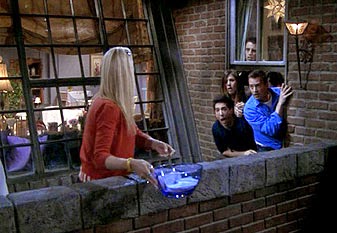 Neither is this to-die-for attached balcony. 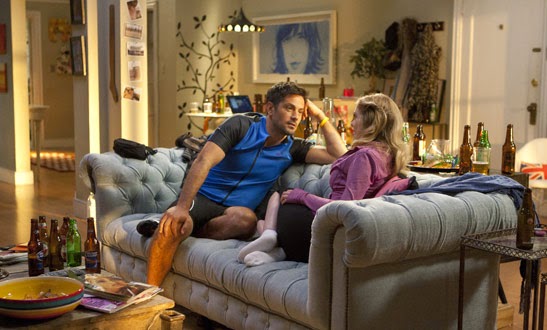 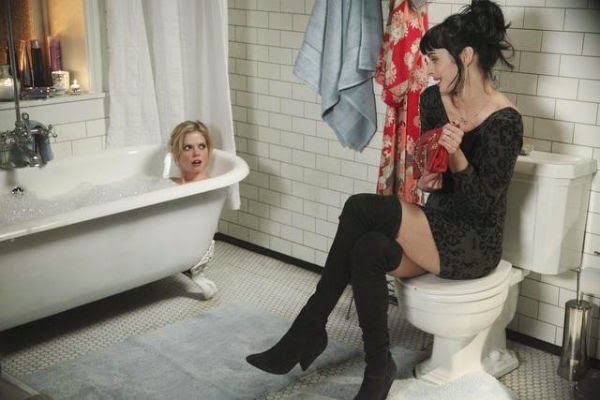 And another standing bathtub! I swear, I'm gonna blow a gasket.

I'm pretty sure slipping bills out of your one night stands' wallets isn't enough to sustain a property that size. At least she's friends with James Van Der Beek. He can slip them a check when things get too rocky. Which, because this is a sitcom, is always. 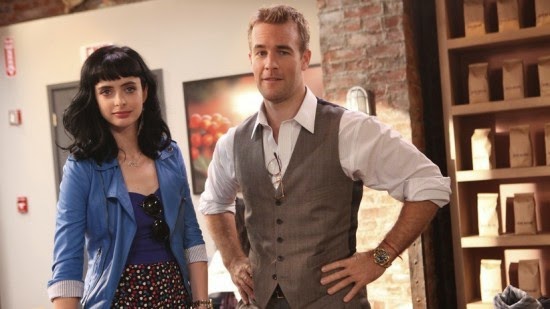 The apartment needed to be large to fit all his handsomeness. 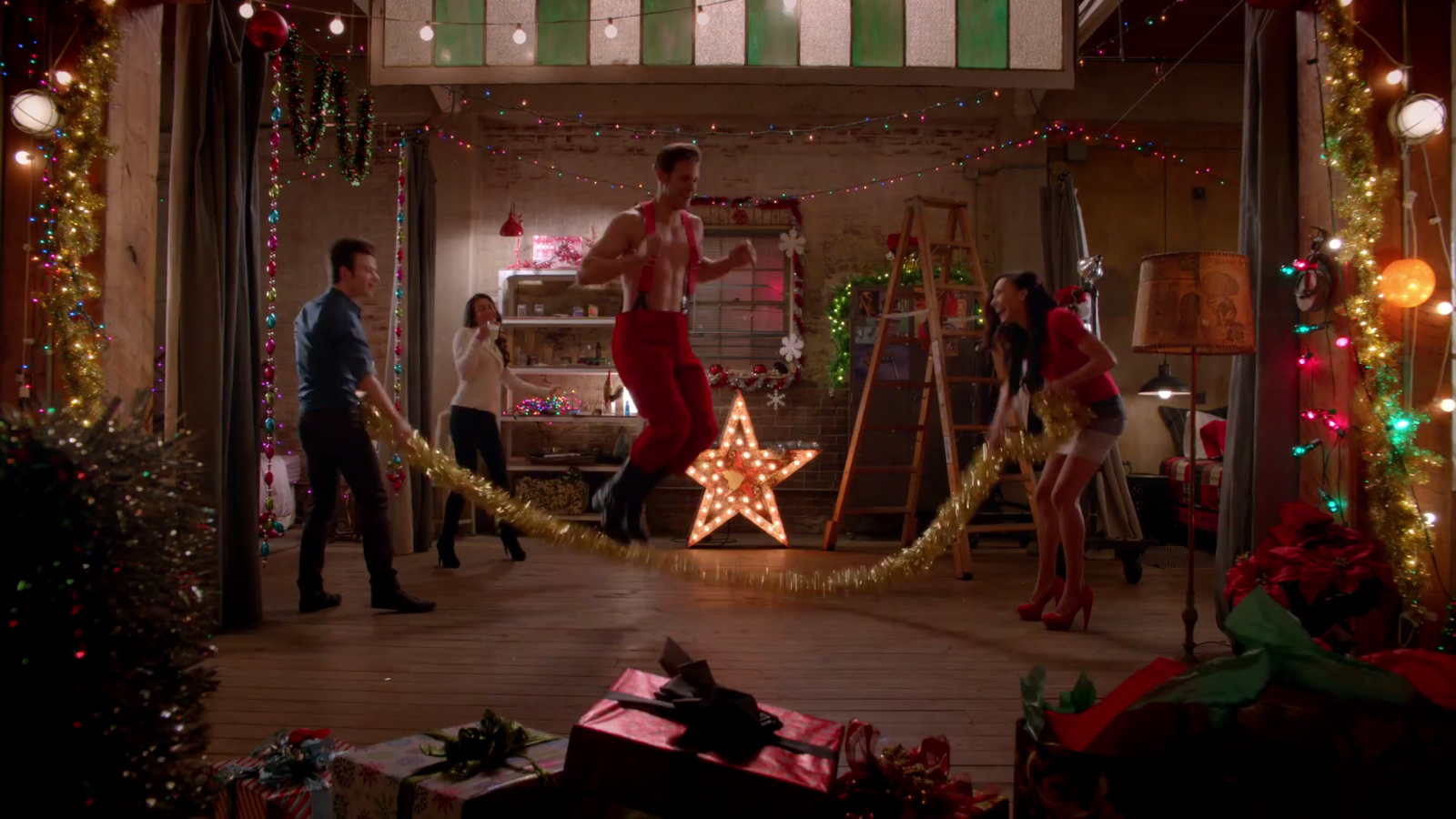 Ah, the Bushwick loft. The crown jewel of this post. When Kurt and Rachel move to New York, they take up residence in this massive industrial space large enough to ride bikes in. 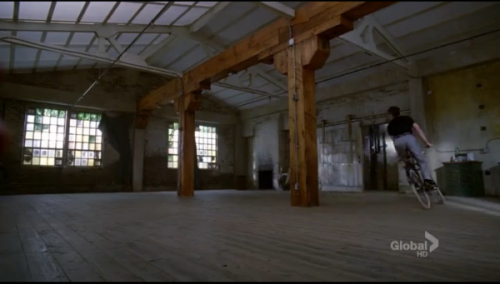 Her being a waitress and him being a... clothes wearer?

We all know by now (five seasons in) that Glee isn't exactly a go-to reference guide for realism in television, but this living space makes me want to cry bulging green tears of envy. This fantasy New York provides two broke college students with a space large enough to hold Rachel's temper tantrums... 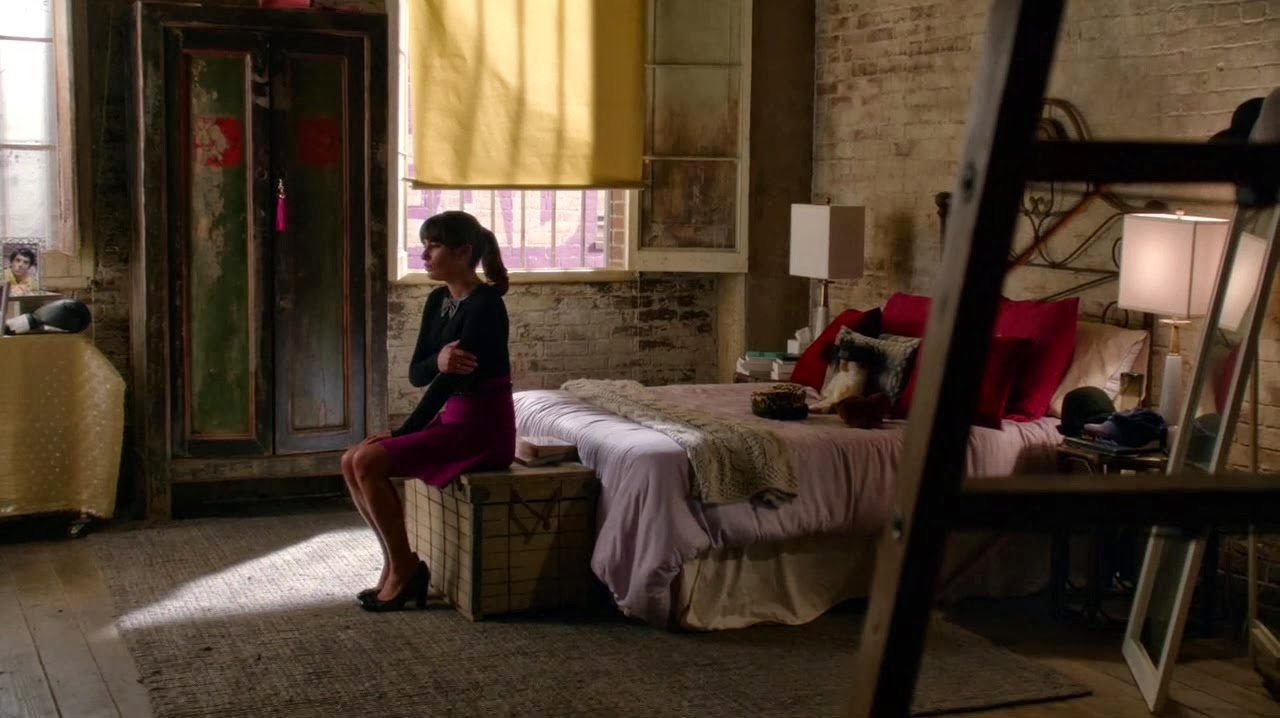 Just one night of her righteous anger could power a third world country for three weeks. It makes me want to puke. 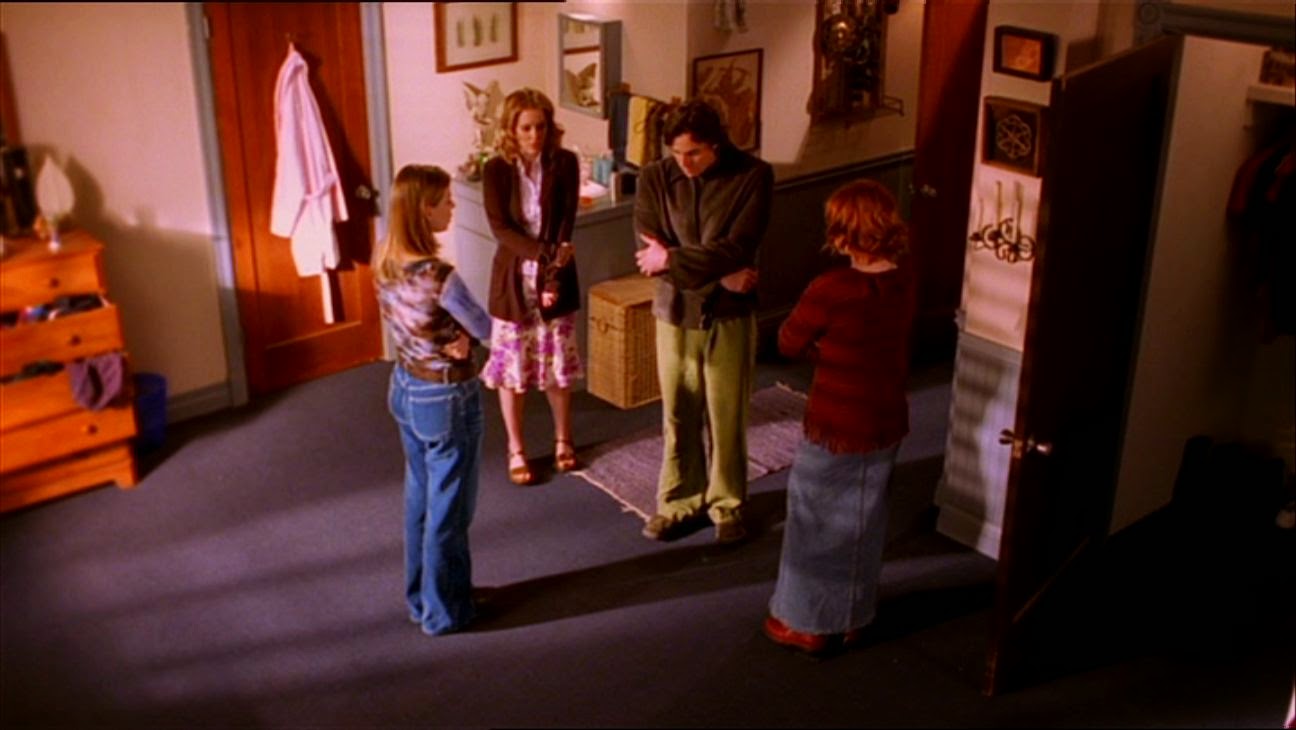 I know it's a UC and they have more money than my cash-strapped CSU, but let's face it. No dorms are good dorms. I have it on good word that the dorms at UCI might as well be oiled because they're packed in like sardines. 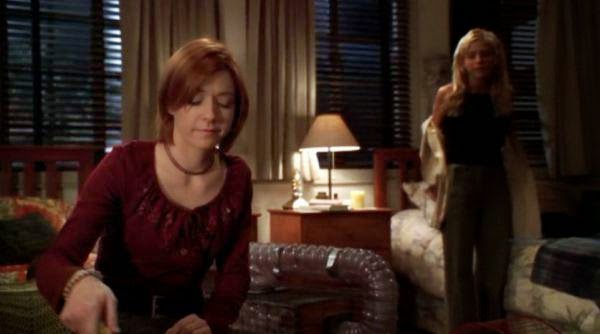 But then there's this.

People might tell you the Initiative is the reason people don't like Season 4, but I don't buy it. It's one-hundred percent displaced college angst and jealousy. 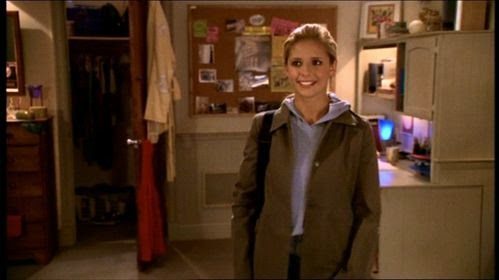 There's enough room not to be forced to shove a furniture piece under the cork board. This is no earthly institution.
Word Count: 1029
Also sprach Brennan at 5:11 PM