Census Bloodbath: Back To Skull - Day 3 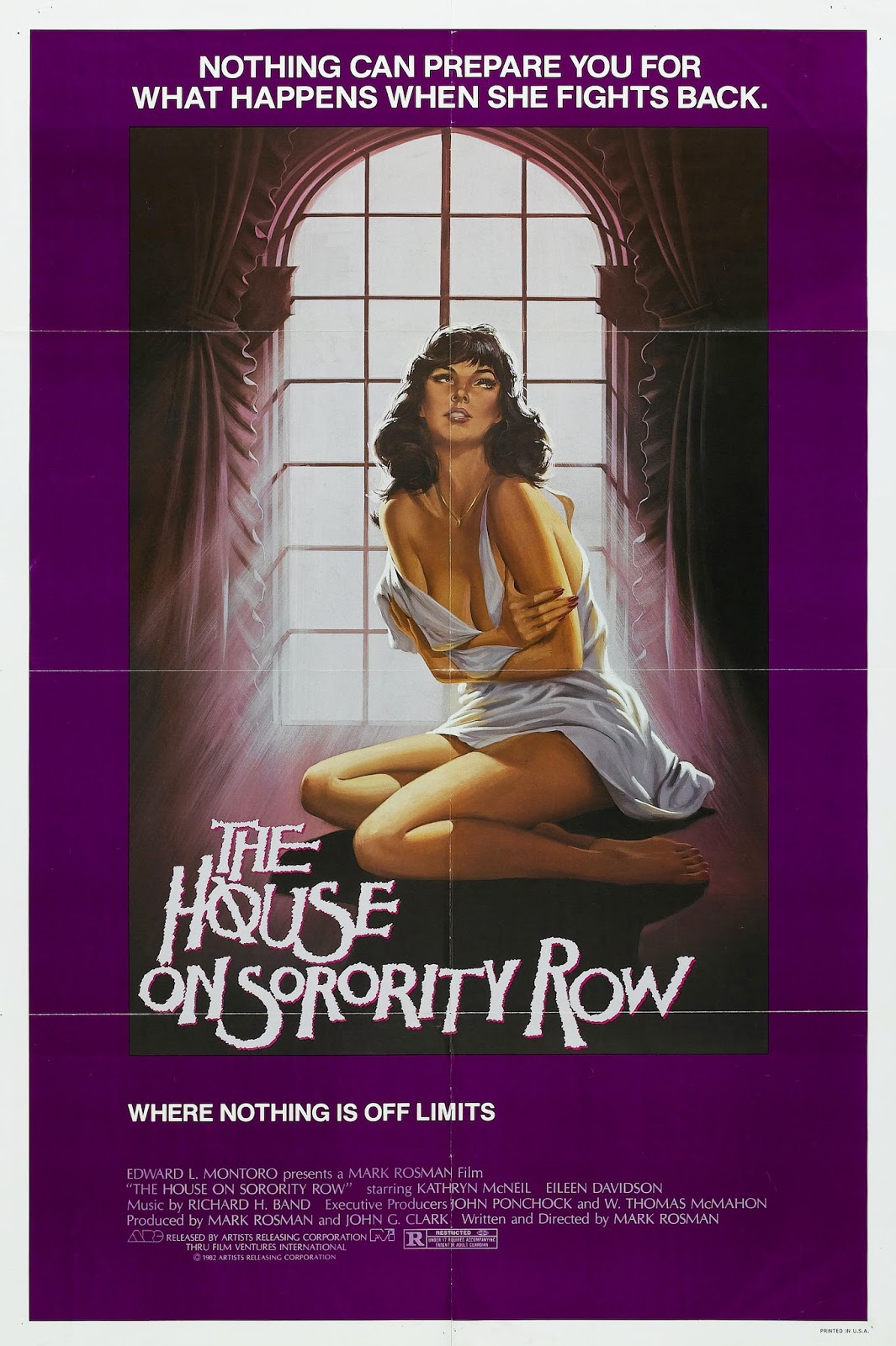 Just like the classic slasher killers, school keeps rising from the grave again and again to haunt us. My educational franchise is currently in its 16th and hopefully final installment, which is why we are celebrating this week. And there's no better way to approach university slashers than diving into a classic subject of the genre - sororities.

A house full of partying girls obviously has a lot to offer to the slasher formula and it's no surprise that producers found the Greek system to be a fertile field to till, starting with Black Christmas in 1974 and ending with the heat death of the universe. Our selection for today is The House on Sorority Row, not the first sorority film out of the gate, but one of the best. 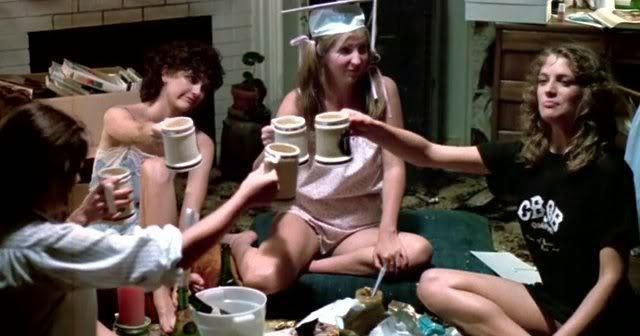 I'll drink to that.

The film opens with black and white footage (tinted blue by producers, who were evidently afraid that the lack of color would cause the young audience's eyes to implode, as if MTV wasn't already doing a good enough job of that) of Dr. Beck (Christopher Lawrence) operating on Mrs. Slater (Lois Kelso Hunt) during a traumatic birth. Beck mutters something mysterious about this being the last one and Mrs. Slater screams for her child.

CUT TO: 24 years later, and the obviously perturbed Slater is the house mother of a sorority on the local campus. She is showing signs of age, relying on a metal cane with a carving of a bird at the head to get around. Slater is outraged to find out that the girls are planning a graduation party on June 19th, the day she usually shuts the house down to be alone on the anniversary of the birth. She responds venomously, leading the girls to counter her verbal attack with a prank involving setting her ornate cane on an inner tube in the middle of the never-cleaned pool and pointing a gun at her, forcing her in.

As you can imagine, this doesn't go over well and Slater is shot, forcing the girls to scramble to cover their tracks as the party begins, dumping the body in the pool and praying nobody discovers her until they can figure out what to do in the morning. As the party begins, a menacing killer begins picking the seven implicit girls off one by one with Slater's sickeningly sharp cane (sharp as in lethal, although it is pretty stylish to boot). Is it Mrs. Slater, not quite dead? Or is it something far more sinister?

The seven sorority girls provide us with nearly our entire platter of Meat, so let's spend some time getting to know them. There's Liz (Janis Ward), a soon-to-be stewardess with a fear of flying; Jeanie (Robin Meloy), a mousey girl who is prone to hysterics; Diane (Harley Jane Kozak), a down-to-earth girl who is going into law school; Stevie (Ellen Dorsher), the smartest of the bunch and the one many of them turn to for guidance; Morgan (Jodi Draigie), a ditsy blonde who gets soused more times a week than there are words in this sentence; Vicki (Eileen Davidson), the wicked and vain leader of the septet, the girl who suggested the prank in the first place; and Katherine (Kate McNeil), a shy girl who's unsure about what to do with her life although she does know she wants nothing to do with this body-hiding business. This combination of reluctance to comply with the group and character traits that might be found in a script outside of the exploitation genre mark Katherine as our Final Girl as clearly as if they had painted a red target on everybody else's foreheads. 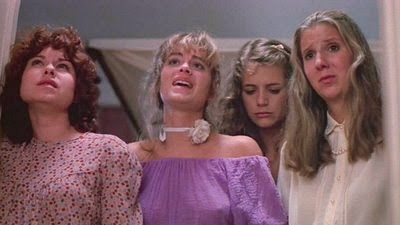 Although that neck accessory does the trick nicely.

Did y'all notice that I had to trot out four whole paragraphs just to get through the basic scenario? The House on Sorority Row is tricky like that, providing a great deal more working beneath the surface than your average bear. It's no great intellectual classic, this film. The characters tend to be paper-thin and as interchangeable as pegs on a Lite Brite board, and the setting is there for the reason that it gives us a chance to watch girls change (Morgan's sheer gossamer top certainly caused several young boys in the audience to hit puberty then and there).

But this is a movie that very literally portrays the process of guilt tearing a group of friends apart. A terrific panning shot across a dance floor links all seven girls together, blaming them as a unit for the murder of their house mother even as their reactions and motivations for keeping the secret vary wildly.

This isn't the only time that The House on Sorority Row acts like it's an actual piece of cinema. It's by no means a terrific film, but that doesn't mean it can't be a great slasher. Writer-director Mark Rosman (who would go on to direct to Hillary Duff films, so it's up to you to ascertain which career direction is more terrifying) works hard to separate his film from the pack with a strong visual language and kinetic editing, providing some of the very best scenes of tension in a film of this mint.

Because, despite all the limitations of the genre, Rosman's film actually succeeds in creating and maintaining a consistent sense of dread, whether it's in an attic door slowly creaking open over a hapless Morgan or Jeanie cowering in the bathroom stall as the shower heads turn on one by one, filling the room with noise and steam. The Final Girl sequence especially benefits from a full-steam-ahead approach to visualizing the mental condition of a harried survivor through cross-cutting, color palette, and composition. 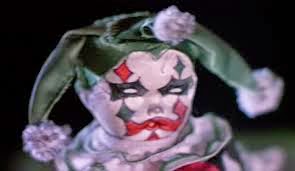 This flick is filled to the brim with childhood memorabilia and toys, notably a clownish jack-in-the-box and a colorful ball, both eliciting a sense of the deep trauma lying dormant in Slater's psyche and reliably tapping into the inherently creepy aspects of playthings that have no children to play with them.

So despite any flaws in the acting (Draigie forces dialogue out of her mouth like she's performing a verbal Heimlich maneuver; McNeil is only intermittently convincing, swinging between naturalistic guilt and lolling, drowsy fear), production design (a "cemetery" looks like a barely spruced-up golf course), and sound mix (the mixing of the party music - provided by the incredibly underrated band 4 Out of 5 Doctors - is exactly as amateurish as my first student film), The House on Sorority Row soars thanks to a stylish atmosphere and solid thematic material.

The ending is terrific [In an impressively thorough twist, Slater's mutant son Eric (Charles Serio) is performing the killings in revenge for his mother's death] and the gore - though far from being an out-and-out bloodbath - delivers in a satisfying way. The House on Sorority Row has the essence that makes all of the best 80's slashers. Namely, fun characters, loony dialogue, creative kills, a great location and setup, and an all-encompassing sense of fun interspersed with surprisingly scary moments. It's no Nightmare on Elm Street, but it has a head on its shoulders, which was something altogether uncommon in the ripe old year of 1983. 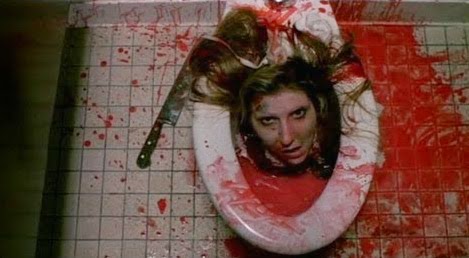 Sign of the Times: The band that plays at the party is called 4 Out Of 5 Doctors and this is their song. (I apologize for the, er, unorthodox choice of background. I didn't make this video.)

Scariest Moment: In a film with an appealingly large number of actually effective moments, one of the best is a hallucination Katherine has after Dr. Beck sedates her.
Weirdest Moment: Girls at the party gossip about a cute boy, intercut with footage of a greasy nerd winking at them. Maybe it's an 80's thing.
Champion Dialogue: "I wanna thank you for helping me become what I am today. Wasted."
Body Count: 9; also a parakeet and a water bed.
TL;DR: The House on Sorority Row is a surprisingly thrilling, visually solid slasher.
Rating: 9/10
Word Count: 1426
Reviews In This Series
The House on Sorority Row (Rosman, 1983)
Sorority Row (Handler, 2009)
Also sprach Brennan at 1:09 PM