The Backside of Water

Alright, I'm gonna try something new here. School and work have both been keeping me busy as a worker bee, so I'm gonna expedite my blog process by combining two features together! One of my homework assignments was to watch The African Queen and write a two-page response about the characters' arcs. Normally I'd post a review and an essay post separately, but I'm gonna stick them together as a mini-review/essay feature and see what happens! Let the great experiment begin! 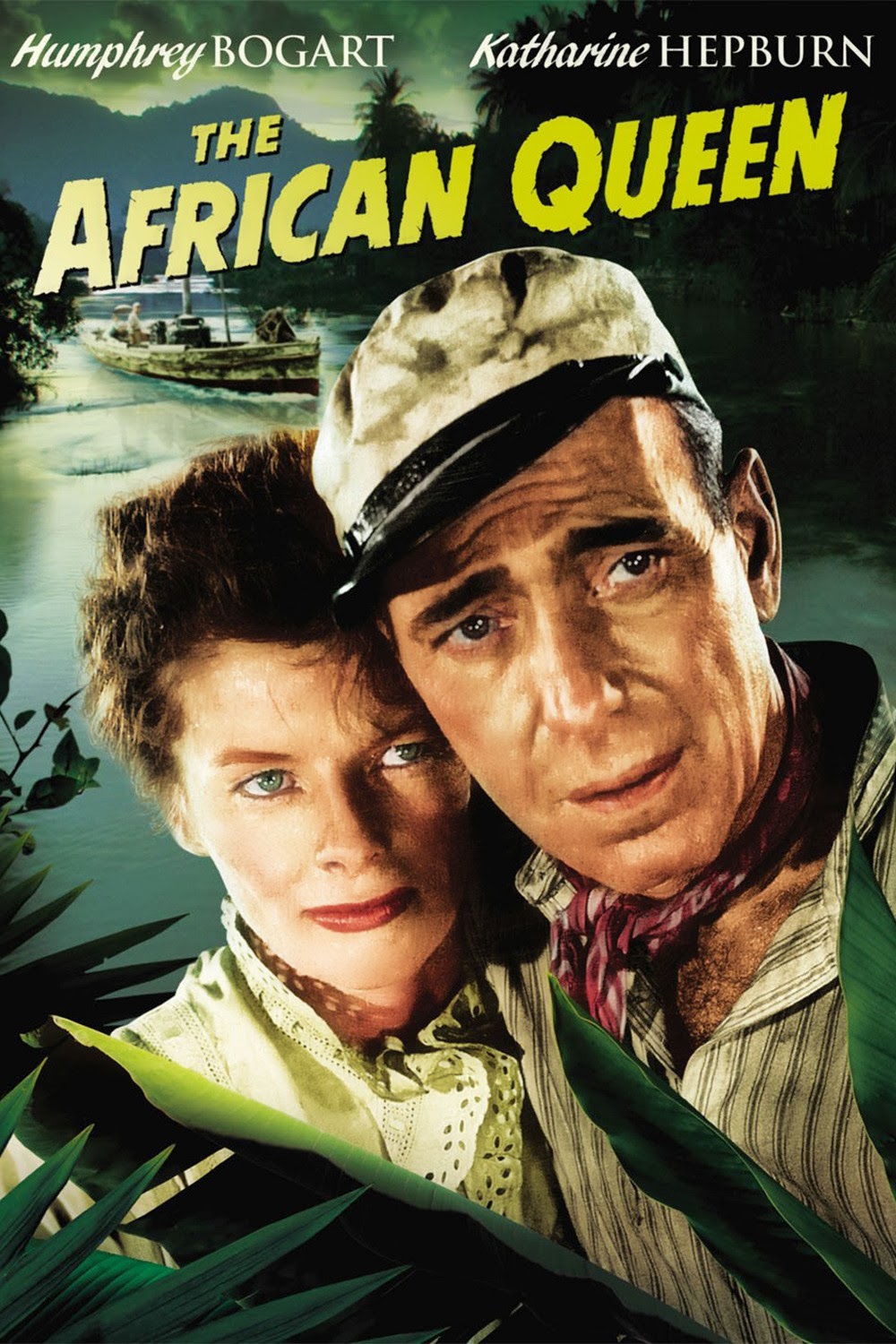 Fun Fact: John Huston, the director famous for his work on the 1980 slasher picture Phobia once directed an obscure adventure flick with Humphrey Bogart! What a skeleton in the closet, am I right?

Really, I'd rather watch Phobia. Not to sound like a classics-hating stabby film-lover, but I found The African Queen to be an absolute slog. Now, although I'm an outspoken opponent of the reign of Citizen Kane, I don't just hate films because they're old. Black and white cinematography doesn't make me want to claw my own eyes out like some of my modern peers.

I'll give anything a chance. Because you never know what you might enjoy. Unfortunately, this film was not it. The story of Charlie Allnut (Humphrey Bogart), an alcoholic riverboat captain, and his reluctant companion, poised missionary Rosie Sayer (Katharine Hepburn)'s escape from German-occupied Africa during World War I is interesting enough to support a good 40 minutes of its run time, but can't sustain it much longer than that.

Bogart is hidden behind a pair of false teeth and jokes about indigestion, but manages to keep up with Hepburn. These were two great actors in their prime after all. So there's that. But a leaden adventure gives way to a sallow romance in the least engaging way possible (although the film does give us one of the most hilarious "Escape the Censors" sexual innuendos I've ever seen).

And although this film has a lot to do with female empowerment, a theme far ahead of its time, that fact doesn't make up for the dull exposition and alarmingly consistently incongruous music (Bogart drinking a bottle of gin is given as many minor key bleats and crescendoes as a particularly gruesome Freddy murder).

So, no. I'm not a fan. But hey, the film gets extra points for inspiring the Jungle Cruise. And although it's a low tier classic, it didn't make me want to roll over and die like Lawrence of Arabia. Hooray!

Prompt: How do both characters arc (change their beliefs and actions) and how does their relationship spur and mirror that change? In essence, how does each character affect his/her "flaw" and how does that occur over all three acts?

[AN: Note how nice I was to the film in my essay. It always pays to brownnose.]

Regarding character, The African Queen is an excellent case study. John Huston’s rollicking African adventure is practically a one room drama, with most of the action taking place between a pair of isolated characters. The plot (two people must escape a river while under siege by German troops) is intentionally simple for the express purpose of allowing the audience more time with the characters and their arcs.

The characters in question are Charlie Allnut (Humphrey Bogart), a Canadian riverboat captain and hopeless drunk and Rosie Sayer (Katharine Hepburn), a straight-laced British missionary woman. In the beginning of Act One, the characters are exactly where you’d expect. Rosie is leading a roomful of natives in a hymn, the same thing she has been doing every Sunday for ten years. Charlie is delivering the mail, perturbing Rosie and her brother with his uncouth behavior.

But when the village is destroyed by rampaging German troops and the brother dies of illness, these two are thrown together in a desperate attempt to survive and escape. Throughout their journey, Rosie and Charlie will forge a formidable bond and bring out the best in one another. However, at the beginning of their journey, both man and woman are deeply flawed.

Rosie has never let her hair down. Constantly fussing with her elaborate updo and primly reprimanding Charlie for his behavior, she finds comfort in the manners and routines of her home country. Living for so long with only her brother for company has left her stiff and emotionally unavailable.

Charlie, on the other hand, has never taken responsibility. Sure, he brings the mail in on time, but that’s only because there’s nobody else who wants to do it. He’s living what he considers the good life, chugging up and down the river all day on the African Queen and drinking himself into a stupor. He’s inconsiderate during his brief stay in the Sayer’s home, but only because his laid back life has left him unprepared to care for the feelings of others.

In Act Two, everything begins to change. Rosie and Charlie constantly butt heads due to their inherently different lifestyles, but one rainy night when Rosie demands that Charlie not enter her private (and dry) enclosure, she sees that her rigidity and modesty is wildly inappropriate for the situation. She relents, both literally and figuratively letting him in, allowing him to see the first chink in her armor and finally recognizing his humanity. When the tossing river rapids show her how to have a good time, her change begins in earnest.

On the other hand, Charlie, who has only ever lived a life on his own, begins to understand the needs and desires of this woman whom he has begun to care for. Although he clings to his drink and his rugged lifestyle, Rosie showing her true colors begins to chip away at his hardened façade.

As these two characters feel their carefully constructed realities crumbling around them and realize their attraction for one another, they enter Act Three and will never be the same. The intensity of the journey has worn them to tatters and the two are at the end of their rope.

When push comes to shove, both characters come out on the other side, completely the opposite of the way they were before. Rosie suggests with bravado that they torpedo the invading German ship while Charlie, newly sensitive, thinks she’s insane. Where the adventure charged her batteries, it wore his down and the two find themselves switching positions, only to clash once more.

However, once they are captured and brought aboard the ship, Charlie realizes how lucky he is to be alive and with Rosie. Seeing her face and the new vivaciousness he has bestowed on her spurs him to new fervor as he tries desperately to save their skins. By the successful end of the finale, both characters have completely transformed and blossomed, all thanks to that fateful trip on the African Queen – and into each other’s worlds.
Word Count: 1157
Also sprach Brennan at 4:48 PM