Everything You Know Is Wrong

As somebody in my line of work, I spend a lot of time reading, writing, and thinking about horror movies. I've spent so much time around them that even some of the most obscure bits of trivia seem like blisteringly obvious facts to me.

"Of course Stuart Gordon didn't direct The Howling, that's the film that inspired him to make Re-Animator, duh!"

But skewed as I am, there are a few ideas people have about my favorite genre that are both unshakeable and completely incorrect. It's weird how pop culture does this - it can be everywhere, the talk of every dinner table, but people can have totally incorrect cultural memories.

You know Darth Vader doesn't actually say "Luke... I am your father."? Yeah, neither does anybody you ask on the street and you know they've all seen Star Wars. These things happen and there's no earthly explanation. 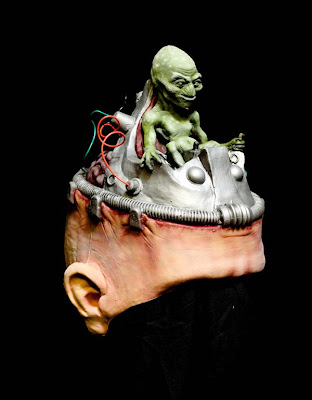 I said no earthly explanation.

So sometimes people remember even super obvious things incorrectly despite hard evidence to the contrary. Thanks to my area of expertise, I see now that it is my destiny to return order to the community, at least horror-wise, and correct some of the more persistent myths.

Now I know some of these are based on a lot of technicality, but suck it up, I wanted an even ten. Here goes nothing... 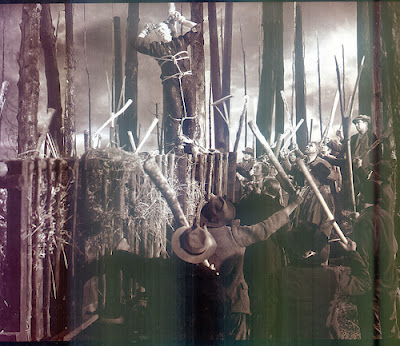 We'll start with an easy one. Most of us have learned at this point that the hideous creation portrayed by Boris Karloff is Frankenstein's Monster. Frankenstein is merely the man that created him. Nevertheless, this won't stop the world (including myself sometimes) from calling him Frankenstein. Even movie titles got in on the fun eventually. 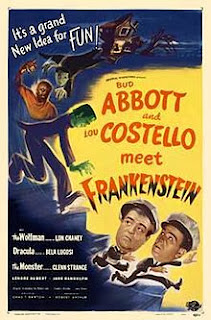 How exciting! I can't wait to watch this classic comedy duo converse with the famed Baron.

Although it's perhaps an incurable one at this point, it's still wrong. We're all wrong. I'm sorry. That's just the way life is sometimes. 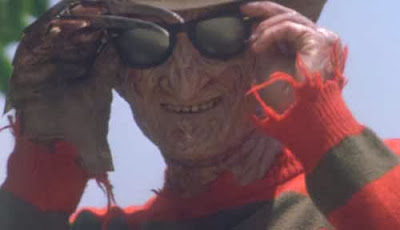 OK, OK, OK. Freddy is a hilarious prankster. He spouts off puns as he kills teens by slamming them into TVs, turning them into living cartoons or video games, and other silly crap like that. But did you know that didn't actually start until A Nightmare on Elm Street 3: Dream Warriors?

For the first two films, the Kruegster was still a menacing presence. Sure, he took unusual delight in his craft but it was with the wicked sneer of a cat playing with its mouse, not the merry chuckle of a court jester. And in the second one, he was just a little gay, not actively funny. 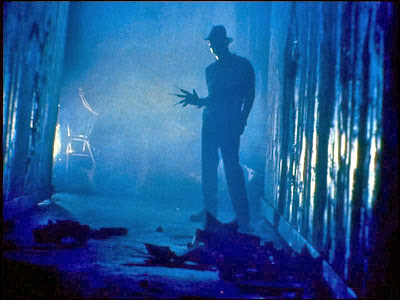 If you think this is funny, you have a much weirder sense of humor than I do. Text me.

Some people find the original Nightmare unscary because all the 80's stuff is a little cheesy, but that doesn't mean it's humor. At least any more than legwarmers and jelly bracelets.

MYTH #3: That "Cabin In The Woods" Stuff Is Such A Cliché 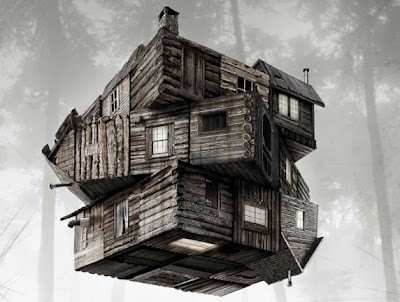 God, I know, right? Those partying teens have really got to pick a better spot for their vacations. It was the entire premise Joss Whedon's great The Cabin in the Woods and the subject of a long conversation in the also great Dead Snow. But let's take a step back.

That seems a little weird. Wouldn't it be better just to use other cabin movies so people couldn't do a quick Google search and disprove the dialogue? I mean, Bloody Disgusting has a whole Top Ten list of... No, wait. That list includes an RV in the Desert movie, a Tent in the Woods, three Summer Camp movies, the aforementioned satires Cabin in the Woods and Dead Snow, and a movie that isn't even horror at all.

Basically it's just the Evil Dead trilogy and not much else. What's this? Only two of those movies actually take place in a cabin? Aw, screw it.

MYTH #4: The Texas Chain Saw Massacre Is A Gory Bloodbath 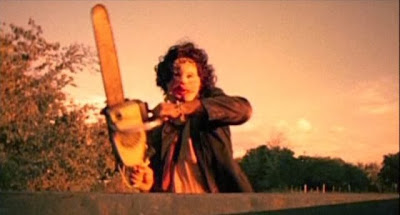 Come on! It's right there in the title! A girl gets hung on a meathook, a wheelchair kid is disemboweled, not to mention there's an entire house furnished with body parts.

It's all pretty intense. So intense, in fact, that everyone was too busy cringing and squinting their eyes to notice that there's scarcely even a drop of blood in the entire film. Sure, there's a hitchhiker that cuts his hand and some miscellaneous spatter on the Final Girl, but that's about it. The rest is all implication.

Tobe Hooper has such mastery of the cinematic form that TCM is so brutal and nihilistic that you feel like it's gory and disgusting. But the fact remains that this was a low budget movie and stage blood is just another expense. Leatherface isn't made of gold.

Well, he wasn't at that point. 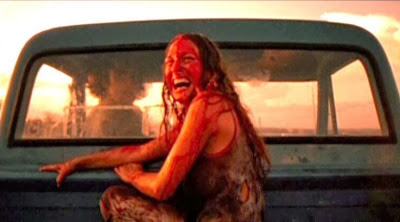 This scene was basically their entire blood budget.

This doesn't mean you should't watch Texas Chainsaw. No not at all. It's a superb movie that beats at your nerves like a cannibalistic manbeast with a meat tenderizer. Just don't expect too much of the red red krovvy to satisfy your appetite.

MYTH #5: Night of the Living Dead Is A Zombie Movie 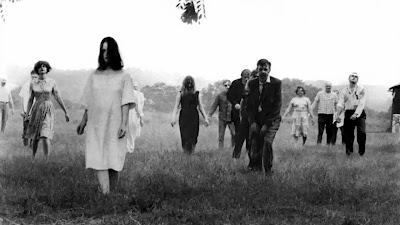 OK, this one is a little technical. But think about it. George Romero's seminal classic came out in 1968 and started the zombie movement, leading all the way to today's Walking Dead. So why did Romero call his flesh-eating revenants "ghouls?"

Because the zombie title was already taken, yo.

All the zombie films before NotLD were based on the voodoo idea of reanimated corpses that were servants to the priestess. They didn't eat flesh, they didn't turn unsuspecting victims into them. They just did junk that their mistress ordered them to do, including such horrific acts as *gasp* tending the fields. 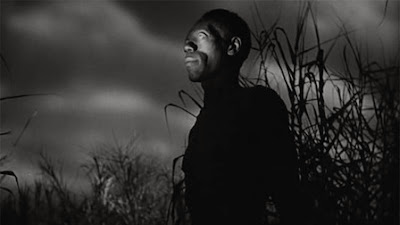 So be careful when you're renting a zombie film made before the 70's. Unless you need a good nap, that is. 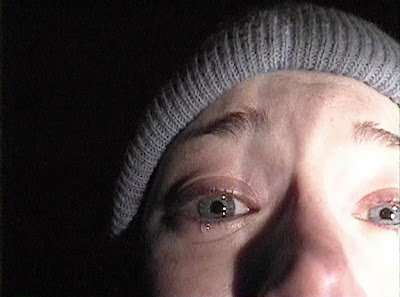 [REC], Quarantine, Paranormal Activity, Cloverfield. None of these films could have existed without the low budget innovation of The Blair Witch Project. That film ate up the media with the conceit that three documentary filmmakers vanished in the woods and left their tapes behind. Most of the audience had no idea the footage wasn't real, which made it all the more terrifying.

What they didn't know is that, in 1980, a gory little Italian film about a documentary crew's retrieved footage of an excursion to the Amazon was disgusting Europeans everywhere. That's right. Cannibal Holocaust came out a full 19 years before Blair Witch, but was deemed too immoral and distasteful to deserve the proper title of Papa Found Footage. 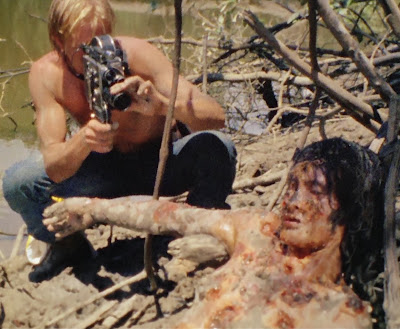 Providing a strong counterargument to the idea that cannibal films always hit it big at the box office.

It makes sense that nobody remembers it. It wasn't a hit anywhere but in cult cinemas. But still. First. 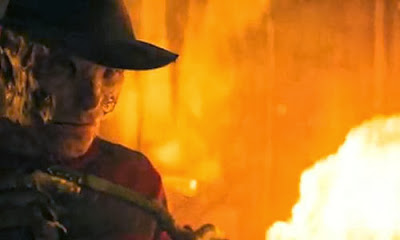 Ah, the rallying cry of horror fans of the Millennium. And it's not far from the truth. One look at the odious Nightmare, Prom Night, and Halloween reboots would tell you as much.

But remakes have long been a thriving part of the horror community, updating old but resonant ideas with the changing times. If there was a button that could erase all remakes from the world, few horror fans would hesitate to press it. But doing so would rid the world of John Carpenter's The Thing and David Cronenberg's The Fly. The Blob would vanish in a puff of smoke.

The Hammer remakes of classic Universal monsters would be gone, destroying the careers of genre A-listers Peter Cushing and Christopher Lee. Jekyll and Hyde. The Ring. The Grudge. All gone.

And did you know Wes Craven's The Last House on the Left was essentially a remake of an Ingmar Bergman film called The Virgin Spring? 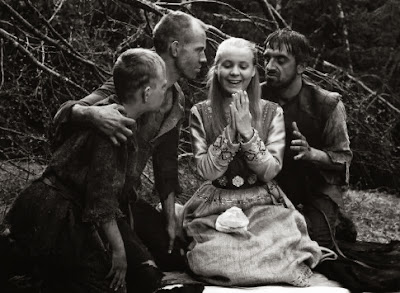 Ah, yes. I see the resemblance.

And not even all remakes of the past decade are terrible. The Wizard of Gore was unsteady but unspooled a marvelously modern and convoluted story from a pretty tedious Herschell Gordon Lewis gore flick. Fright Night and Evil Dead were pretty great. And I have it on good authority that Black Christmas, Texas Chainsaw, House of Wax, and The Hills Have Eyes aren't too shabby either. So for every One Missed Call (a bland and thoughtless affair) you get a Sorority Row (a lovingly cheesy splatter picture with Bruce Willis' daughter) and that's alright with me. 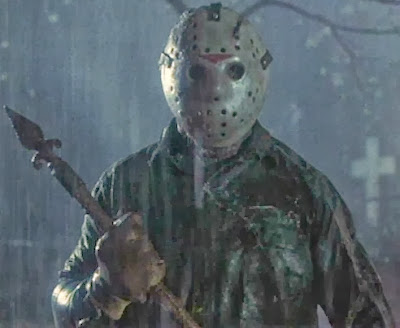 What am I talking about? This is the plot of every single one of them, right?

...You know where I'm going with this. Let's take a look: As of today, there's 12 Friday the 13th films, counting the remake and Freddy vs. Jason. FvJ, Part V, Part VIII, Jason Goes to Hell, and Jason X don't even take place at Crystal Lake so they're all out - there's no counselors anywhere to be found anyway.

So that narrows us down to 7. Only three of which feature counselors as victims: the original, Part 2, and Part VI. And as we should all know by now, Jason's mother is the killer in the first one so that one's gone. And Part VI takes place at the newly renamed Camp Forest Green which is a technicality, but hey. No Crystal Lake.

So that just leaves us with Part 2. Jason mows down a crop of camp counselors! Surely that counts for something in the saga of this hockey masked buffoon! 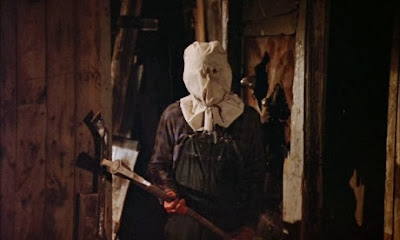 That's Baghead Jason up there. The killer from Part 2. Everything is a lie. All of it.

MYTH #9: Drew Barrymore Is The First Victim In Scream 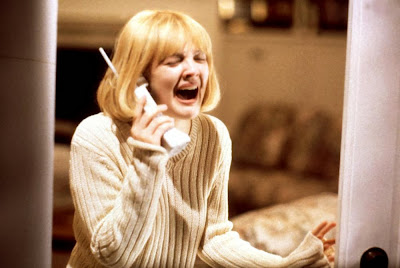 No! That has to be right! I've seen that movie twenty gosh darn times!

Although she dies in the first scene of the film, her boyfriend Steve is eviscerated in front of her before she bites the dust. 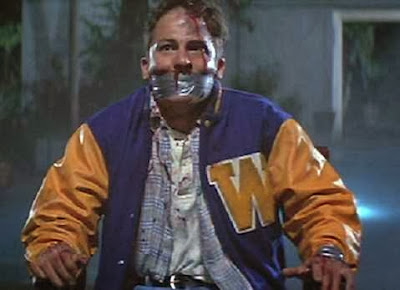 Poor kid only got one word out before he kicked it.

Now you have some great info to pull out on some unsuspecting competitors next Halloween on Trivia Night. Or, you know, if a playful madman calls you.

MYTH #10: Escape From Tomorrow Looks Like It Could Be Cool 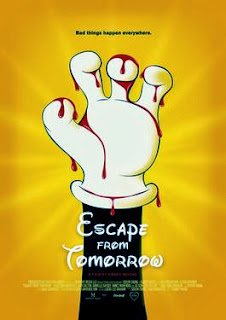