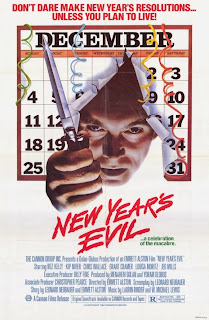 It is only fitting that New Year's Evil should be my first Census Bloodbath post of a long, hopefully slasher-filled year. I hope everybody is settling nicely into 2014 content in the fact that there's a bright shining ocean of opportunity ahead of us and that we haven't just been stabbed repeatedly with a switchblade.

New Year's Evil, one of the very first holiday themed slasher films (to my knowledge, it was only preceded by Christmas Evil a month before and To All A Good Night in January 1980. And of course Halloween in 1978 and Black Christmas in 1974. Neither of which really had much to do with the holidays they took place on.), has the unique advantage and disadvantage of being released in 1980.

This was the year the slasher was born, so the slice-n'-dice films that came out this year weren't beholden to the sort of rigid structure slashers of a couple years down the line pretty much had to adhere to. This is a great benefit in the sense that they're allowed to break the rules. Considering that the rules were still in the process of being invented, this was a pretty easy thing to do.

The problem is that these films were all trying to be something they patently weren't - good films. Or at least passable ones. By 1981, studios had it all figured out. They were trying to be Friday the 13th. But the flicks produced in this period didn't have that template to draw from and as such didn't lean back on great gore effects to support their flimsy narratives.

They tried to let the narratives speak for themselves like they were John Carpenter or some BS and that is not OK. Unless, of course, you're John Carpenter. But very few people are. 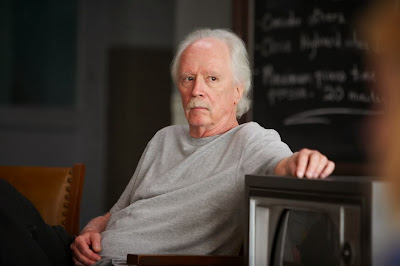 A quick experiment. Look at this picture. Then look at a mirror. Do they match? No? Then you are probably not John Carpenter.

(By the way, if you happen to be both 1) reading this blog and 2) John Carpenter, I am a huge fan of your work. Thanks for checking this out.)

However, despite a pronounced lack of satisfying gore, many of New Year's Evil's breaks from slasher tradition tend to make it slightly more interesting than a generic film with its same plot could have been. First off - we see the killer's face almost immediately, which is why I don't care about spoilers for this although we don't learn his identity until much later (not that it's not easy to figure out based on an early exchange).

And second - the man actually has social skills. He can speak, he can dance. He competently seduces women before he murders them, something a big lunk like Jason never could pull off. This is a double edged sword because this kind of killer has more in common with the ugly early 1980 slashers like Don't Answer the Phone and Don't Go in the House, but it also serves to make him more realistically threatening.

The man in question is one Richard Sullivan (Kip Niven), a regular looking man who is tormenting his wife Diane (Roz Kelly) as she hosts a massive New Year's Punk/New Wave telecast in Hollywood. And if you thought nothing could be more 80's than the end of that last sentence, check out this picture. 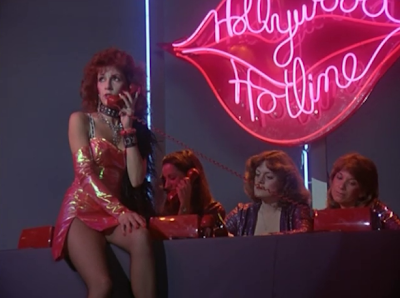 My Rubik's Cube is twitching.

Richard has disguised his voice with some sort of Darth Vader machine and calls the show claiming to be be called "EEeeeEEEevil," and threatening to kill one person every hour as midnight strikes in each time zone until Pacific Standard Time, when he'd come after somebody close to her.

After checking on her estranged son (estranged because she's a dick to him - ignoring his important accomplishments like getting a lead role on Spaceship America, a TV show that I fervently wish was real.) Derek (Grant Cramer in his first role in a career that would lead him to both Killer Klowns From Outer Space and Santa Claws), she calls the cops (one of whom is played by Chris Wallace of Don't Answer the Phone) and they decide that she should keep on trucking with the show until they can keep him on the line long enough to track him.

Pretty standard horror phone call stuff going on there. But the hourly nature of the killings keep NYE from having the typical slasher platter of Meat, instead opting for unconnected victims across Southern California including Jane (Taafe O'Connell), a sexy nurse who looks like Lisa Kudrow; Sally (Louisa Moritz), a vapid meditation enthusiast; and Lisa (Anita Crane in her only film role), her roommate and nervous diarrhea-haver (it's a long story). 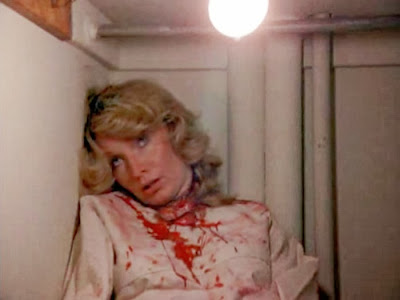 Whenever I get nervous, I spontaneously bleed from the neck.

The film trudges along alternating between midnight murder sequences and the show, which is essentially just a music video for a series of ear-splittingly shrill 80's rock groups so terrible that they must have been real. This is all mildly amusing but it doesn't quite get to "so bad it's good" territory (bread and butter for holiday slashers) until the final showdown when Richard has Diane tied to the bottom of an elevator that's about to drop.

"Enjoy your going away party. Get smashed."

Niven is fairly compelling as the face of banal evil and the film has enough breaks from standard slasher material to keep you on your toes, but there's not a lot to New Year's Evil. It's a great film to watch if you want to bathe in the vileness of early 80's fashions and music and it has some pretty exciting editing techniques at infrequent intervals, but for fans of slashers as a form, it's not quite up to the caliber of later pun-filled holiday bonanzas.

I'll never regret sitting through it, but I'm not champing at the bit to watch it again ever in my entire life.

Killer: Richard Sullivan (Kip Niven)
Final Girl: Diane Sullivan aka Blaze (Roz Kelly)
Best Kill: A girl is smothered with a bag of weed.
Sign of the Times: This film takes place largely at a Punk/New Wave concert, so the entire film is smothered in tacky cultural signifiers; Diane's drag queen make-up and cheetah print jacket; Yvonne's shell braids; every member of the audience's everything; it's like a Scissor Sisters concert gone wrong.
Scariest Moment: The ending is actually really good, especially with the implication attached to Honolulu's midnight celebrations.
Weirdest Moment: Every time Richard kills one of his victims, he accidentally leaves a single shoe behind. He's the freaking Cinderella of serial murderers.
Champion Dialogue: "You castrated me. And that is not nice."
Body Count: 7; including the killer - with an implied eighth.


TL;DR: New Year's Evil is a so-so slasher movie that benefits and suffers in equal measures from not adhering to formula.
Rating: 6/10
Word Count: 1171
Also sprach Brennan at 9:38 AM