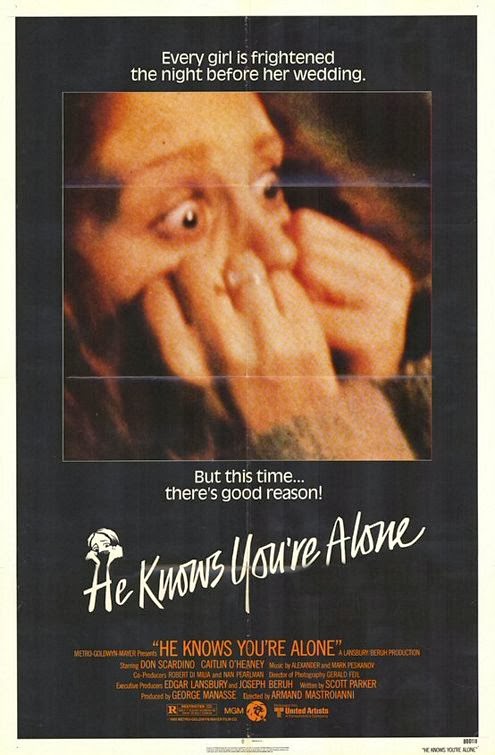 Finally, finally my next chronological Census Bloodbath post. Way back when, I decided to go through these films in order but at a certain point I got stuck and spent some time bouncing around and rewatching movies I'd already seen and knew I liked. Call me a creature of habit. And I knew next to nothing about He Knows You're Alone, the next film on the list, so that wasn't helping me get off my butt and commit.

I made a big mistake, because HKYA is actually a pretty great slasher flick in all regards. Well, maybe not everything. It's far from perfect, but it's perfectly delightful. It's just the breath of fresh air I needed from 1980 after a long slog through the mirthless pre-Friday the 13th grindhouse holdovers.

This is obvious from the very first scene, a movie theater death sequence later cribbed for the opening of Scream 2 (a review of which is pending, appropriately). 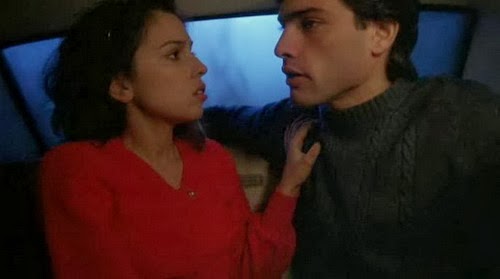 A brief sidebar to discuss how the movie that's playing features Russell Todd aka the studly Scott in 1981's Friday the 13th Part 2.

Two girls are watching a scary movie and one of them is stabbed by a fierce-looking fellow at the same time as the girl in the movie shrieks her last breath. One overexposed freeze frame later, the title (in all red of course) bursts onscreen over the image of the killer's crazed eyes. 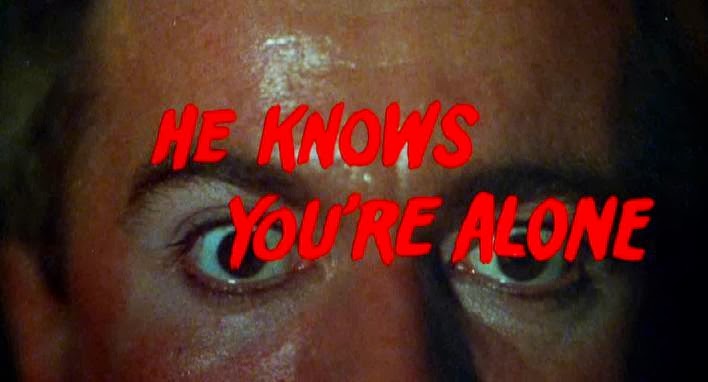 And stab me, but that's a great title.

So here's as much backstory as we get, and it's all we need. Ray Carlton (Tom Rolfing) was jilted by one of his lovers, whom he stabbed on her wedding night. Her fiancé, Detective Len Gamble (Lewis Arlt) has never recovered and now that a new rash of killings is occurring in town - all engaged women - he gets the sense that he knows the culprit... and can finally enact his revenge.

However, the main focus of the movie is the romantic exploits of three women: Amy Jensen (Caitlin O'Heaney) and her friends Joyce (Patsy Pease) and Nancy (Elizabeth Kemp). Amy is engaged to Phil (James Carroll, also of Girls Nite Out), presumably because he is a philandering dickbag who embarks on a Bachelor's Weekend at the beginning of the film, hardly even attempting to disguise the number of skanks he'll be picking up along the way.

Oh, and did I mention he wants her to quit school and forget about a career? The Patriarchy called, they want their poster child back. To make things even harder on her, her adorable morgue worker ex-boyfriend Marvin (Don Scardino, who has since made a name for himself directing episodes of 30 Rock) is very actively pursuing her affections - and she adores him. She's just not super pleased with the whole "I touch dead bodies every day" thing. 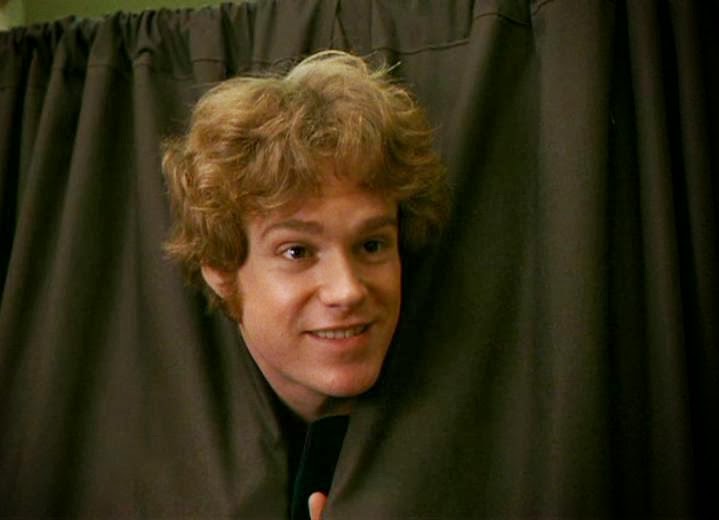 But he has sideburns for days.

And then there's Joyce, the sexed-up biddy who's sleeping with her professor (James Rebhorn) to get an A. And Karen, the shy best friend who has a crush on local jogger Elliot (wait for it... Tom Hanks).

In the vein of Halloween, the film is largely bloodless so the bulk of the film's entertainment value falls upon these players. And it absolutely works. The characters are of a piece completely likable and charming protagonists. Except Phil. Douchebag.

But enough with the gender roles (my copy of Men, Women, and Chainsaws has got me going again).  He Knows You're Alone is a film that wears its influences on its sleeve (the death scenes are all lifted from Psycho and the music is an impressively precise mathematical achievement - exactly as close to the Halloween score as a single piece can get without actually being the same thing), but does so in a way that is enhances the unique story it's already telling. 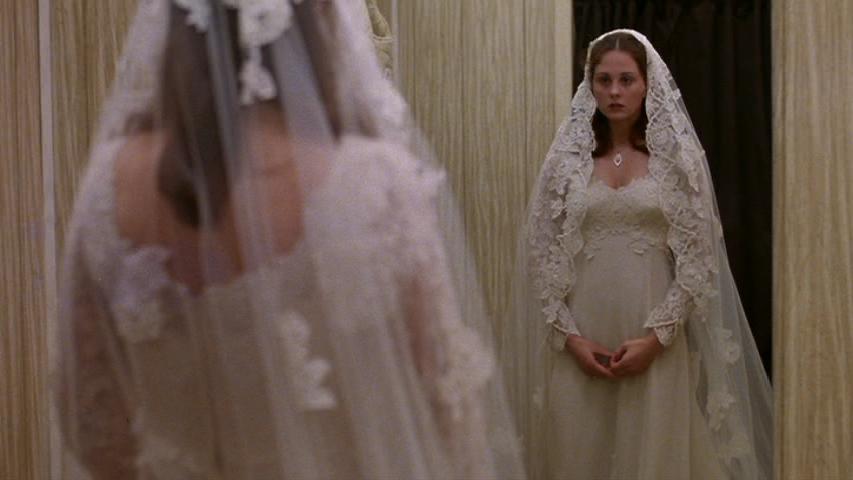 College students in wedding dresses aren't exactly a mainstay of the slasher movement.

The doubt and internal turmoil Amy is facing about her impending wedding is mirrored in her external life as Ray begins stalking her through town and killing off anybody who gets in the way. But forget that, because the love triangle thing honestly has me hooked. I am Team Marvin all the way. That guy's the best.

Perhaps it's not the best slasher film because its best scenes are generally the non-horrific type, but there's enough cheesy 80's signifiers and tawdry horror tropes to keep the genre faithful happy. It's like taking a bath in slasher plots - comforting and relaxing in their predictability, and they'll never let you down.

He Knows You're Alone is a hyperbolically undervalued film that I urge any fan of the slasher genre to check out immediately! It's not the scariest knife in the drawer, but it has the most engaging plotline I've seen so far that wasn't directed by anyone whose name rhymes with Schmess Schmaven. Don't let it die a lonely death! 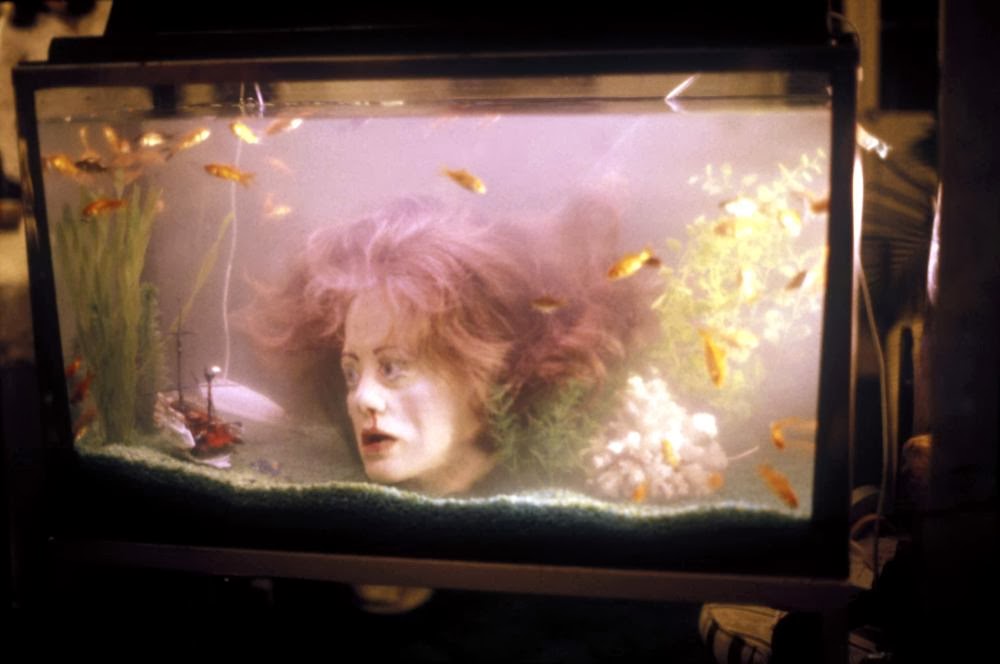 Sign of the Times: The word "zilch"; Cigarettes are 65 cents; Tom Hanks is a BABY.
Scariest Moment: The killer corners Amy in her home.
Weirdest Moment: When the cute jogger Nancy is talking about turns out to be Tom Freaking Hanks.
Champion Dialogue: "Marry me and I'll bring you a piranha."
Body Count: 8