Forgive me for my radio silence for the past couple days, my sleeping patterns have been like the Long Beach bus schedule this week - inconsistent and wildly out of sync with expectations. But the good news is I've had the incredible opportunity to be a PA for a nonprofit production headed by David Zucker, none other than the man who directed Airplane!, which is only my third favorite movie of all time!

It was a great experience and a good addition to my résumé, but my will to write - and my will to stay awake - has been dulled for the past couple days, so I'm gonna lay one on you to make up for it. Seeing as it's January and virtually nothing worthwhile is coming into cinemas, Sergio and I have spent the past couple days catching me up on a minor horror phenomenon of the early 2000's, a decade I am sorely lacking in, having spent so much of my time wallowing in the muck of the 80's.

Because he's a minor expert in scary movies of that time period after having gone through a brief horror phase himself (mine is much more persistent than his and refuses to go away any time soon), he deemed it wise to lead me on a journey through the Jeepers Creepers franchise, one of the few truly original horror creations of the Millennium.

It was an important gap to be filled, and I shall share my newfound knowledge with y'all. 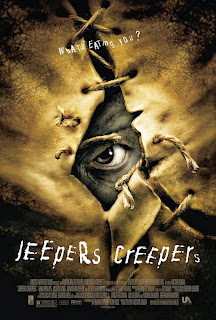 I see you eyeing Justin Long's name up there. For not a single second of Jeepers Creepers' 90 minute run time was I ever not focused on the fact that he's a Mac. The man's ageless, too. In fact he even looks younger during his brief cameo in the sequel. And I was not expecting what I saw in the scene where he takes off his shirt. All around, a very interesting casting choice after the fact.

But where does that leave the movie? Two college-aged teens, brother and sister Darry (Justin Long) and Trish (Gina Philips), are returning to their Midwest home via the Middle of Nowhere when their car gets buzzed by a junky looking van. After careening off the road to avoid being converted into a red smear on the pavement, they pass by the abandoned church where the van is parked and see a mysterious man dumping bodies into a chute on the grounds.

It turns out that this man is the Creeper (Jonathan Breck), an ancient demon that emerges for a period of 23 days every 23 years to feed. It likes to tailgate drivers on the freeway because it can smell their fear and use that to determine if they have a good part that he needs - whatever body parts he eats become reconstituted into his body, making him immortal.

All of this exposition is given to us by a Convenient Medium (Patricia Belcher) who has had psychic dreams about all of this. She also knows that whenever you hear the song "Jeepers Creepers," you'd better hightail your way out of there because 1) that's the title of the movie and 2) apparently the demon loves old lady music.

Honestly, most of this information dump goes absolutely nowhere, but it's unique and creative and in service to a sort of Nick at Nite horror narrative - demure gore that in no way deserves the R rating it's given attached to some surprisingly powerful scares with great use of deep focus cinematography.

It's atmospheric (perhaps a little too dark at times, but it serves to disguise the deeper flaws in the demon make-up and thus is a worthy cause) and sprightly fun in a way that the dull chalky horror of the time absolutely wasn't.

Salva's wise choice to make the characters brother and sister and eliminate any possibility of sexual tension serves the story well and allows for an unusually full exploration of the characters. Overall, definitely a film worth spending time on if you happen to catch it on TV or want a fun nostalgic sleepover night. 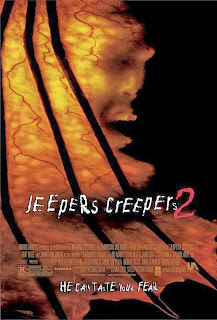 I was definitely excited for this one. Jeepers Creepers 2 didn't land on Cracked's Five Most Unintentionally Gay Horror Movies list for no reason. It's the 23rd day of the Creeper's (again played by Jonathan Breck) feeding spree and when a busful of teenagers breaks down on the highway in the Middle of Nowhere on the way home from winning a state championship in Sport (darned if I know what they play. I feel like it might be basketball, but there's absolutely no indication and they have a javelin on the bus so who even knows).

The first thing they do is lounge shirtless on the roof and pee together in groups all while accusing each other of being homos. You know. Like boys do. When night falls and all of a sudden their coaches are whisked away by a mysterious winged demon, things turn sour and the team ends up cowering inside the bus and frantically calling for help on the radio.

Right off the bat, Jeepers Creepers 2 has a much better concept, at least for my tastes. There's a bigger cast which allows for more interpersonal tensions and a higher body count. And the slasher tone keeps the camp factor high. The idea of being trapped in a single location greatly benefits the terror which was diluted in the second half of the original as Darry and Trish jetsetted across the Midwest. The mythology is put to better use as we see the Creeper actually picking out his victims and utilizing their resources. And there's like twenty shirtless boys. That is inarguably the most important addition to the franchise.

However, all of this is given in exchange for a pronounced lack of atmosphere or craft. There's still some nice deep focus and silhouette work in the opening scene and a dream sequence is particularly good, but for the most part the terror is completely overwritten by camp. Which isn't necessarily a bad thing in my book, but the original was one of the few even mildly scary films of its time, so it's somewhat of a disappointment.

Jeepers Creepers 2 also suffers from being exactly one Hella too long. Although the camp elements (especially Evil Leapfrog and the closing scene) serve it well, it can't muster enough steam to keep it from limping to the finish by the third act. However, it too is a great party film. Especially if you have a bunch of friends who don't mind you loudly making jokes the entire time.