Census Bloodbath: The Man In The Mirror 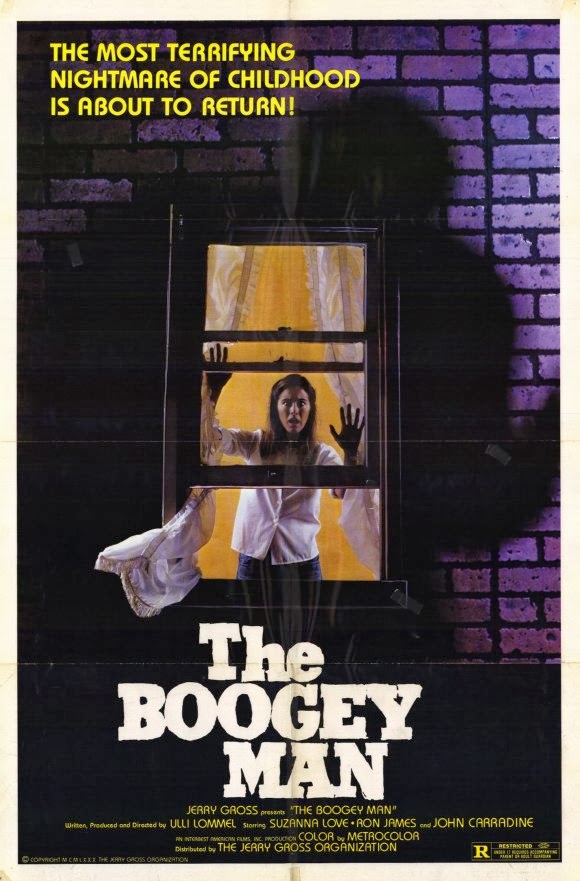 The Boogeyman is a peculiar little trifle of a film. In fact, it's almost impossible to describe with the slasher terminology of 1980 as it stood although it is undoubtedly a member of the genre. At a spritely 82 minutes, it's a crackerjack shocker that's at once interminably dull and delightfully bizarre.

It opens with the most brazen Halloween riff yet, in which a mother (Gillian Gordon)'s two children spy on her as she gets it on with her lover (Howard Grant). The lover catches them and beats the young son. One Steadicam shot later, the son is stabbing him to death as his sister watches from around the corner via an ornate mirror.

This entire sequence is bathed in soft colorful light that implies an actual brain behind the production before it cuts to the present day and everything is boring again. 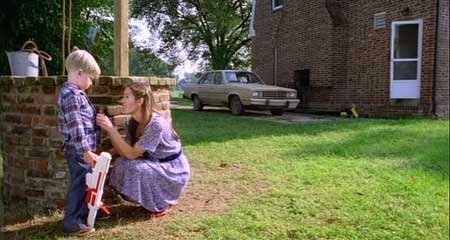 Although at the very least it's visible, which is something I've learned not to take for granted.

It's twenty years later and the sister Lacey (Suzanna Love) has married a nice blonde policeman (Ron James, something of a Walmart brand Midnight Cowboy) and popped out an irritating little tyke, Kevin (Raymond Boyden). Although things have changed a lot since those days and they now live on a remote tract of farmland, Lacey and her brother Willy (Nicholas Love, Suzanna's real life brother) are still haunted by the events of that night.

Willy hasn't said a single word since he stabbed the man in another obvious Halloween-y touch. And for a while we watch the family interact, not really encountering much in the way of "plot" or "entertainment" for the first 40 minutes or so. There are brief flashes where the direction or the editing is actually worthwhile, but the overall impact of those moments is negligible.

It isn't until about halfway through the film that Suzanna visits her old home and shatters the mirror to pieces during a vivid hallucination and the real fun begins. Where, up til now, The Boogeyman has adhered fairly closely to the Michael Myers mythology (up to, and including the title), all of a sudden a gasket bursts somewhere and the whole thing is sucked into a vortex of insanity.

The breaking of the mirror has released the spirit of the murdered man trapped inside of it and he begins to kill the new inhabitants of the house in a way that's half Final Destination, half The Happening, and all crazy go nuts. 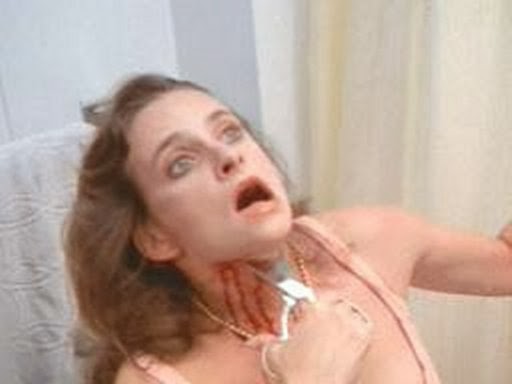 When this is the most logical scene in your movie, you've done something very wrong or very right.

The film careens wildly across subgenres from high concept supernatural thriller as the mirror glows red and turns household objects into murderous missiles to straight-up slasher in a tacked-on lakeside teen slaughter scene obviously thrown into the mix after Friday the 13th hit it big until it settles on being an exorcism movie in the darned weirdest way possible.

Basically, wherever the shards of the mirror end up, terrible things happen. There are several wild and hilarious scenes in this back half and the ending is a ludicrously self-indulgent cacophony of colors and noise and nonsense and it's all pretty great. Theoretically. Although it's a joy to watch these scenes, there's still something missing.

It all feels very Slash By Numbers, put together without any real care that the end product is anything worth seeing whatsoever. Even in the most preposterous and campy moments, there's an unmistakeable tinge of shallowness that dooms the entire picture. 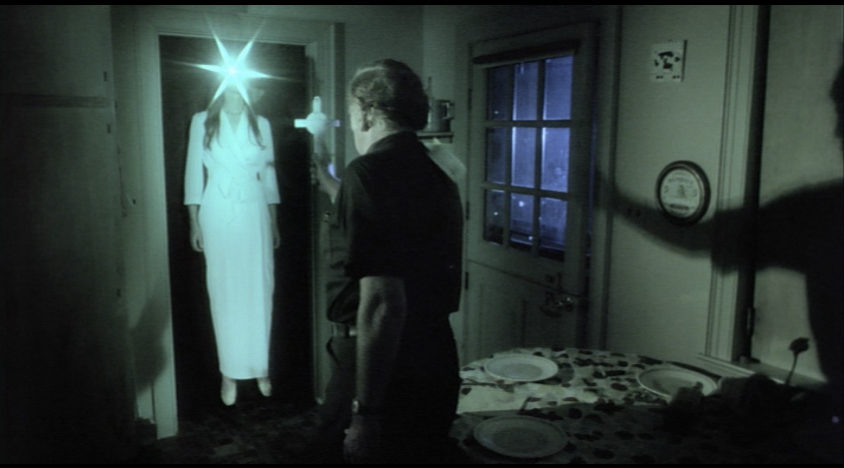 Yes, even when John Carradine holds out a crucifix to a mirror shard-possessed Lacey.

The back half does tend to make up for some of the draggier bits in the beginning but the whole thing evens out to a perfectly bland and uninteresting film. It's even more disappointing for the crazed fun the film could - and should - have been.

And by all accounts the two sequels are even worse. Obviously having given up on the concepts of artistic integrity or narrative quality, both Boogeyman II and Return of the Boogeyman clock in under 80 minutes and are largely comprised of stock footage of the original film. Definitely expect reviews if I can ever get my hands on those (understandably) rare cuts.

Director Ulli Lommel (who helmed 17 serial killer pictures in four years) was never a name brand auteur, but his close relationship with master director Rainer Werner Fassbinder was supposed to teach him the tricks of the trade. By all evidence, it did not. But at least his ideas (in the back half of the film, anyway) were unique in the fairly barren terrain of Psycho and Halloween knockoffs that was the slasher genre at the beginning of the decade.

But The Boogeyman is not a pet project. It is a charmless seat filler that unfortunately made yachtloads of box office off of its $30,000 budget. Utterly passionless with only a few stabs at cinematic craftsmanship, it's ultimately trivial and forgettable. 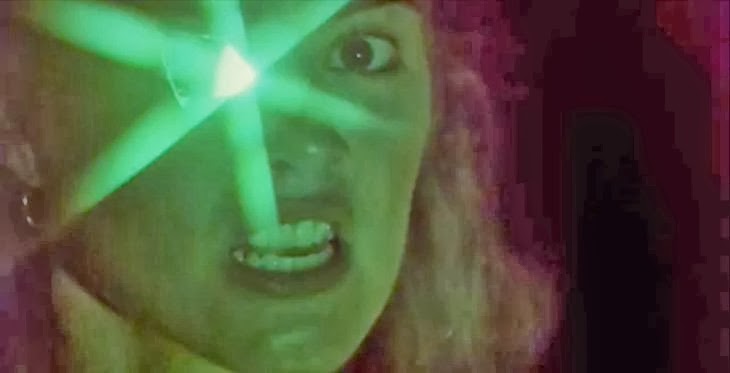 And it's no coincidence that it starred his (then) wife. Spill that tea.

Killer: A mirror infused with the murderous spirit of their mother's Lover (Howard Grant)
Final Girl: Lacey (Suzanna Love)
Best Kill: A young man is skewered through the back of his head and his girlfriend is pulled onto the front, locking them in an eternal lip lock of death.
Sign of the Times: Everything eventually either catches on fire or explodes.
Scariest Moment: A girl holding a vibrating shard of mirror can't let go and it cuts into her fingers.
Weirdest Moment: A random buck-toothed character named Katy (Catherine Tambini) shows up to ask Willy for eggs, tries to seduce him, gets strangled, and runs away never to appear in the movie again. Predictably, Willy says nothing.
Champion Dialogue: "As long as I've known you, I can't keep in mind you don't talk."
Body Count: 9; including the Lover in the beginning.


TL;DR: With a better concept than execution, The Boogeyman is a disappointment but still is an interesting one-of-a-kind curio for more devoted fans of the genre.
Rating: 5/10
Word Count: 1113
Reviews In This Series
The Boogeyman (Lommel, 1980)
Boogeyman II (Starr, 1983)
Also sprach Brennan at 4:00 PM