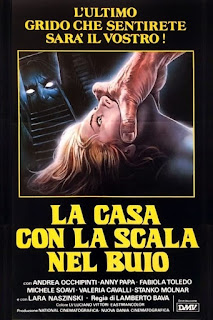 So, I may have built up A Blade in the Dark too much in my own head for a very ridiculous reason. Back when I was first researching Census Bloodbath, oh, eight years ago or so (Jesus Christ), I learned that this film with a pretty cool poster came out on my birthday in 1983. I bought the DVD pretty soon after that, and it has been sitting on my shelf gathering dust, waiting for the day to come to actually crack it open. Well, that day is today, and I was untenably excited to come full circle on this film.

Now, don't get me wrong. I pretty much knew what I was getting myself into. I've already had some experience with Lamberto Bava (the son of prolific horror maestro Mario Bava), with his promising but lackluster Delirium: Photos of Gloria from 1987. So when A Blade in the Dark turned out to be a bit of a dud, it's not like a piece of my soul had been ripped away. It was just mildly disappointing, although at the very least it's less of a dud than Delirium. 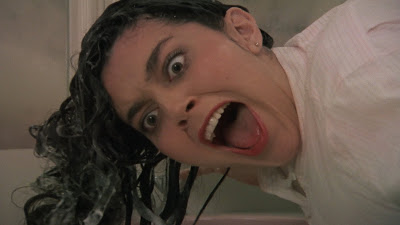 The things we tell ourselves to stay sane...

A Blade in the Dark follows the exploits of film composer Bruno  (Andrea Occhipinti of The New York Ripper), who is holing up in an enormous villa rented to him by Ted (Michele Soavi, Bava's assistant at the time who would go on to direct the excellent StageFright: Aquarius) while he works on the score for the thriller A Story of a Murder, which is being directed by Sandra (Anny Papa of Sweets from a Stranger, which we'll cover down in 1987). Incidentally, it's really cool that there is representation of women in filmmaking here, even though her presence is certainly borne from the impulse to have as many sexy ladies around as possible.

Before too long, some of the other sexy women who drop by for no particular reason go missing (we know they're being murdered by a woman with a shadowy face, but he doesn't), and he realizes that something mysterious is happening with the villa, perhaps having something to do with the former tenant Linda. 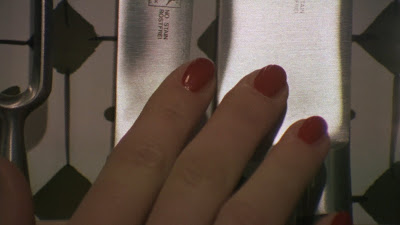 Well whoever it is, they know how to rock a bold red.

A Blade in the Dark is essentially a tug of war between visually satisfying filmmaking and really stupid everything else. And "everything else" is the winner. However, when the film's aesthetic perks up (which occurs almost exclusively during its kills), it's pretty damn impressive. The murder setpieces are glorious, reveling in their own brutality and refusing to end, just rubbing your face in madness and visual splendor, sending a shiver up your spine with the slow click of a box cutter being readied to slice or startling you with a grotesque close-up.

You could splice any three minutes of murderous mayhem from this film, and anyone with a bit of a gorehound streak would immediately want to check out the rest of the movie. Don't let them. This is a mistake. For one thing, these moments are doled out with hellish slowness. Of the six murders in the film, four are crammed into a short period at the end of this film that the overlords of Hell decided should be 108 minutes long.

Some of the moments that fill space between kills (this was originally designed as a four-part TV miniseries with a murder at the end of each episode, and it shoooooooows) are at least amusing in a "holy shit, what were they thinking?" kind of way. The English language dialogue is tortured to within an inch of its life, and especially in any scene where Bruno first meets a new woman, completely off-kilter. Here are some choice cuts that didn't make the Champion Dialogue slot:

"I adore musicians, they're really great in bed. How are you in the feathers?"

"I have to say you're very perspicacious, because that's exactly what I was thinking." 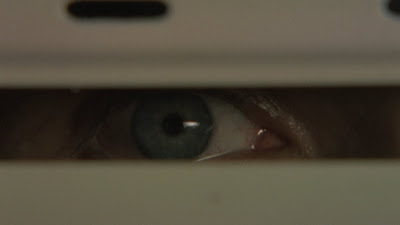 Pictured: The position I wish I was in while the screenwriters were penning this movie.

Unfortunately, the movie thinks it will excite us if it spends its time watching Bruno slowly march down one dark hallway after another (after watching 195 slasher movies, the thrill of a hallway pales, I'm sorry to report). And when he's not doing that, he's sitting to his piano to play the one theme he wrote over and over again while he rewatches the one scene they shot for the film-within-a-film over and over and over and over and over. In fact, when we finally watch the much ballyhooed final reel of the film, which the director wants to keep a secret and which may hold the clue to the killer's identity, it's just that exact same scene with two seconds of extra footage.

Likewise, when the script turns its attention from resplendent absurdities to the actual plot, it's dishwater dull. It is extremely clear what the ultimate twist will be, and all the obvious red herrings (including a weirdo groundskeeper with a murder scrapbook - it's never the weirdo groundskeeper with a murder scrapbook). Here's a hint for guessing the ending of an 80's slasher movie: If there's an opportunity for the killer reveal to go down a transphobic route, it will take it.

Yup, the killer is a man dressed as a woman (complete with a vigorously ill-researched and offensive psychological explanation for his murderousness). I'm too exhausted by this trope to even muster much steam about it at the moment, especially considering that if you want to watch an actually interesting transphobic slasher from 1983, Sleepaway Camp is just sitting right there.

Killer: Linda AKA Ted (Michele Soavi)
Final Girl: Bruno (Andrea Occhipinti)
Best Kill: Angela's murder is brutal as all get out (see below for full details), but the clincher is that it begins with her hand being impaled with a knife, trapping it to the counter. As she struggles, the knife slowly splits her hand down the middle, and damn if that didn't make me curl up into a little ball.
Sign of the Times: Bruno says he won't have time for Ted to come listen to him play, but he can record him a cassette!
Scariest Moment: The killer attempts to stab Katia with a box cutter while she hides in a narrow space protected by chain link. The chain link prevents the box cutter from fitting all the way through, but it waves millimeters from her face.
Weirdest Moment: When investigating, Sandra and Bruno find a trunk full of tennis balls in the basement.
Champion Dialogue: "Is it possible you're such a vacant nerd? Your satisfaction is to sit like a frog in the sun?"
Body Count: 6

TL;DR: A Blade in the Dark is yet another pretty but underwhelming giallo clone from Lamberto Bava.
Rating: 5/10
Word Count: 1241

Also sprach Brennan at 9:15 AM