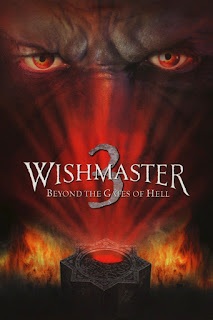 Remember that precipitous drop in quality we narrowly avoided last time? Well, here it is. After somebody actually put effort into the made-for-TV Wishmaster 2 (I'm sure they had their reasons), the franchise got farmed out to Canada and director Chris Angel, who is notable only for not being Criss Angel. That's at least one point to his credit. Today's topic, Wishmaster 3: Beyond the Gates of Hell, was filmed back-to-back with Wishmaster 4 in Manitoba (there was literally one weekend separating production of the two films). And now here we are reviewing it some decade and a half later. I think I've already put more effort into watching this film than anybody did into making it. 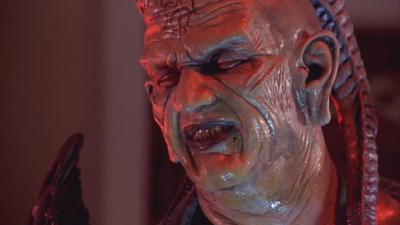 The process that brought us Sleepaway Camp II and III couldn't possibly go wrong, could it?

The Wishmaster movies have never really had a consistent setting, so why not set it on a college campus? History student Diana Collins (A.J. Cook of Final Destination 2) is dating a schlub named Greg (Tobias Mehler) and has trouble saying "I love you" because her parents died in a car crash or something. Character motivation is fun, y'all. Anyway, she is volunteering at the campus museum and discovers the key to an ancient Persian puzzle box. Yadda yadda glowing gemstone, yadda yadda grant three wishes to the waker, unleash Armageddon. We get it. The Djinn this time is played by John Novak because Andrew Divoff hated the script so much that he walked from the project. Might I remind you that this is a man who said yes to a film featuring an old woman crapping out coins on the floor of a casino.

Because make-up work wastes precious hours and we're making this movie in about the same time that it takes to print the poster, the Djinn mostly takes the form of lecherous professor Joel Barash (Jason Connery, who is in fact Sean Connery's son). He spends the first half of the movie playing phone tag with Diana, granting wishes to randos along the way and eventually making his way across her group of nubile teen friends. 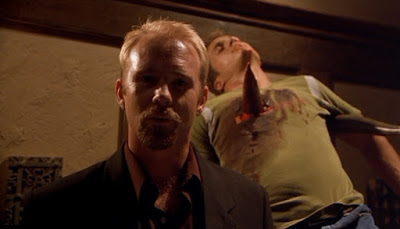 This is how it works, Billy. Sorry not sorry,

First things first, the Djinn sucks. The makeup is a huge step down (I assume it's mostly just a prosthetic headpiece they jam onto poor John Novak), and while I never thought I'd be missing Andrew Divoff, this film proves he brought a spark to the character. A spark that can't be recreated with an SNL-level impression. I could work with this pale imitation of the Djinn if he actually did anything, but the boundless creativity of the franchise hits a wall. Hard.

These movies have always had really tortured dialogue when the Djinn tries to squeeze wishes out of people, but there's no amount of twisting words that can change a wish for two women to be in love with you to topless zombie ladies biting out your tongue. It's not even lowest-common denominator clever, it's just lazy and insipid, going through the motions of a franchise nobody was really ever asking for in the first place. There are only two death scenes worth a lick (Billy's impalement, as pictured above, and a really brutal, grotesque moment where the mean girl who wished to lose weight is vomiting up all of her insides), and the rest are cheap, awkwardly executed pablum.

The script attempts to make up for the lack of creative kills by finally embracing the post-Scream meta humor that was dominating the teen horror market (at least a year too late, might I add), but these sad, painfully unfunny grasps at relevance ("These exams are gonna be murder!") are really the nail in the coffin. A coffin with he will sadly rise out of sooner than later.

Wishmaster 3 briefly wins back my favor by going completely batshit insane for about 15 minutes Spoiler alert: the literal Archangel Michael becomes a character, possessing the body of Greg and wielding his flaming sword of angelic doom. But the daffy Act 3 decisions (there's also a sequence set in the campus graveyard - you know, standard college campus location work) aren't enough to redeem a painfully tedious film. By the hour mark it was my fervent wish that the movie would end as quickly as possible. I should have learned to be careful what I wish for, because the climax is devastatingly perfunctory.

There is practically nothing redeeming about this film. It's not even worth looking at, with its daytime scenes (of which it has altogether too many for a film with makeup this shoddy) blasted with an eye-searing lighting scheme that makes it legitimately hard to even see the characters, they're so washed out.

The sad truth is that I've still seen worse, so I survived the process of watching this with my wits pretty intact. It least it has a coherent plot. It's not worth following, but it's followable, which is something I've learned not to take for granted. It's in the literal sense a diversion. You can pay attention to it if you have nothing better to think about at the time. But I almost always have something better to think about, as I'm sure do you. Even if that thing is just Wishmaster 2.

...Next week is gonna be rough, isn't it? Do you think there's any chance Chris Angel got mentored by Steven Spielberg or something during that weekend between movies? Wish me luck. But make sure there aren't any Djinn around to hear you.