Be Fearful What You Wish For 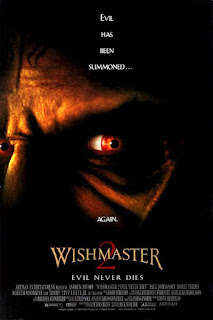 Usually when horror movie sequels get subtitles, that's when you need to keep an eye out. They're not always bad. But when Halloween II gave way to Halloween III: Season of the Witch, things got so wild that the film was disowned by the horror community for decades. There's something sublime about the simplicity of a Texas Chainsaw Massacre 2 or Exorcist III rather than Leatherface: Texas Chainsaw Massacre III or Exorcist II: The Heretic. It's not a hard and fast rule, to be certain, but I can't say I was incredibly optimistic when I learned that Wishmaster succumbed to the fever immediately, delivering Wishmaster 2: Evil Never Dies the second that Hollywood uncorked the franchise bottle. 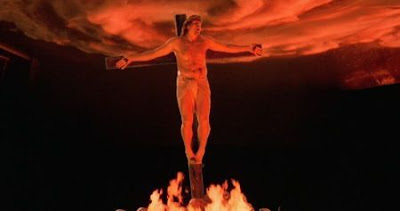 I truly am a martyr to these franchise horror movies, you're welcome.

Wishmaster 2 begins in a place I legitimately could have never predicted: an art heist. Morgana (Holly Fields) and her boyfriend Eric (Chris Weber) rob the local museum, in the process releasing the ancient Djinn (Andrew Divoff) we've come to know and love when Morgana smashes the crystal that held him. Eric dies in the escape, but the Djinn, in human form, takes the blame for the heist and is sent to jail, where he sets about granting wishes for the prisoners and collecting the 1,001 souls he apparently needs before he can grant Morgana three wishes, thereby unleashing the Djinn dimension upon the world. As if the mythology of the first movie needed to be even more complicated.

Anyway, all this sends Morgana into a moral crisis about the choices she's made in life, and she runs into the arms of hunky goatee priest Gregory (Paul Johansson), who turned to the church after she chose Eric instead of him. They work to learn more about the Djinn and how to go about destroying him. 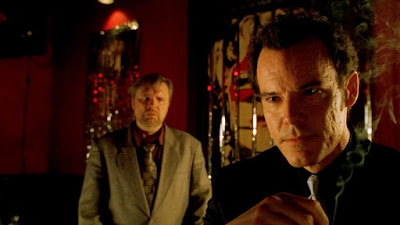 Meanwhile, Andrew Divoff gets a chance to work on his Godfather impression.

Wishmaster 2 was helmed by Jack Sholder, a director who seems to be stuck as Wes Craven's clean-up hitter, considering he also helmed A Nightmare on Elm Street 2: Freddy's Revenge. I can't help but imagine he feels the same way, because that film - and its highly publicized homoerotic overtones - seems to be weighing heavily on his mind. At least, that's the only explanation I can come up with for why this film is so hideously homophobic. Even for a film set in a prison, the sheer amount of F-words flying back and forth is... shocking. It feels like a grotesque overcompensation, and the only scene that helps me feel better about the whole affair is a scene where a prisoner wishes that his shady lawyer would "go fuck himself." This results in him literally having sex with himself, which he does in fact seem to enjoy.

Visibility is so important, y'all.

Generally, the wish scenes are about as satisfying as the original film, though the leading questions the Djinn is forced to ask to eke requests out of people are even more strained and ludicrous. Wishmaster 2 never captures the sheer, indulgent mayhem of the original's third act, but there's still a solid sense of fun to the proceedings (minus a truly atrocious joke in the climactic casino showdown, where a lady at a craps table literally craps hundreds of slot machine tokens out of her ass). And while the effects are hardly at the level of KNB's previous contributions, they are delivered with no small amount of gooey zeal by future Sharknado auteur Anthony C. Ferrante. 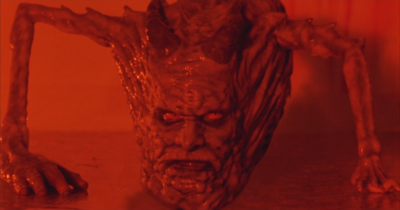 This stuff one can find on IMDb is wild, folks.

The only place where the DTV effects budget really shows is in the Wishmaster himself. We're getting a lot of Andrew Divoff face time in this one, and when he shows his true face as the Djinn, it's a lot more plasticky and immobile than last time. Rather than resembling an actual organic organism with a dripping, twitching carapace, it just looks like some dude's Wishmaster Halloween costume.  A very expensive Halloween costume, but still.

Beyond the effects setpieces, sadly, Wishmaster 2 has almost nothing to offer. The protagonist is even blander than the last time, a feat I didn't think could even be possible, and her inane thrashings that are intercut with every effects scene are even more irritating for it. Plus, this business with the priest lands the film in some deeply vexing sub-Exorcist territory. Down to the score (an airy interpretation of "Tubular Bells" by somebody who's clearly only heard it once, years ago) and the method of defeating the villain (repeating the same phrase over and over and over again until everyone at the slumber party watching this VHS tape has passed out from exhaustion), this film transparently aspires to Exorcist-level greatness, not realizing that all the hot air it's blowing about God and purity and prayer are a needless distraction at the absolute best. 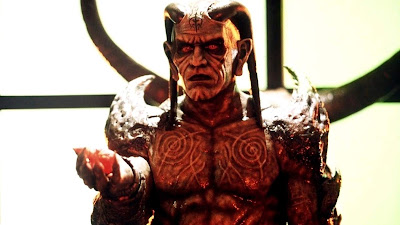 Catholic imagery permeates the film to the point that even the Wishmaster seems perplexed by it. He's literally not a Christian figure, and his attempts to explain this fall on deaf ears.

Morgana's plotline is frustrating tedium. No matter what she does, we must see it repeated three times in three consecutive scenes before we can move on. Same goes for the Wishmaster, but at least he's turning people into goo in the process. But, dear God, the moments with him that go for myth-building or menace rather than gore fail miserably. Let me paint you a picture. At one point while our protagonists are preparing to head over to his lair, we cut to him sitting in a chair. He spins toward the camera, makes his magic gemstone appear in his hand and then disappear, at which point he says "Magic..." He's alone in a room! Who is this for?!

This film was clearly not thought through one tiny bit, and it's buoyed only by the mild amusement of seeing Wishmaster perform his dirty deals in new locations (the prison yard and later a bar run by the Russian mafia for some reason).

But hey. There's always a quality drop-off point in my franchise marathons, and considering that the Wishmaster franchise only ever stretched to four films, I was nervous they would condense their timeline and fall straight into the gutter immediately. Luckily, that was avoided, though being a big step down from the already mediocre original doesn't really leave the film in a great place regardless.