Cardboard Science: Prisoners Of The Wind

It's October, which means it's time for our annual crossover event between Popcorn Culture's Census Bloodbath and Kinemalogue's Cardboard Science! My good internet friend Hunter Allen has assigned me three more 50's sci-fi flicks and you should head over there later this month to catch his thoughts on my three 80's slasher picks! 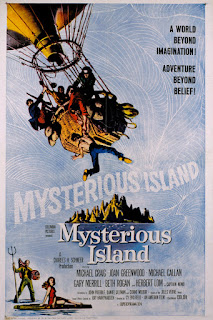 Evidently, the constraints of Cardboard Science are less strict than Census Bloodbath (I'd love to thoroughly break down more slashers outside of the 80's, but 400 titles don't need to be added to), because this month we're briefly slipping out of the 50's to tackle a movie that, one year after Psycho, just doesn't really feel "genre" anymore: It's Mysterious Island (the lack of a "the" is continuously confounding to me), based on the Jules Verne story that also gave us 2012 Dwayne Johnson vehicle Journey 2: The Mysterious Island. 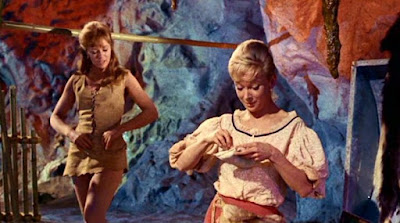 Perhaps I'd have been better off watching that one. Who can say?

Of course, eventually two shipwrecked women - Lady Mary Fairchild (Joan Greenwood) and her niece Elena (Beth Rogan) - wash up, and of course the male servant they had with them died in the process. I can't think of a worse place for two women to be in the 60's than stranded with a bunch of male soldiers, but they seem to make it work and the ladies both find themselves suitable partners in Spilitt and Brown respectively. Oh, and eventually they discover another denizen of the island, a mysterious Captain Nemo (Herbert Lom). This isn't a spoiler because the opening credits proudly announce his presence, a good fifty minutes before he shows his face onscreen.

Oh, and also there's some giant monsters prowling around the island. 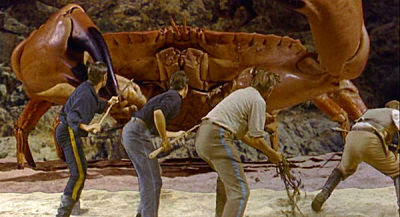 More on that later.

So, the opening credits. (Yes, this review is gonna get really granular.) You know credits, right? The part where the names of the people who worked on the film slide across the screen? Well, this movie doesn't seem to have ever seen a credits sequence before, because instead of politely arranging the names atop a crashing ocean backdrop like any other 60's island movie might have, we get a relentless cacophony of color. The ocean background is filtered into oblivion in a half dozen Day-Glo colors, with the credits in alternating stripes of different, equally obnoxious hues. When green over purple is the easiest combination to read, you know there's a problem. It's a hideous display that actively reduces the amount of information the audience is able to receive, which one would think would be the opposite of any movie's intention.

Nothing in the film is worse than this (how could it be?), but I think the credits speak to a deep problem with the entire project. Not a single ounce of forethought was put into the way they could make this appear as a coherent whole. If Mysterious Island is a Lego set, it was assembled by a blindfolded child with no instructions. Random plot points jut out from the center while others are elliptically rushed by without a passing glance, to the point that the monstrous contributions by Ray Freaking Harryhausen feel even less than an afterthought.

It's really obvious when Mysterious Island remembers that there are giant monsters roaming about, because about once every 25 minutes they chuck one in, to the shock of all the characters who have also forgotten there are giant monsters in the middle of their island survival adventure. We spend 75% of the film watching them fashion sexy Gilligan's Island cosplay and spruce up a cave, but not prepare to deal with the horde of monstrous and violent creatures they periodically have to defend themselves from. It's implied that the women have lived there for months and none of the men have even mentioned fighting a giant crab at one point. Plus, the monsters are provided by Ray Harryhausen, and while they're not his best, they're certainly a delight. Which makes their sidelining even more infuriating. And then, later on, the movie has the gall to assume we will be afraid of pirates showing up when there are literally giant bees like eight yards from their house. 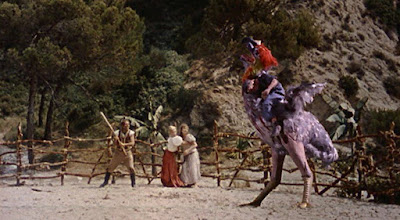 Side note: for a supposedly deserted island, it certainly gets a lot of tourist traffic.

Mysterious Island is very concerned with the process of survival, so we get a lot of hunting for food, fashioning huts and primitive weapons, and exploring the terrain. This would probably be interesting if it was an adventure movie from the 40's before we'd already seen 8 million similar narratives. This movie has elements that make it stand out from the generic Robinson Crusoe model, but the fact that it seems to actively want to ignore them means it relies on a lot of truly boring material instead.

But that said, I will not complain about a bunch of shirtless men being friends on an island. Before (and even after) the women show up, it's an alluringly homoerotic tale of men being stubbly and barrel chested, struggling for dominance via gravelly voice-offs and intense stares. I'm not sweating, you're sweating. Unfortunately, neither monsters nor men are enough to unsink this film from the choppy waters of insipidity. I didn't hate watching it, but I wouldn't be so bold as to recommend it to anyone else.