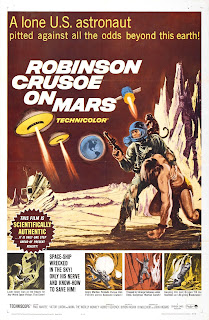 This week's continuation of our crossover with Kinemalogue's Cardboard Science finds that Hunter has once again assigned us a sci-fi movie from the 60's rather than the 50's. I don't blame him for not being as strict on the years as my Census Bloodbath project, but I can't help but feel that if this movie had been released a decade earlier it would be a clean 40 minutes shorter. And I can blame him for that.

If it's any consolation, these effects would have looked WAY worse in the 50's.

This week's assignment is Robinson Crusoe on Mars, which is an appropriate double feature with Mysterious Island, updating that film's tale of stoic male survival into a more traditional sci-fi milieu. Really, it does exactly what it says on the tin. Commander Christopher Draper (Paul Mantee) is stranded on the surface of Mars when a celestial event forces him and his Colonel, Dan McReady (the Adam West, in approximately three total minutes), to abandon ship. With only a monkey named Mona for company, he must learn to survive on the hostile Mars terrain.

Eventually (extremely eventually), he discovers other life forms, namely an alien race of miners that uses their ships to keep a horde of humanoid slaves from Orion in line. One of these slaves (Victor Lundin) escapes and Commander Draper befriends him, names him Friday, and teaches him English. 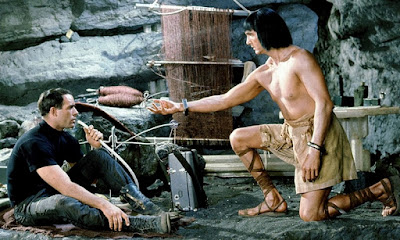 One, and exactly one, thing I love about these survival movies is how un-self-consciously masculine they are, constantly tripping into a deep well of homoeroticism that I'm sure they would be mortified by. The boundless tropes of American machismo roll over and across one another in an ecstatic parade of shirtless men bonding, swimming, and feeding each other (and I quote, "You're gonna learn English if I have to sit on your chest for two months."). But as for anything that's intentionally placed in the text... Well, I could take it or leave it.

It doesn't much help that this screenplay was provided by one Ib Melchior, the auteur behind such cinema classics as The Time Travelers and Reptilicus, both of which have been ripped apart by MST3K. While I can be delighted by the fakey science that fills these types of movies, there's really not a lot of dramatic heft to discovering that burning space rocks releases oxygen, and this is the tedious stuff that fills the first three-quarters of the movie before it politely commits to going completely batshit insane.

At least there was some effort put into the movie beyond the script. The sets are well-crafted and transportive, for one thing. They may look a wee bit artificial or old-fashioned, but that actually helps them feel even more surreal and alien. Not for one second do you think about the fact that they had to film this on Earth. The craggy mountains, the cherry red sky, and the barren desolation feel distinctly unique (or maybe the fact that I've never been to Death Valley helps a bit). Plus, we're delivered some exquisite matte painting work late in the film that gives the setting an expansive, lonely beauty. 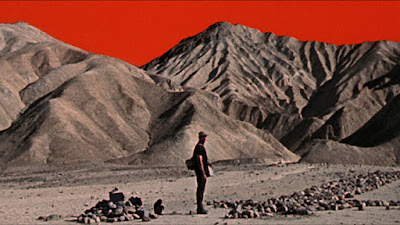 What can I say, this set rocks!

There's also a recurring element that I find fascinating. The astronaut's abandoned spaceship is still circling the planet, trapped in endless orbit. His salvation constantly flits by overhead, taunting him with its complete uselessness until it almost drives him to the point of madness. Madness that involves fashioning himself a pair of bagpipes as if he's determined to make the entire audience go mad as well!

There's also a remarkably creepy nightmare sequence in the second act that underscores his absolute loneliness. I almost wish it hadn't turned out to be a dream, because the uncanniness of it might have led to a far more interesting tale of extraterrestrial mayhem down the line, but I'll take whatever little tingles of the spine the film has to offer.

Unfortunately though, at the end of the day Robinson Crusoe on Mars lands in the exact same bucket as Mysterious Island. There are a lot of interesting elements scuttling around, but the movie chooses to foreground the most mundane and generic survival tropes. Plus, that nearly two hour run time completely embalms the drama, suffocating every last shred of momentum it could have possibly had. God, life in the 60's must have been so boring.