Cardboard Science: I Wouldn't, But Ed Would 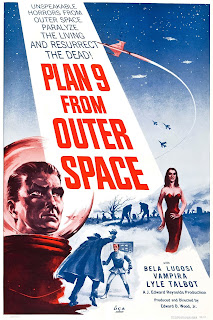 Our final entry in our crossover with Kinemalogue's Cardboard Science (I'm doing three of his 50's sci-fi movies and he's doing three of my 80's slashers) is a big'un. Among members of the bad-good movie glitterati, of which I consider myself a part, there are pretty much three huge pillars of best-worst movie, representing different decades and genres: The Room, Troll 2, and Plan 9 from Outer Space. These are the ones that regular civilians might have even heard of (once you get going is when you dive into the meaty stuff like Ben & Arthur or Fateful Findings), to the point that one of the most famous episodes of Seinfeld ("The Chinese Restaurant") revolves around them trying to eat in time to make a screening of the movie. Plan 9 is the only one of those I've never seen, so I was definitely looking forward to completing the unholy trinity. 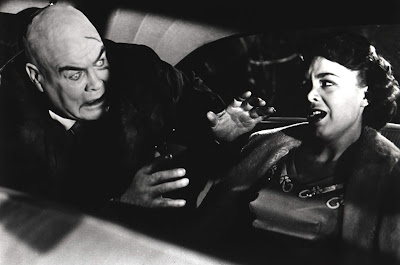 My hunger for this film was ravenous, one might say.

So, the plot. Insofar as there is one. Aliens are pretty nonchalantly flying their saucers around Hollywood and a nearby small town, trying to contact humanity. When humanity of course tries to blow the shit out of them, they decide to execute Plan 9, which involves resurrecting the corpses of the recently dead for... some reason. These dead folks are Inspector Clay (Tor Johnson), an unnamed Old Man (the late Bela Lugosi, as played by silent stock footage shot for a different movie that was never made), and the Old Man's Wife (Vampira, the horror host precursor to Elvira), whose youth and sexiness completely fail to square with her character.

Handsome hero pilot Jeff Trent (Gregory Walcott) and his useless wife Paula (Mona McKinnon) get caught up in all this as the zombies wander around not really doing anything, but sometimes strangling people offscreen. Apparently these three corpses are going to help the aliens destroy the world. Somehow. The aliens are worried that the warmongering human race, who has already split the atom, will learn how to split - and I quote - "the sun particle," and destroy the universe. 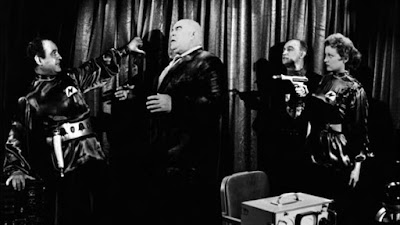 There are many elements of Plan 9 that are in the distinct arena of the "good-bad" epic. I've already mentioned the hilarious shoehorning of Bela Lugosi into the plot - his all too frequent appearances are mostly just him wandering through a field not interacting with anybody, alternated with shots of Ed Wood's wife's chiropractor with a cape over his face pretending to be him. And the frequency with which this film transitions from day to night to day again in the space of a couple cuts either belies gross incompetence or that the film takes place over the course of about 82 years.

Oh, and who could forget the alien spaceship, the interiors of which seem to have been shot in a high school cafeteria with curtains set up to look like walls. And, once it has landed, the exterior of which is clearly somebody's shed. Or the cop who scratches his chin with his loaded gun. Yes, there are definitely good reasons for this movie to be an iconic member of the bad movie pantheon.

Unfortunately, I've done enough of these Cardboard Science pictures that I don't feel entirely certain that the movie is remarkably bad among its peers. There's certainly an idiosyncratic shoddiness to its construction (thanks to Ed Wood's lusty amateurishness), but is this movie really any cheaper or worse than the effects in, say, The Giant Claw or It Conquered the World? I will give those films that their scripts are far more coherent (one scene in Plan 9 has the aliens lamenting that "Earth people who can think are so frightened by those who cannot - the dead," which I'm sure means something to someone, but that someone ain't me), but Plan 9 really isn't demonstrably worse when you weigh it all out.

There is actually some material that is quite good in Plan 9, mostly the gothic imagery of Vampira and Tor Johnson's zombified corpses wandering the cemetery. They are iconic, visually electric figures that do send a slight tingle of what feels like dread up the spine even though they really don't do anything. Johnson especially has an uncanniness to his physical performance that makes him feel entirely not of this Earth, and provides a huge distinction between his living and undead characters. 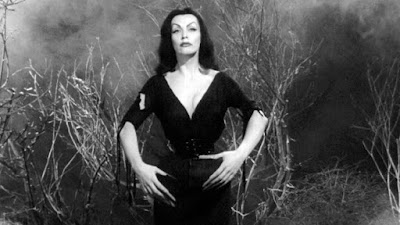 Plus I love a good horror vamp, and she's giving me exactly what I need.

On top of that, the shots of alien craft hovering over Old Hollywood are a huge hit of nostalgia, providing a naturalistic retro thrill that would make Once Upon a Time in Hollywood jealous. Other than the notably bad and the notably good, the movie is just plain old dull. Maybe I would have been more swept up in it had I seen it properly with a crowd, and not in my living room at 9:00 in the morning, but I didn't feel particularly compelled by it.

I might have liked it more if it was even worse, come to think of it. There was enough bad and good material here to maintain my interest, but not above the most basic, perfunctory level. I won't feel compelled to revisit this one unless I can see it at a screening with a devoted cult of its followers. I want to like it more than I do, but oh well. What are you gonna do. Happy Halloween?