I'd Trade My Soul For A Wish, Pennies And Dimes For A Kiss 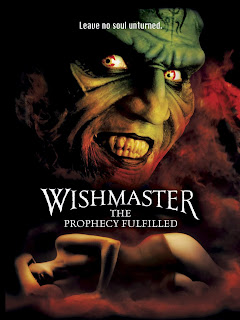 It's probably unfair of me to suppose you have committed to memory the production history of Sleepaway Camp II and III so let me give a quick recap. Those films were shot in one big chunk using the same crew, same locations, and same lead, then split into two direct-to-video movies in consecutive years. For some unfathomable reason, III is loads better than II, even though they had almost no time to reflect on their craft between productions.

I was hoping for the same thing with Wishmaster 4: The Prophecy Fulfilled, which was produced exactly one weekend after the abysmal Wishmaster 3, helmed once more by director Chris Angel. It's a foolish thing to dream that the miracle the movie gods visited upon the set of Sleepaway Camp would occur a second time, but you know what? My prayers were answered! 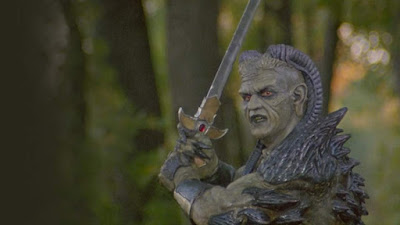 Good thing my prayers were not for Andrew Divoff's return, because THAT ain't gonna happen.

Wishmaster 4 opens with a bang. Literally. Young couple Lisa (Tara Spencer-Nairn) and Sam (Jason Thompson) move into a huge house they can afford because Canada, then immediately get to bonking their hearts out beneath the opening credits. It's a wildly lusty softcore scene to introduce a movie. At one point Sam starts thrusting so hard I thought he might turn into the Djinn then and there and split Lisa in half. Then, the cherry on top... A title card that reads "Three Years Later." Three years later than what?! We've done nothing to establish a timeline or any kind of narrative, we just watched some hotties bone down.

Anyway, now Sam is bound to a wheelchair after a horrible motorcycle accident, and Lisa is working on a lawsuit with the motorcycle company with hotshot pro bono lawyer Steven (Michael Trucco), who transparently has feelings for her. Sam's feelings toward her seem to have soured, associating her with the accident, and he compounds his shittiness by being outrageously jealous of Steven and assuming they've already slept together. As Sam pushes her away more and more, Lisa tries to resist Steven's advances but it's getting harder to do.

Oh yeah, and there's a Wishmaster. Michael gives her some sort of Ancient Persian rune thing as a present ("I know you like this stuff." Coulda fooled me, Steven.) and she releases the gemstone and thus the Djinn (John Novak, the only returning cast member). He kills Steven and takes over his body, then attempts to seduce Lisa into making three wishes so he can unleash the dimension of the Djinn upon Earth. He does this quite successfully until the third wish turns out to be about love, which is something his magic can't force. He then must convince her to fall in love with him to fulfill the third wish, but wouldn't you know it, along the way he might just be falling in love with her, complicating his world-domination plot. 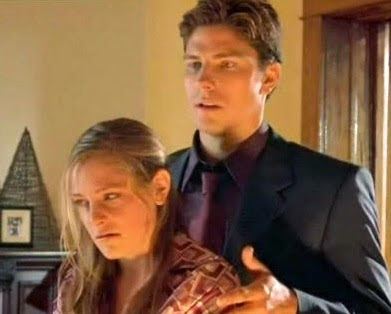 Twilight be damned, Wishmaster 4 has the TRUE relationship between undying monster and extremely bland girl who doesn't really deserve his attention.

There's a reason the Wishmaster doesn't show up until paragraph three. The Prophecy Fulfilled could lift the Djinn entirely from the script and be left with a functional, if highly melodramatic narrative, because the characters who are affected by the horror are actually having an interesting storyline on their own without his help. This is literally the first time any human has ever been interesting in a Wishmaster film, which is quite the accomplishment. It also uses its small, microbudget cast to its advantage, allowing them to play out an actual human drama between evil wish-granting murder sequences rather than attempt to spread themselves out as evenly possible to try and make the body count seem more robust than it is.

It's, dare I say, the most coherent story in the Wishmaster canon. Following immediately on the heels of the least, it comes as quite a shock. But apparently Mr. Chris Angel made the wise decision to have two different screenwriters pen the movies he was going to jam together in one sixteen-day marathon.  Scribe John Benjamin Martin hasn't written anything else I've heard of, but he's at least been working consistently, proving that other people down the line have also recognized his skill. Again, it's no masterpiece (we literally learn the basic exposition that Lisa owns a clothing store and runs it with her best friend at about the 45 minute mark), but it's the best script we've gotten in four movies and that's not nothing. 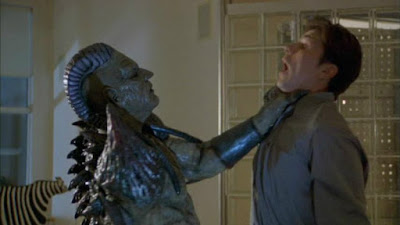 There are stakes and everything!

As for everything around the script, it's a little more on and off, but "on" more often than I could have ever expected going into it. While the kills continue to be pretty routine and uninspired (and involve a strip club way more than is strictly necessary), they are brought to life with a certain bloody gusto. A scene with a lawyer who is forced to rip out his tongue and slice off his own nose (in accordance with a cavalcade of atrocious puns delivered via phone by Djinn Steven) delivers a string of effects that can only be described as "gooshy." And a ridiculous scene where the Djinn crushes a man's fist produces a spray of blood so vigorous it splashed its way right into my heart.

Plus, there are effects scenes that actually attempt to create atmosphere, something that not a single Wishmaster movie has ever had on its mind. I'm thinking specifically of the eerie scene where Lisa finally jumps Steven's bones, and while they are softcore thrusting, a dozen scabby slimy demon hands reach out for her from behind. It's creepy, and it might only be for a few seconds, but it's the only few seconds this October that my skin has crawled.

This movie also improves upon the ridiculous, campy world-building of Wishmaster 3 (Look at me - I act like these films are in conversation with one another, which I'm pretty sure is legitimately impossible, but what else is one to do in a marathon like this?). Where that movie was briefly salvaged by a ridiculous cameo by the Archangel Michael, this one is given another shot of pure sugar by the Hunter, an ancient character with an overdubbed James Earl Jones voice who is sworn to kill the person who wakes the Djinn before she can fulfill the prophecy. This leads to a lot of Ren Fair cosplay and swinging swords around in a public park, which is hilarious.

You know what, I might just love this movie. I know it's cheap and lousy and exploitative and I'm supposed to hate it, but I can only think of compliments. Maybe watching all of these movies melted my brain. Maybe my perspective has been skewed by all the garbage I've shoved into my eyes over the years. Maybe Michael Trucco is just the right amount of mid-2000's handsome that my nostalgic lizard brain quieted all other complaints. 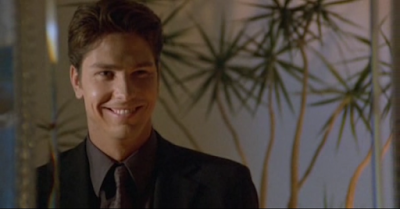 He's not even specifically my type, but there's something about the kind of guy who was "hot" when I was a pre-teen that is still magnetic to me.

What is true is that Wishmaster 4 has the best protagonist of the franchise. This is definitely a backhanded compliment, but for once the heroine has something other to do than lament about her psychic connection with the Djinn, cutting into his fun kill scenes with her ludicrous forced writhing. This movie features no psychic connection at all, to my immense relief. It's certainly only because that plot thread wouldn't work in a movie where the Djinn is actively trying to win her heart, but for whatever reason the screenwriter felt compelled to excise it, I am extremely grateful. As a result, she actually gets a story and an emotional arc to play with. Isn't that just lovely?

It's always a pleasant surprise when the final movie in one of these marathons isn't a massive stinking pile of rotten banana peels. In fact, I don't think this has ever happened in an October marathon. So I won't question it. I'll just leave the Djinn and his exploits with a fond farewell, and consider this a Halloween season well spent.

Oh, don't worry. Next year I'm certain to be forced to do some more sprawling, more excruciating project. I'm definitely running out at this point and there's a chilling silhouette that looks suspiciously like a Puppetmaster on the horizon.