Popcorn Kernels: Fangs For The Memories

Everyone, please welcome back our dear friend Scream 101! The podcast has risen from the grave for a second season, and this September we’re all about vampires. Please enjoy a set of mini-reviews about the first two flicks in the lineup.

Dracula (For the Scream 101 episode about this film, click here.) 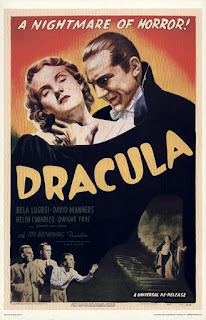 I do my best to approach classic horror with the respect it deserves, bringing as much context as possible to understand why people might have been scared of it back in the day, even if it doesn’t phase modern audiences. I get how Psycho shocked a post-Code audience and respect its tense thriller mechanics. I understand Halloween’s game-changing, stylish approach even if it doesn’t particularly spook me. And every time I watched The Exorcist… OK, The Exorcist is still terrifying. I’m just saying, I’m not speaking as a live Tweeting, torture porn-bred millennial when I say that the massively important, influential-even-to-this-day 1931 Universal smash hit Dracula is a pretty awful movie.

Please keep in mind that I don’t hate all Universal horror. Bride of Frankenstein is a doggone triumph. It’s just that Dracula is cut off at the knees twice over by its source material. While Dracula works well as an epistolary novel, its meandering, country-hopping plot is not the stuff of great cinema. And then our Dracula goes one step further by actually adapting its script from a stage play based on the novel, confining that addled narrative into one suffocating location.

The pacing chokes on its own blood as a handful of characters shout at one another, circling back to the same points over and over again. And far be it from me to knock an iconic performance, but Bela Lugosi is no Karloff. His slow-as-molasses line deliveries are just exhausting. The word “boring” is bandied about a lot when it comes to movies released more than a decade before our time, but Dracula truly earns that description.

There are exactly three things that are genuinely good about Dracula, and they are what prevent it from teetering over a precipice of despair and tedium. First is Dwight Frye, our Renfield. Frye just goes for it, bringing an immutable energy to the role that sends him careening up into the rafters, but appropriately sells the character’s stylized insanity. The second stems off from that over-the-top quasi-expressionism: the production design of settings that aren’t the main mansion. Dracula’s castle is an excellent chiaroscuro nightmare, and the staircase in his London hideout is a deliciously overwrought jagged cliff.

The third and final element is one scene, a bedtime conversation between Mina and Lucy that thrums with naturalistic chemistry, providing a tiny breath of fresh air between all the hammy tagines. But a couple gasps do not a full lung make. I’d rather be buried six feet under than spend an eternity with Dracula, and that’s exactly what this 80 minute expanse of celluloid felt like.

Let the Right One In (For the Scream 101 episode about this film, click here.) 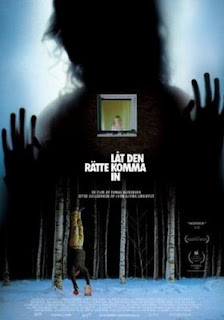 A young Swedish boy falls in love with the girl who moves in next door, only to discover that she’s a vampire.

I love the book Let the Right One In, as it’s one of the few works of modern literature that has turned my stomach as I was reading it. That might explain why I’m so chilly toward its film adaptation, which defangs most of its more questionable content in favor of a languorous arthouse vibe. Now I’ll be the first to admit that Let the Right One In is a great arthouse horror movie, but I’m well aware of what it could have been, which is supremely frustrating.

But it’s only fair, I suppose, to focus on what it is. Which is beautiful. Like many a Scandinavian film, Let the Right One In uses sprawling fields of snow as giant canvasses of negative space onto which it paints its frame. Given that vampire films tend to predominately feature blood, this aesthetic is especially suited for the subgenre, juxtaposing lurid reds against the pure white snowfall. This is especially especially meaningful when you consider that both our monster and our twisted protagonist falling for her are children, the traditional innocents.

Yeah, there’s a lot going on in Let the Right One In, though you might not suspect that from its sedate pacing. It truly succeeds in combining thoughtful, thematic imagery with intensely visceral horror, sometimes even in the same frame. Certain moments are achieved so elegantly that they could be framed and put in a gallery, even though they depict, say, a woman being engulfed in flame or a man burning off his own face with acid. … Maybe I’m being too harsh when I judge this movie for not being hardcore enough.

And let’s not discount the film’s love story, which is believably clumsy, childish, sweet, and dark. The two child actors are superb, especially Lina Leandersson, whose Eli has the eyes of someone who has seen a million lifetimes come and go.

Hell, Let the Right One In is terrific. I don’t love it, because I sometimes have trouble penetrating its icy exterior, but I’d be a liar if I didn’t sing its praises and recommend it to fans looking for more intellectual horror fare.